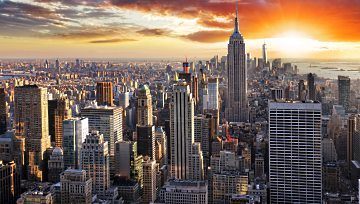 US Dollar Tempers Strength as EUR/USD, GBP/USD Bounce From Lows

- The US Dollar is pulling back from fresh one-year-highs after this week’s open saw a clean topside breakout in the currency. Prices gapped-higher on this week’s open and, to date, that gap hasn’t yet been filled. That gap shows around prior resistance of 97.00, and this becomes an area of interest for higher-low support. Traders should be careful as this could be a bull trap, and the pullback may not end exactly at that level, bringing to light a deeper area of potential support around the 96.47 level.

- Both EUR/USD and GBP/USD are catching a bid on the morning after aggressive bearish runs pushed each pair-lower to open this week. On GBP/USD, a bit of optimism has begun to show on the Brexit front that Theresa May’s cabinet may be near agreeing on a deal. This wouldn’t be the first time that hope has impacted prices, and the big question is whether it can remain. On EUR/USD, the Italian budget is due in Brussels today, and it remains to be seen whether the Italian government will cave to Brussels’ demands (probably not) and if they don’t, what might the European Commission do in response?

US Dollar Pulls Back as EUR/USD, GBP/USD Bounce From Support

It’s a pullback kind of morning thus far as some of the more active recent themes are putting in counter-trend moves. The US Dollar is pulling back from new one year highs to go along with EUR/USD bouncing from fresh one-year lows. A bit of optimism has crept back in on the Brexit-front, and that’s helped GBP/USD to recover after a very bearish start to the week. And even equities have caught a bid overnight, following another sizable sell-off in US markets yesterday.

But a number of issues remain that can continue to prod volatility, and pressure points like the Italian budget and Brexit discussions will populate the headlines in the coming days. This goes along with a rather busy economic calendar, as tomorrow brings inflation prints from the US and the UK, and Thursday brings US Advance retail sales figures, and this will be the first look at US consumer behavior data from the month of October. 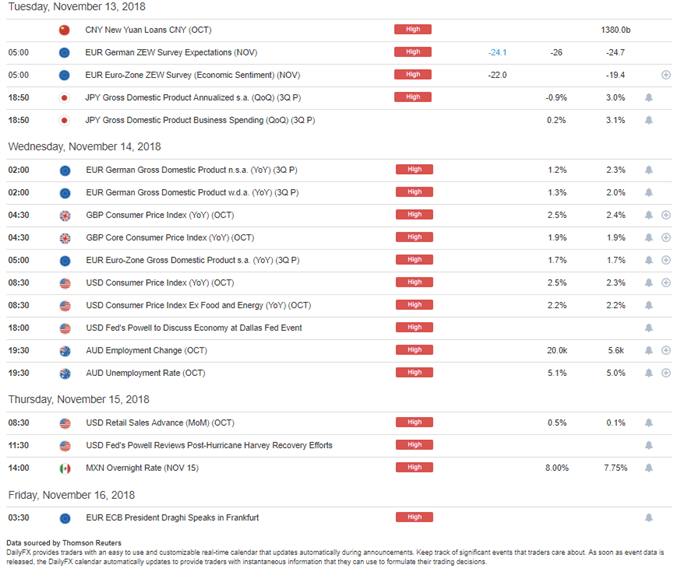 The downside breakout in EUR/USD put in a strong run after this week’s open. Prices continued to sell-off into the US close until a recovery rally began to show, and so far that low has held as sellers have pulled back following a move of almost 300 pips in less than a week.

Support is coming in from an interesting area around the 1.1212 level, which is the 61.8% Fibonacci retracement of the 2000-2008 major move in the pair. This price was in play for almost two years, helping to set intra-month resistance while EUR/USD traded in a range from March of 2015 into May of 2017.

On a shorter-term basis, the pair has been moving-lower in a bee-line since last week’s resistance test at 1.1500. This was the top-end of a zone that I was following for resistance in the pair in last week’s FX Setups of the Week, and that shift caught an assist from the underside of a trend-line projection connecting August and early-October swing-lows.

Since then, sellers have been in charge and there has been little slowdown in the bearish move until this current pullback started overnight. With prices now bouncing, there are a couple of areas of interest for lower-high resistance taken from price action over the past few months. The 1.1300 level was fairly strong support, and it took sellers three attempts to break-through, so this could be a very obvious level to look for resistance at prior support. A bit higher is another area of interest around the 1.1355 area.

Going along with that decisive run in EUR/USD over the past week has been a mirrored move in the US Dollar as the currency jumped up to fresh one-year highs after this week’s open. There still remains some unfilled gap around the 97.00 level, and this was an area of prior resistance that remains interesting for support potential.

Given how obvious this level is, this may be a bull trap, and selling pressure to get down to this area may not just cease once it comes into play; so traders would likely want to have some alternative plans for working with support should that turn out to be the case. A bit deeper brings another area of interest into play, and that runs around 96.47, which is the 23.6% Fibonacci retracement of the 2011-2017 major move in the currency.

GBP/USD: Cable Fills the Gap, Can Sellers Hold the Line?

The Sunday open brought another noticeable gap into the fold, and this one was in GBP/USD. The pair had closed last week with support at the 50% marker of the late-October bearish move. Prices gapped-down by 50 pips, and retraced a portion of the move before sellers got back to work. But, as discussed yesterday, that gap did not completely fill, and this area offered lower-high resistance potential for bearish approaches in GBP/USD.

No more than 24 hours later and there’s a bit of calm developing on the Brexit-front. Will it last? That remains to be seen, but price action in the pair has started to soften after a test of lower-high resistance around this area. This could possibly open the door to short-term approaches but, for those taking a longer-term stance on the pair, they would likely want to wait for the range of the past few months to first give way before looking for bigger-picture trade ideas.