GBP/USD: Cable Gaps Down to Start a Big Week for the British Pound

- The British Pound is heading lower to start a big week for the currency, as a number of data releases are on the calendar to go along with more twists and turns on the Brexit front. To read more about Brexit dynamics and impact on the British Pound, our own Justin McQueen discussed this in the article entitled, GBPUSD Vulnerable to Larger Losses as PM May Looks into the Brexit Abyss.

- Last week saw strength in GBP/USD as the pair re-claimed ground above the 1.3000 handle; but that theme began to reverse last Thursday ahead of the FOMC rate decision and sellers have been in-control ever since. This continues three months of rather aggressive mean reversion in the pair.

- Quarterly Forecasts have just been updated, and the Q4 forecast for GBP/USD is available from the DailyFX Trading Guides Page. If you’re looking to improve your trading approach, check out Traits of Successful Traders. And if you’re looking for an introductory primer to the Forex market, check out our New to FX Guide.

Another week, and yet another twist has shown up in the ongoing Brexit saga. While last week brought positivity and optimism around a Brexit deal with the British Pound re-claiming the 1.3000-handle, this week has seen the return of worry and skepticism, and this has pushed GBP/USD right back below the key psychological level. The currency is now extending a three-day sell-off that started last week ahead of the Thursday FOMC rate decision. This includes a gap-lower to start this week’s trading which, at this point, remains unfilled as sellers have been so actively pushing the offer that they wouldn’t allow for prices to retrace back to last week’s close.

On a longer-term basis, this extends the frenetic mean reversion that’s been playing out in GBP/USD since mid-August. To be sure, the US Dollar has some blame here as well as the US currency has gone through its own fits and starts over the past three months. But a large portion of the drive in the pair is coming from dynamics in the British Pound which are, of course, being driven by the continued lack of certainty on the Brexit-front.

This Week is Big for the British Pound

It’s a big week for British data on top of what’s taking place around Brexit, and this will likely keep the Pound on the move in the near-term. Tuesday brings jobs and wage numbers, Wednesday brings October inflation data and Thursday brings retail sales figures.

On the Brexit front, last week brought hopes of a deal being near and this week has seen that hope take a step back. The impasse over the Irish border backstop remains, and despite sources indicating that a deal was close last week, negotiators worked until late this morning and as yet, no resolution has been found. This puts the planned EU-UK summit that was being set for later this month in jeopardy, and tomorrow’s cabinet meeting that was originally being expected to hammer out the fine points of the UK’s negotiating position will likely be re-purposed to discuss no-deal planning. 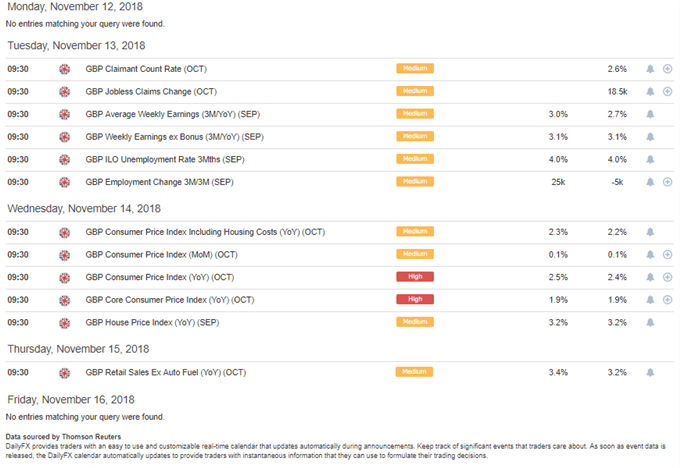 As discussed in the prior GBP/USD technical article, the longer-term setup here remains sub-optimal as prices have been caught in this bout of mean reversion for more than a quarter of this year. This type of environment can normally bring on the potential for trading ranges but, as can be seen from the below chart, even that theme has had little consistency, as driven or pushed by headlines, as the pair has put in very little formality in the way that mean reversion has played out.

On a near-term basis, with the pair displaying as much volatility as it has, there may be some workable themes for short-term traders. This morning’s gap represents an area of interest for lower-high resistance potential for those looking to take on short exposure. This area comes in right around the 50% marker of the prior major move, focusing on the down-trend in the pair from the second half of October. And on the long side, the area around 1.2700 may be interesting depending on how prices perform on a re-test. This area had helped to provoke a higher-low during the October deluge; and until that low is taken out, it brings support potential upon another failed test to break down to fresh lows.