- This week’s calendar has a heavy emphasis on the British Pound, with U.K. inflation released tomorrow and a Bank of England rate decision on Thursday.

- While the British Pound has been rising, retail traders have been selling. IG Client Sentiment currently sits at an elevated -2.28 for GBP/USD, and given the contrarian nature of retail traders, this is bullish.

- Want to see how GBP, and USD have held up to the DailyFX Q3 Forecasts? Click here for full access.

Last week closed on a sour note for the U.S. Dollar, as the currency continued the 2017 down-trend after having set a fresh 2.5 year low earlier on Friday morning. This extends the U.S. Dollar’s downside run beyond the 12% marker for this year, and even a dovish ECB meeting last week was unable to reverse the trend, as Euro bulls ran through Mario Draghi’s dovish comments in anticipation that the ECB will inevitably need to push policy into a less loose state before the end of the year.

But while much of the world was watching the Euro or the Dollar, something interesting began happening under the surface, and that’s a firm bout of strength beginning to show in the British Pound. While the Euro strengthened against the Dollar and the Yen last week, strength in GBP far outpaced what was seen in the single currency, and EUR/GBP has retraced approximately 220 pips since setting a fresh high no more than two weeks ago. This exposes the psychological level of .9000 in EUR/GBP for potential support plays, and this helps to show how aggressively Sterling bulls have been pushing the envelope so far in September.

On Friday, we discussed what may be behind this current run of GBP-strength, and this is likely very similar to something that we saw earlier in the year, when markets were bidding the Pound-higher in anticipation of the Bank of England tweaking policy to be less loose in order to account for rising inflation within the economy.

This was something that we knew going into Brexit, and we warned of as such by BoE Governor Mark Carney. Ahead of the referendum, Mr. Carney said that a decision to leave would entail a sharp repricing in the value of the British Pound, which could lead to higher levels of inflation, higher levels of unemployment and slower levels of growth as the country waded through Brexit negotiations. This would put the Central Bank in the unenviable position of having to choose a path: Either tighter policy to rein in inflation, which could potentially hit both jobs and growth. Or, loosen policy to support growth and employment, even at the behest of heavier levels of inflation down-the-road. It wasn’t more than a week after the referendum that the BoE showed their hand, warning that they were prepared to launch a bazooka of stimulus to further support the British economy before Brexit discussions got underway.

The net impact of that bazooka of stimulus was a deeper tanking in GBP spot rates. And this further exposed the British economy to unsavory rates of inflation. The Bank of England, like many other Central Banks from developed economies, keeps a 2% target for inflation. In many of those other major economies, inflation remains subdued below their targets; but in the U.K., inflation has been well-above target for six months now. On the chart below, we’re looking at inflation prints since the Brexit referendum, and notice the discouraging trend taking place for the BoE.

UK Inflation Since August, 2016: Above 2% Target Since February 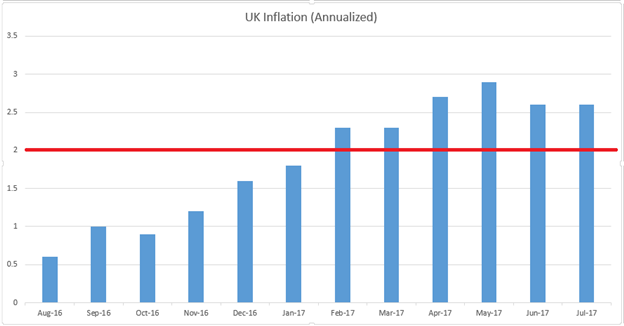 As inflation began to tick above the 2% target, markets began to build in the expectation for the BoE to eventually walk away from their uber-dovish policy. This theme appeared to hit fever pitch in June, after May’s inflation came-in at a whopping 2.9%, we saw three dissenting votes within the MPC at the Bank of England’s rate decision, which represented the most votes for a rate hike in the U.K. since 2011. The week after that saw the head of the BoE, Mr. Mark Carney himself, opine that ‘rate rises may be on the horizon.’ This was seen as the potential first step in capitulation that may, eventually, lead to a less loose stance from the Bank of England.

This lasted all the way until the Bank of England’s Super Thursday in early August, in which the BoE appeared to be unmoved by the rising inflation seen within the U.K. economy. And given that June and July inflation came-in a bit more subdued from May (2.7% versus 2.9%), this was seen as a temporary removal of pressure from this theme, and for the first three weeks of the month, the British Pound gave up ground to pretty much any major currency.

But over the past few weeks, the British Pound has come back to life. Tomorrow brings inflation for the month of August, and two days after that, we get a Bank of England rate decision. This rate decision will not bring updated forecasts or projections from the BoE; but from the mounting strength being seen in the British Pound, we can see where at least some investors are expecting the bank to take a more hawkish stance at their rate decision on Thursday. This has lifted GBP/USD above a key Fibonacci level at 1.3117, which is the 38.2% retracement of the ‘Brexit move’ in the pair, and a level that had previously helped to set some temporary resistance back in mid-July.

Sterling Strategy for This Week

For those looking to fade this recent batch of GBP-strength, EUR/GBP will likely remain as one of the more attractive options, particularly if we can see some support build around that psychological level of .9000. On the other hand, for a continuation of GBP-strength, traders will likely want a bit more information before looking to chase this rather young theme.

For GBP/USD, a support check at 1.3117 could open the door for top-side exposure, with targets cast towards prior highs around 1.3250. Conversely, should a break of August resistance take place before support showing at 1.3117, traders can look for secondary resistance around the 1.3500-handle, followed by higher-low support plays at 1.3350, or 1.3250.