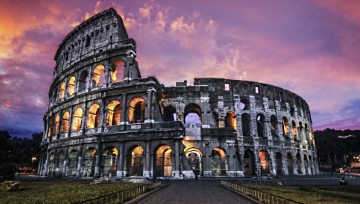 - The ECB made no changes to policy at this morning’s rate decision; they did increase forecasts for GDP growth while reducing inflation expectations.

- The Euro remained rather strong throughout the rate decision and press conference, seemingly pointing to the fact that markets are simply steering expectations for ‘less loose’ policy to the ECB’s meeting in December.

- Sentiment in EUR/USD remains elevated, currently showing -3.01. Given retail sentiment’s traditional contrarian nature, this is bullish for the pair.

- Want to see how Euro, and USD have held up to the DailyFX Q3 Forecasts? Click here for full access.

At this morning’s European Central Bank rate decision, market participants walked-in with the legitimate prospect of hearing how the ECB may look to taper their asset purchase program ahead of the designated end date of December 2017. Throughout this year, European economic data has remained strong, further highlighting signs of recovery in the Euro-Zone and this has led to many calls, from both within the bloc and outside for the ECB to begin stepping away from their massive stimulus program. In response, the European Central Bank raised their growth forecasts for the economy this year, now expecting 2.2% GDP growth in 2017 versus an earlier projection of 1.9%. This would be the fastest growth rate in the Euro-Zone since 2007, and normally this would be purely a bullish factor. But normal isn’t really normal when referring to monetary policy at the present moment in time as Quantitative Tightening comes closer to reality.

Also within this morning’s updated projections was a cut to inflation forecasts. The ECB is now looking for inflation of 1.5% for this year and 1.2% for 2018. Previously the ECB was looking for 1.5% for 2017 and 1.3% for the year after, so this is effectively cutting inflation forecasts while simultaneously boosting growth expectations. The difference between the two is the Euro spot rate, which remains well-above the ECB’s expectations and can act as a further hindrance to inflationary growth, and this is likely why the ECB continues to expect inflation to remain subdued below their 2% target.

Nonetheless, the Euro rallied throughout this morning’s rate decision and press conference, further reiterating the theme of market participants trying to front-run a stimulus exit that the ECB seems want to avoid.

This has been somewhat of a brewing theme throughout this year. When ECB President Mario Draghi was asked whether the bank had discussed stimulus exit at the rate decision in April, his denial helped to bring the Euro down to support, and this lasted for about two weeks until bulls came-in to push the currency higher. A very similar reaction was seen in June, when Mr. Draghi denied that the bank had discussed exiting from their stimulus program, EUR/USD moved down to support, stayed for a couple of weeks before bulls were able to lift the currency higher-again. But in July, this began to change: When asked point-blank whether the ECB had discussed stimulus exit, Mr. Draghi again denied; but this time Euro buyers were undeterred and continued to bid the single currency higher. 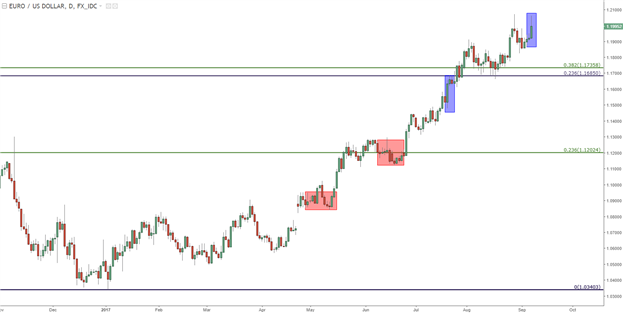 This brought EUR/USD into August at 2.5 year highs, and after spending most of the month in a range-bound fashion, Mario Draghi’s speech at Jackson Hole towards the end of the month prodded another boost to the Euro, with EUR/USD finally taking-out the 1.2000 psychological level. Mr. Draghi did not signal anything in that speech, and he pretty much avoided monetary policy altogether, instead choosing to discuss the benefits of open borders and immigration. Nonetheless, Euro bulls took that omission as a signal to load-up on long positions, and since then the Euro has remained relatively strong as bulls have continued to respond to support.

EUR/USD Four-Hour: Bullish Response at Jackson Hole (in Blue) After Digestion in August 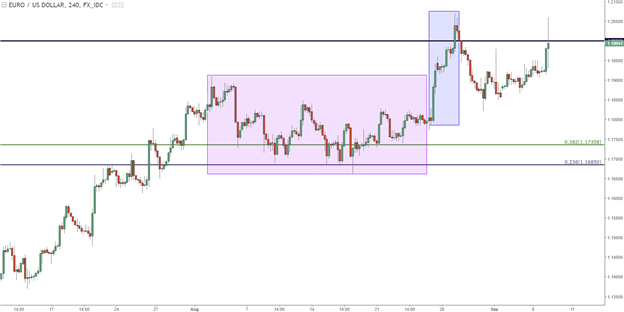 As we came into this morning’s rate decision, the big question was whether or not the ECB was finally ready to roll out plans for stimulus exit. The ECB seems reticent to do so out of fear of continued Euro-strength from markets trying to front-run any potential tightening. This is somewhat of the opposite scenario that the ECB had helping in 2014-2015. When the bank initially announced their stimulus program in the summer of 2014, this was like a screaming beacon to traders looking to use the Euro as a funding currency. EUR/USD tanked all the way until March of 2015, which perhaps coincidentally is when the ECB’s program actually began buying bonds (this is indicated in green on the below chart). The major bulk of the move happened before the program ever started; and now we have somewhat of the opposite effect where traders are buying the Euro in anticipation of the ECB having to make a move away from ‘less loose’ monetary policy. 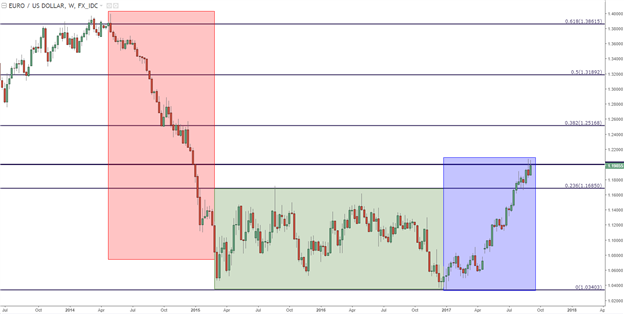 With this morning’s deferral from Mr. Draghi, we’re likely going to see market participants simply steer that bullish expectation for a move towards less loose monetary policy for December. This is likely why we’re still seeing a bullish response in the Euro despite the fact that the ECB continues to remain dovish around inflation. Traders can look to move-forward with a bullish stance on the single currency, looking to buy ‘higher-low’ support as market focus shifts towards that December ECB meeting.

With current resistance showing around the 1.2000 psychological level, this could be an excellent setup for the trader to allow some development. If prices are able to take-out the prior high at 1.2072, this can open the door for higher-low support to show around 1.2000. If we don’t get that fresh high, there are two support zones that could be interesting for continued top-side plays in EUR/USD.

For those looking at long Euro exposure away from the U.S. Dollar, EUR/JPY could be an interesting option, as we discussed yesterday. 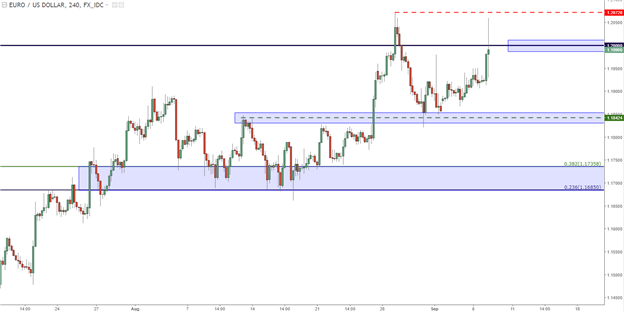