- Next week brings an interesting economic calendar, with the highlights of U.K. inflation on Tuesday and Central Bank rate decisions out of Switzerland and the U.K. on Thursday.

- Dollar weakness remains a dominant theme, but perhaps more surprising is the recent run of strength in the British Pound. Are we seeing traders load-up with longs ahead of next week’s inflation print?

- Sentiment in both EUR/USD and GBP/USD are elevated, currently showing -2.91 and -2.23, respectively. Given retail sentiment’s traditional contrarian nature, this is bullish for the pair.

Next week’s calendar is fairly full with drivers on key themes, and in the week after we hear from the Federal Reserve at a pivotal meeting in which the bank is expected to take the next step towards the highly-untested route of balance sheet reduction. For next week, the big items for currency traders are U.K. inflation released on Tuesday, Australian Employment on Wednesday night and Central Bank rate decisions out of Switzerland and the U.K. on Thursday. Below, we look at three of the more pressing themes in FX markets as we approach this batch of drivers.

EUR/USD continues to show strength after yesterday’s ECB rate decision. While Mr. Draghi echoed his dovish tone from previous meetings, markets continue to anticipate some element of tightening from the European Central Bank in the not-too-distant-future, and this shows as the spot rate in EUR/USD continues to climb. What is perhaps a bit more interesting, however, is how the Euro has performed against other currencies since yesterday’s rate decision, which we’ll look at a bit more below.

The big question around EUR/USD at this point is where resistance may actually begin to show. The pair has rocketed through multiple resistance zones already this year, and just above current prices are a couple of Fibonacci levels that could bring some additional sellers into the market. At 1.2133 we have the 50% retracement of the 2000-2008 major move in EUR/USD, and at 1.2166 we have the 50% retracement of the ECB QE move that takes the 2014 high down to the 2017 low.

While the Euro has been really strong against the U.S. Dollar, the British Pound has been even stronger over the last 24 hours. There are a couple of key releases on the U.K. calendar for next week: Inflation is released on Tuesday and the Bank of England has a rate decision scheduled for Thursday. Given the appearance of GBP-strength of recent, this would indicate that at least some market participants are expecting next week’s CPI print to come out above expectations. This has pushed EUR/GBP down to support above .9100 as Sterling strength has outpaced Euro demand so far this week. If we do make it down to the psychological level of .9000, support plays could become interesting for bullish continuation approaches in the pair. 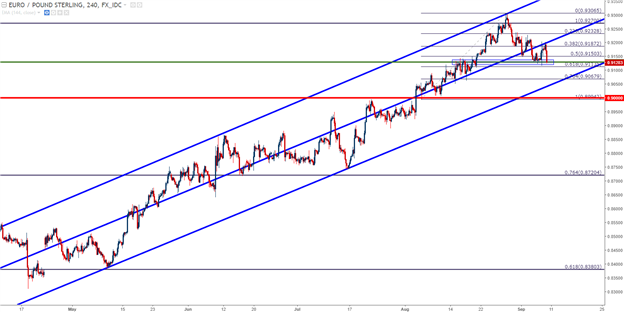 This week’s advance in Cable has been rather significant, especially if we consider how bearish the currency has been since Brexit. We’re now sitting less than 50 pips away from the 2017 high in GBP/USD, and this morning’s run has seen prices sustain a break above a key Fibonacci level at 1.3117, which is the 38.2% retracement of the ‘Brexit move’ in Cable, and this level had helped to set resistance on a couple of different occasions: with yesterday’s Daily bar along with a three-day sequence in mid-July. This could be an interesting level to watch for support as we go into next week’s UK/GBP drivers of inflation and the BoE. 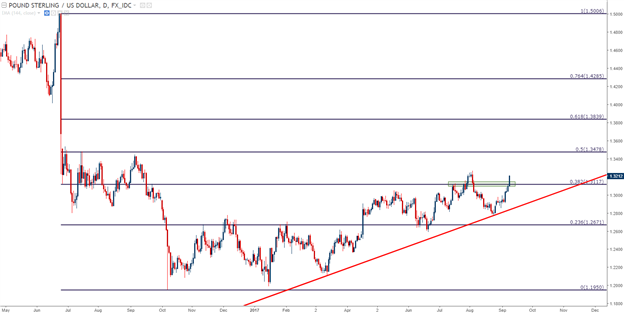 From the above three charts, we can surmise just how incredibly weak the U.S. Dollar has been, as the Greenback has lost ground to both the Euro and the British Pound this week. This furthers the 2017 trend in USD that’s been pretty nasty, all-the-way-around. A pivotal FOMC meeting looms large on the calendar for the week after next (rate decision announced on Wednesday, September 20th).

Meanwhile, the U.S. Dollar continues to perch down to fresh lows. While a portion of this is likely related to that continuation of Euro-strength after Draghi’s outlay at yesterday’s ECB meeting, there may be another factor driving prices here: Japan. In the overnight session 2nd quarter GDP out of Japan was revised down pretty massively. The revision took 2Q GDP growth down to 2.5%, which isn’t bad; but it’s a far cry away from the original 4% print that we heard on the initial release. Also of issue – radiation was found in South Korea, confirming fears that North Korea was not bluffing when they claimed to have detonated a hydrogen bomb just five days ago. As recently as yesterday reports indicated no radionuclides identified after that test, giving rise to the hope that NK was bluffing. But after finding Xenon in air samples, it’s become clear that the North has thermonuclear power to unleash and the plot in this drama has thickened again.

The net of these two drivers was a break of the range in USD/JPY that’s held for the better part of the last five months. The more the situation around North Korea festers, the more vulnerable the Yen is to additional strength, which comes at a politically difficult time for Japanese PM Shinzo Abe. Current support in the pair is showing around the psychological level of 107.50, but if we hear of additional tests over the weekend or more provocation from either side, expect additional Yen-strength with potential tests of support at 106.50 and then 105.00 in USD/JPY. 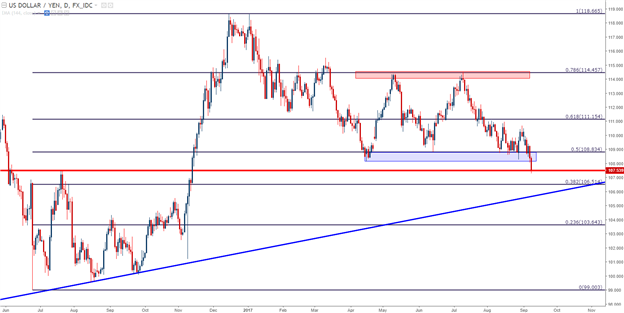