Dollar Drop Crosses 12%: Can Inflation Turn the Tide Ahead of the Fed? 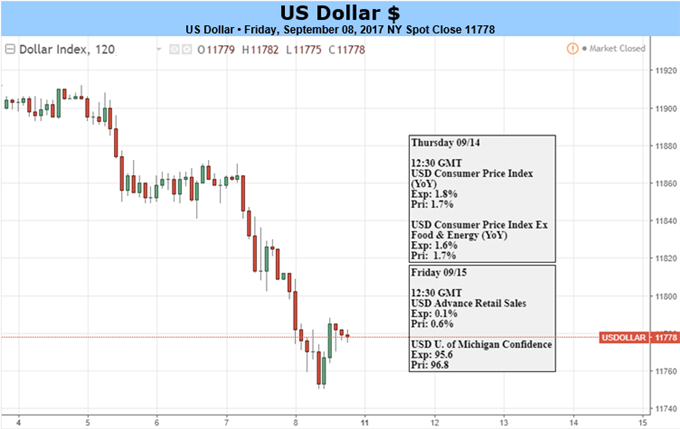 The U.S. Dollar extended its bearish run this week, as ‘DXY’ moved-down every day, Monday thru Friday. This now accounts for a drop of -12.34% from the DXY high on the second trading day of the year down to this morning’s low. After a doji had shown up on Wednesday above last week’s fresh 2.5 year low, there appeared to be a legitimate chance of USD finally putting in some element of retracement in this well-heeled bearish trend. But another dovish ECB outlay was unable to reverse the bullish course of the Euro, and in response the Dollar continued to show weakness as traders have attempted to get in-front of any potential tightening moves from the European Central Bank, whenever that might happen.

On that topic of tightening: Skepticism continues to grow around whether the Fed will be able to achieve their four additional rate hikes going out to the end of next year. After coming into 2017 riding high on the wave of the reflation trade, the Fed felt confident enough to start talking about balance sheet reduction when they hiked rates in March. Matters haven’t really been the same since, and the U.S. Dollar has been in a continual process of getting slammed-lower. In an ironic twist of fate (or interest rate dynamics), inflation in the U.S. has been dwindling-lower for much of the year, with annualized inflation peaking at 2.7% in February. In March we saw 2.4, April at 2.2, May at 1.9 and June all the way down to 1.6%. July finally brought respite to that down-trend when inflation printed at 1.7%, but this is still well-below the Fed’s target of 2%; so is there that burning need for more rate hikes as the Fed begins this highly-untested route of balance sheet reduction?

Markets appear dubious. While the Fed has said they are expecting four rate hikes out to the end of 2018, markets are currently pricing in one going out to August of next year. Given how timid the Fed was around prior rate hikes after years of ‘emergency like’ accommodation, this divergence makes sense, especially considering the introduction of balance sheet reduction. Next week brings the next piece of data for the inflation puzzle, as CPI for the month of August is released on Thursday morning. The expectation is for a 1.8% print, which would continue July’s trend of improvement. Given that this will be the last piece of inflation data before the Fed’s two-day meeting taking place the week after, we will likely see considerable attention paid to this print. At that FOMC rate decision on September 20th, the Fed will be releasing fresh forecasts and expectations, and continued lackluster inflation will likely have some impact on the Fed’s projections and, in-turn, market expectations.

Also of note for USD price action is the brewing situation with North Korea. The rising threat of conflict with North Korea has kept markets on edge, with brief bouts of risk aversion seen over the past few weeks, which have seemingly been USD-negative/Yen-positive. A simple or constructive resolution has yet to avail itself, and one does not appear to be nearby. While military options may sound a bit aggressive, the fact of the matter is that Kim has thus far refused to back down. He’s continued to step up the provocation after China banned North Korean imports of iron, lead and coal; all of which are key exports and an important lifeline for the Hermit Kingdom. China made this announcement in mid-August, clearing all goods that were already in port until September 5th, which was this Tuesday. This can add pressure into an already pensive situation, as economic pressure within a dictatorship has a tendency to flow upstream and this is certainly something that traders are going to want to keep a watchful eye on.

The forecast will be set to neutral on the U.S. Dollar for the week ahead. While the downtrend is attractive, the Dollar is incredibly oversold and with a key Fed meeting on the docket for the week after next, profit taking from bears ahead of FOMC could potentially offset additional bearish drivers that might show up. If Thursday’s inflation comes-in at 1.6% or less, expect more selling in the Greenback.