Pound Tests Support as USD Attempts to Build a Bullish Base

- Today is expected to be rather light in the U.S. session as a light calendar leads into a big two-day event with Fed Chair Janet Yellen delivering the bank’s twice-annual Humphrey-Hawkins testimony tomorrow.

- Since the start of Q3, the U.S. Dollar has attempted to build a bullish base while Euro strength continues to rage.

Today is expected to be a rather light day across American financial markets, as a thin economic calendar leads into a really big two-day event beginning tomorrow with the start of the Federal Reserve’s twice-annual Humphrey Hawkins testimony. Tomorrow will see Fed Chair Janet Yellen testify in front of the House of Representatives and on Thursday she’ll speak in front of the Senate. These proceedings will generally begin with the Fed Chair offering a statement, after which the floor is opened for questions. And those questions can be far-ranging, from the topics of bank supervision to income inequality; but markets’ attention will likely be focused squarely on any comments around monetary policy, specifically looking for signs around the topic of balance sheet reduction.

The bigger question is whether Chair Yellen can inspire any lasting strength in the Greenback. The Dollar has had a rough 2017 after a big move to close-out last year. After running up to fresh 14-year highs to start the year, the Dollar has been through a pain chain of bearish drive that’s sent the currency lower by more than 8%. This, of course, comes from a combination of factors: Key of which has been the fact that growth and inflation numbers in the United States have begun to slow while Europe has started to show more robust signs of recovery. This has driven bets behind the long-Euro trade under the presumption that the European Central Bank would move off of their extraordinary stimulus measures later in the year.

EUR/USD Remains Near Resistance, 14-Month Highs Ahead of Humphrey-Hawkins 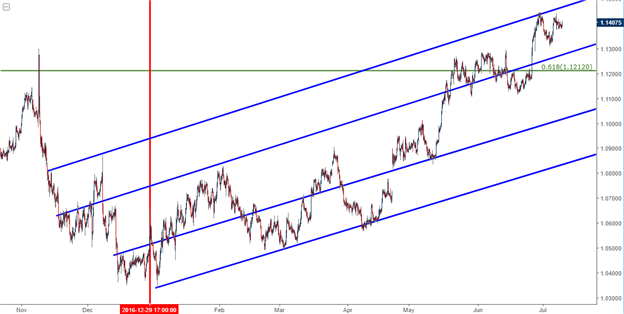 While the Euro trend has been heating up, the British Pound has been rather late to join the party. After the results from the early general elections in June provided even more cloudiness around Brexit, the early signs of a shift within the Bank of England had driven prices back-above the vaulted 1.3000 psychological level to close out June and Q2. But since then, prices have been retracing, with this week’s price action opening-up to test the 38.2% retracement of the most recent bullish move, and this has produced a bull flag formation, as shown below. 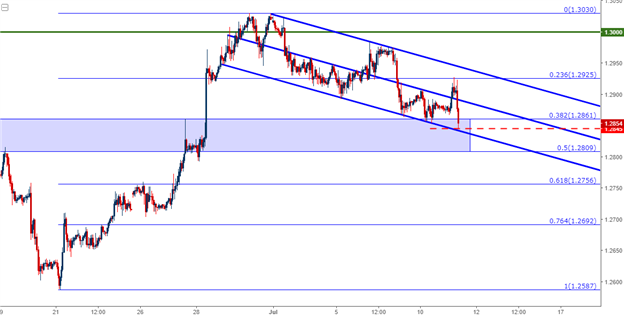 Comments from BoE Deputy Governor, Ben Broadbent earlier this morning have brought some additional weakness to GBP/USD, and at this point, prices are running into this zone of support from 1.2809-1.2861. The big question at this point is whether bulls will show up to support the move or whether we’ll be dealt a deeper retracement before the bullish trend either a) comes back to life or b) gets eradicated by an oncoming of sellers. Regardless of the outcome, prices near support with the prospect of trend continuation can open the door to some attractive risk-reward ratios for topside setups.

USD Attempting to Build a Bullish Base

The Dollar set a fresh 10-month low as we were closing Q2, but since then prices have yet to set a new low in ‘DXY’. This is despite numerous attempts from sellers, each of which has been met by buyer support. So, while the U.S. Dollar has been extremely weak on a longer-term basis, over the past week and a half there are semblances of what could turn into a bullish move.

On the chart below, we’re looking at ‘DXY’ with a Fibonacci retracement applied over the most recent major move. Notice how prices are currently finding support on the 38.2% level, and this can open the door to short-term bullish USD strategies looking for bullish continuation in the U.S. Dollar.

U.S. Dollar Hourly Chart via ‘DXY’ – is Q3 bringing back the bullish Dollar? 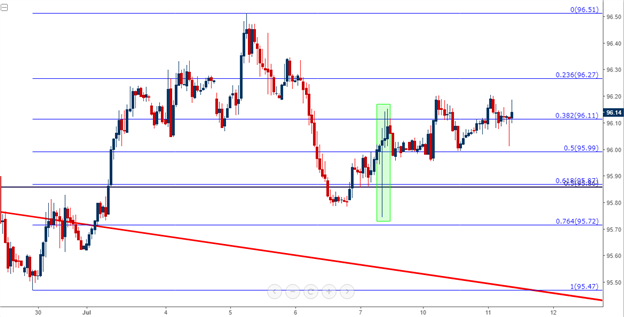