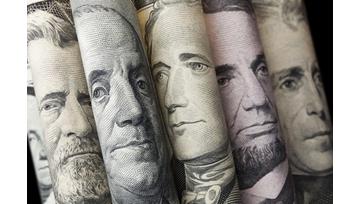 - This week’s economic calendar is back-loaded, with little by way of excitement until Wednesday and Thursday of this week. Wed marks the start of the Fed’s twice-annual testimony in front of Congress, and the Bank of Canada announces an interest rate decision.

- The U.S. Dollar remains near 10-month lows as we open another big week, and pain is continuing to show in Gold prices despite this continued USD-weakness, highlighting the ‘reflation’ trade that’s been driving price action of recent.

This week is another big one for the U.S. Dollar, as the currency remains pinned-down near 10-month lows. The primary drivers for this week will likely come from Fed Chair Janet Yellen’s two-day testimony in front of Congress, set to take place on Wednesday and Thursday. During this twice-annual Humphrey Hawkins testimony, Chair Yellen will brief both houses of Congress on current financial conditions while fielding questions from the House on Wednesday and the Senate on Thursday.

It was at Humphrey Hawkins in February of 2016 that Janet Yellen helped to kick-off a bullish reversal in Equities and Oil. After the first rate hike from the Fed in December of 2015, markets opened 2016 on a troubling note as both stocks and Oil sold off for the first six weeks of the year. But when Chair Yellen took the podium on day two of her testimony on February 11th, 2016, she said that the Federal Reserve would not take any policy options off-the-table in the effort of shoring up American markets, including the prospect of negative rates. In short order, a low was set in Oil prices and equities were off to the races.

With such an intense focus on the prospect of balance sheet reduction in tandem with rate normalization, will this be the opportunity for Chair Yellen to introduce more structure around the bank’s upcoming plans? And if so – what can she say that might reverse the rather aggressive trend of weakness in the Greenback that’s plagued the currency for much of the year?

On the chart below, we’re looking at that 2017 run in the U.S. Dollar as price action remains pinned-down near support in the lower-portion of a bearish channel. 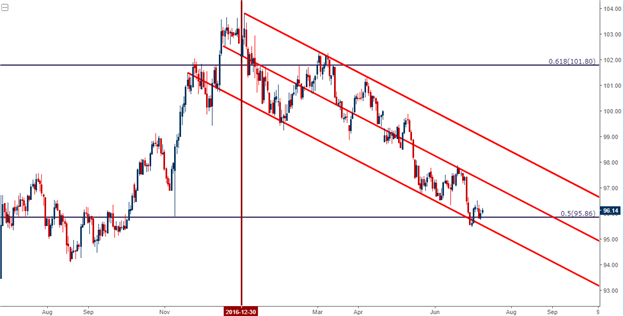 Over the past few trading days, we can see where the U.S. Dollar has attempted to build-in a bullish structure, basing over the key Fibonacci level at 95.86. Non-Farm Payrolls on Friday produced a spike in price action, at which point buyers drove prices to fresh short-term highs. Buyers showed-up again to offer higher-low support around the 96-handle, and have opened this week by bringing prices up to another fresh near-term high. This could be the initial stages of a bullish move in-front of Chair Yellen’s speech later this week: 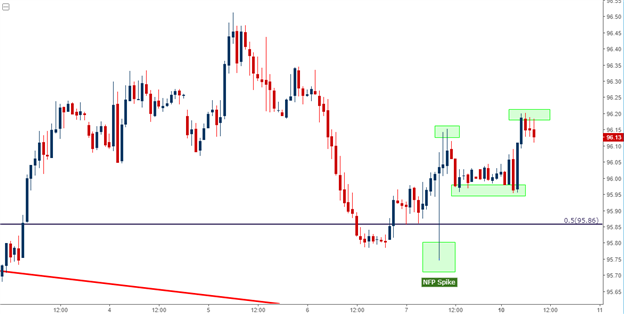 As we’ve been discussing, while the U.S. Dollar has been very weak lately, the Japanese Yen has been even-weaker. This is likely driven back to the ‘reflation’ trade and the prospect of rising inflation forcing Central Banks away from the easy-money policies that have become so commonplace. While inflation continues to tick-higher in the U.K. and Europe and, to a lesser degree, the United States; Japan continues to lag and there is even less hope for the BoJ to exit stimulus than there is for the ECB or the BoE. So, this can keep the Yen weak as the favored ‘funding currency’ as rates in Japan stay low while rates everywhere else tick-up, even if by miniscule amounts.

USD/JPY put in an attractive reaction around NFP on Friday, with a quick spike down to a key support level around ¥113.50 before buyers took over and drove prices up to fresh highs. USD/JPY is now approaching the May high at ¥114.37 and just above that, at ¥114.50, we have a long-term Fibonacci level that could offer some resistance, as this is the 23.6% retracement of the ‘Abenomics’ move in USD/JPY. 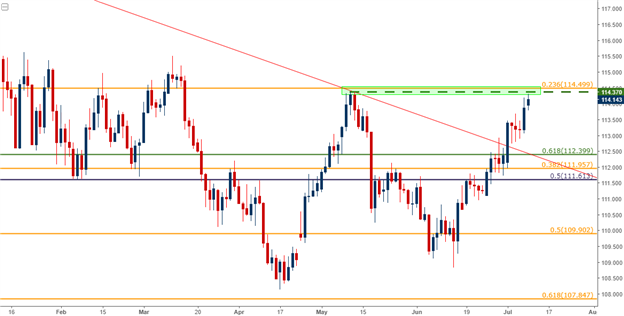 For traders looking to add bullish exposure in USD/JPY, a pullback can open the door to trend continuation strategies. On the chart below, we’re looking at three potential zones of support for trend-followers to watch in the pair ahead of Chair Yellen’s testimony on Wednesday/Thursday. 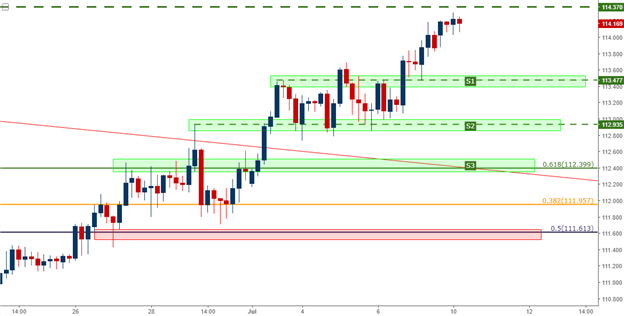 Probably the most pronounced trend of 2017 has been in the Euro. What started-off rather quietly as we walked into two pivotal election cycles in Holland and then in France, the bullish theme in the single currency has absolutely taken-over to be one of the most interesting and, likely, unexpected themes of the first half of the year.

As we move deeper into the second half of the year, there are some very big questions for Mario Draghi and the European Central Bank to answer. Markets have cast their gaze towards an ECB meeting in September, as this is the next opportunity for the bank to update inflation forecasts. But at each opportunity, bulls have shown-up in a rather aggressive fashion to further this bullish theme in the Euro that’s become rather prevalent so far this year. 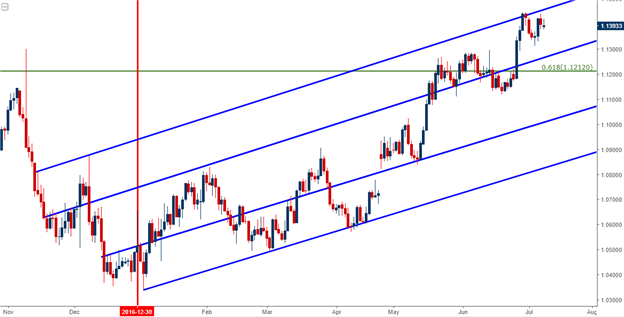 As we discussed in this week’s fundamental forecast for the Euro, there is little on the calendar for the Euro nor are there any Mario Draghi speeches. This can be an opportune time for Euro bulls to ‘show their hand’, and if a larger move of strength does develop in the U.S. Dollar, this can expose longer-term support levels in EUR/USD that can open the door to bullish continuation approaches. On the chart below, we’re looking at three potential support areas to follow on EUR/USD this week in the effort of longer-term, bullish trend continuation. 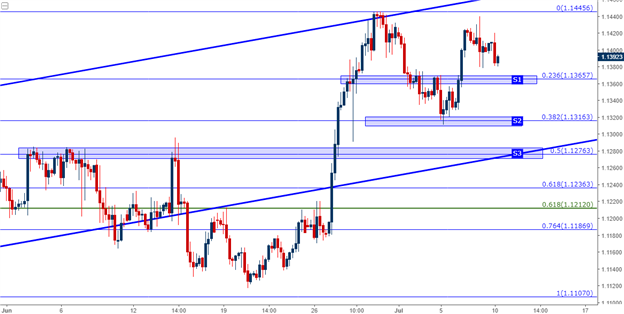