Stocks are Rebounding and Fresh Bear Flags are Forming

- After setting fresh lows yesterday morning, we’re seeing pullback in many global equity indices. The Bear Flags from last week were soundly broken, and it appears as though we’re seeing some fresh bear-flags form.

- China was closed this week and they re-open on Monday. Coincidentally the US is closed in observance of President’s Day on Monday. If the PBOC makes any moves to the Yuan, the repercussions could be violent in a low-liquidity environment. Be extra careful with weekend risk.

Most global indices are trading higher on the morning after a brutal week. And this was a brutal week to be sure, but outside of market moves, there wasn’t really much of note to take place. The most shocking piece of data actually came out well ahead of this week’s open when Chinese foreign reserves fell to their lowest level since May of 2012. But Chinese markets were closed this week in observance of Lunar New Year, so we didn’t even see the reaction from regulators in response to this drop, yet equity markets still pulled lower anyways. China re-opens on Monday, and it wouldn’t be out of the realms of possibility to see some action out of Chinese regulators next week in response to the most recent extension of the rout.

For now, stock prices are retracing higher after setting fresh lows yesterday. We had written about a similar scenario last week when many global indices were putting in bear flag formations. Those flags were broken really quickly and we’ve seen some outsized moves since then; and with this being a Friday after a heavy week of moves lower, it makes sense to expect some retracements as investors close up short positions.

The short-term flag on the S&P is shown below along with the previous two flag formations. I realize there is a lot going on in the chart, so if you want a better view, click on the image to get a better view. 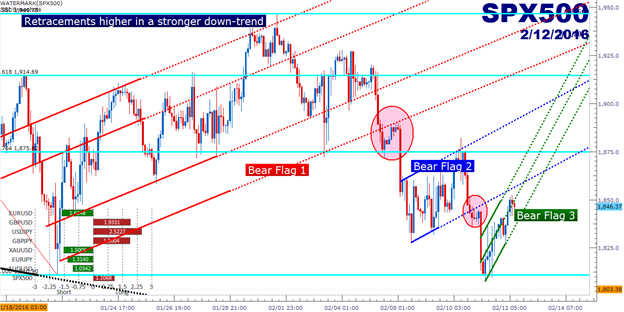 These retracements aren’t relegated to just the United States. We’re even seeing some retracement in Japanese stocks after another brutal week. Since the announcement of negative rates, the Nikkei is now down by -14.9% from the highs, and this is in just a little under two weeks.

We did get two hours and many hours of Janet Yellen’s testimony in front of Congress, but again, nothing really happened here. She hedged her statements fairly well and didn’t make any commitments to anything.

The one theme that did appear to transpire in response to Ms. Yellen’s Congressional performance was a continued hit to 2016 rate expectations. On Wednesday, she said that she didn’t rule out negative rates for the US economy although she mentioned the legality would need to be researched. She seemed slightly more open on the topic on Thursday in which she said she wasn’t taking ‘anything’ off of the table.

The big point of emphasis here is the continued divergence between the Fed’s dot plot matrix and market rate expectations. The Fed’s most recent dot plot matrix from December indicated four rate hikes for 2016. Markets, right now, aren’t expecting a rate hike at all in 2016 out of the United States and are actually giving higher probabilities for a rate cut than a rate hike.

It All Goes Back to the Debt

What will happen here? Nobody really knows. We’re literally in the process of making history in regards to monetary policy right now and this is why there is so much significant volatility. There’s no playbook, no comps and frankly the world has never seen what happens when the global economy shifts from zero interest rates to a rising-rate environment. A rising-rate environment is usually considered a drag on growth: If rates are going higher, then there are more opportunity costs for investors. Higher rates mean fewer reasons to take risks on speculative companies or investments, and this is why the act of kicking rates lower has traditionally been such a profound stimulus to stock prices. Because it’s a direct shift in an investor’s range of options: Lower rates mean more reasons to take on risky investments and fewer reasons to take on ‘safe’ investments; and given the backdrop of lower rates making it more comfortable for businesses to get loans, hire workers and expand, this usually brings about a synergistic effect. This is also why rate hikes are almost always gradual. It’s usually better for Central Bankers to err on the side of caution and to hike only when they know the economy can bear that shift in the investment landscape. This is how the housing bubble grew so quickly leading into 2008, rates were so low for so long after the Tech Bust that a home-buying bonanza developed…

But when rates get jerked down to zero, that investment environment becomes massively distorted. Now there are numerous reasons for investors to take on riskier investments, and this super-accommodative environment should allow for really strong growth given the backdrop available to corporates (cheap money, easy to expand and grow). This is what led to so much significant investment in areas like Oil and International Stocks. This is how China was able to borrow $14 Trillion (with a ‘T’) between 2007-2014, money was cheap and looking for any place to go.

And right now the world is at the point of realization as to what this created: Elevated asset prices with very little ‘real’ growth. And we’ve begun the unwind process after six years of ZIRP. The big question is whether doing more of the same will produce any different results, or whether this would just put even more air into those asset prices that will inevitably correct anyways.

A good example of what I’m referring to can be seen in high yield bonds, often called ‘junk’ bonds for their lower credit rating and riskier status. Traditionally junk bonds do well in growth-environments because of what we alluded to earlier; a more comfortable and amenable backdrop for the company to do business, while at the same time investors are being incentivized to take on more risk with such businesses. But when fear becomes an issue, investors will usually eschew the risk on such investments in favor of safety. This is often called a ‘flight to quality’ or more recently, ‘risk off.’ And in the chart below, looking at the ETF for ‘HYG,’ representing high yield bonds, we can see that exact theme taking place. 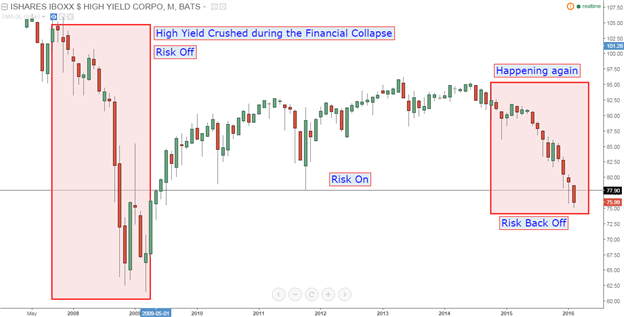 If the Fed wanted to take rate hikes off of the table they can easily say that, and Ms. Yellen had numerous opportunities to do so over the past two days. She didn’t. Further, the bank could’ve not moved in December if keeping stock prices stoked was what they wanted, and they hiked anyways. The same risks we’re battling today were here in December. We talked about these risks right after they hiked, and again in a three-part series to end last year in regards to Asia, Commodities and Rates. There is a very legitimate reason for the Fed to want to kick up interest rates, and numerous legitimate reasons for why the Fed might not ever want to go down the path of negative rates. If you have an aging population as the United States does with Baby Boomers continuing to age out of the workforce, interest rates are really important. That’s how these people survive, and this is a massive portion of the economy.

These types of investors can’t stay invested 100% in stocks, that’s just not reasonable because when we see the type of volatility that we’ve seen recently, their retirement nest egg will bounce around like a roulette ball. These folks need consistency, and that’s where Fixed Income plays a role. But debt markets are massively contorted right now after six years of Zero interest rates. With rates so low, these investors couldn’t allocate away from ‘riskier’ stock-market based investments. So they had to take on way more risk than they normally would to try to get any return in their portfolios.

And we’re not just talking about retirement accounts at brokerage houses worth more than $1MM; this is relevant for Social Security, Pension Funds, 401(k) and 403(b) accounts where investors don’t usually even know what they’re invested in. Low rates wreak havoc on these types of investment plans because they have a dearth of investment options. Investing in bonds in developed economies brings lackluster returns so they have to take on more risk than they usually would by buying corporate or international sovereign debt.

And further to that point – what happens to bonds in a rising rate environment? Prices go down. Just like a bear market in stocks, prices on bonds will usually move lower in a rising-rate environment. After all, if current rates on AA bonds are 4%, and your AA bond purchased three years ago has a 2% coupon, who in their right mind would buy that bond from you when they can get 4% for the same amount of risk? No rational investor would take the other side of that trade, so to incentivize them to do so; you’ll have to accept a ‘discount’ on your bond to get the total yield to ~4%. So that way, when the bond matures, the buyer has the increase in principal to go along with those lower coupon payments to roughly equal what they would’ve had if they’d just bought the new bond with the 4% coupon. This is why bonds are quoted by Yield and not price. Price would be a terrible relevant metric between bonds, like comparing apples to rutabaga. Yield equalizes.

So as investors, pensioners, retirees and near-retirees around the world attempt to plan for the next 10-20 years, they’re looking at a rising rate environment that will likely be unfriendly to any fixed income investments that are made today. Further to that point, this rising rate environment will likely be unkind to stocks as there are going to be increasing opportunity costs with each hike higher. This is like wearing a lead vest while trying to run in quick sand. This is what the world is facing right now, and the tools that have become customary over the past six years appear to be increasing risks, not offsetting them.

So, until something changes be prepared for continued volatility. This problem isn’t likely to just go away on its own, and there are some very big issues to contend with in the coming months and years.