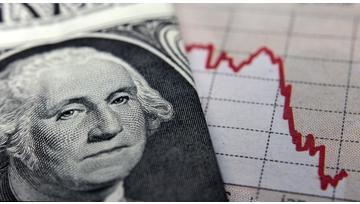 - Today marks the start of Q3 and tomorrow is a holiday in the United States, but we’ve already seen some big moves to start off the week. Wednesday brings meeting minutes from the Fed’s rate decision last month, and Friday brings Non-Farm Payrolls.

- The U.S. Dollar is starting the week off on a strong foot, but make no mistake, this year has been very rough for the Greenback so far. Meanwhile, trends in Euro and the Japanese yen have become quite attractive for a split-stance around USD.

The third quarter kicks off today and with the first half of 2017 now in the books, it’s already been quite the eventful year. While the reflation trade bubbled with hope as we turned into 2017, a vicious reversal in the U.S. Dollar through the first six months leaves many major currency pairs in rather precarious positions. The Euro has begun to show signs of strength as investors attempt to get-ahead of the European Central bank for an eventual exit from their gargantuan stimulus program; and more recently, we’ve started to see the British Pound take on some bullish tendencies as it appears that the Bank of England might be getting closer to an actual interest rate hike.

The Greenback will likely be the center of the FX Universe this week, as the two biggest items on the calendar are USD-related with Wednesday’s release of FOMC minutes and Friday’s print of Non-Farm Payrolls for the month of June. 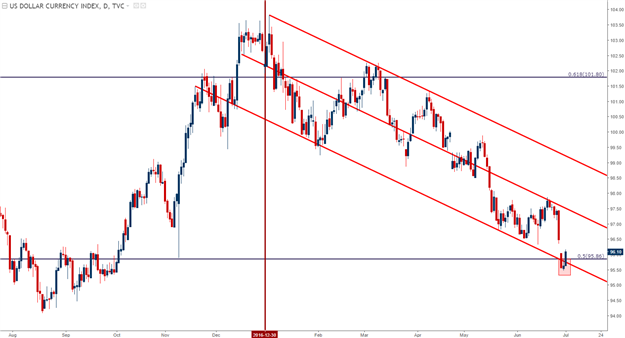 The U.S. Dollar just finished its worst quarter in seven years. Much of 2017 has seen the Greenback spiraling lower within a bearish channel, and near the end of last quarter – we saw the Dollar fall below a key support level of 95.86, which is the 50% marker of the 16-year move in DXY. Making matters more confusing for traders is the fact that the Federal Reserve has remained rather hawkish throughout 2017, as we’ve now seen three rate hikes in the past seven months and the Fed has said that they want four more out to the end of next year.

But trading FX isn’t about directly trading interest rates – it’s around expectations for changes in interest rates; and expectations for inflation and higher rates have been moving-up even-faster in Europe and the U.K., and this has left the Dollar offered for much of 2017, thus far. As we explained in last week’s fundamental forecast for USD, economic data has been slowing out of the U.S., and this has further helped to stomp the brakes for USD price action.

The big item of interest around the Dollar for this week is whether FOMC minutes and/or Non-Farm Payrolls can produce a move of strength, allowing traders to work-in to bearish positions under the premise of longer-term, bearish continuation. On the chart below, we’re looking at four potential areas to watch for resistance in the effort of bearish continuation in USD. 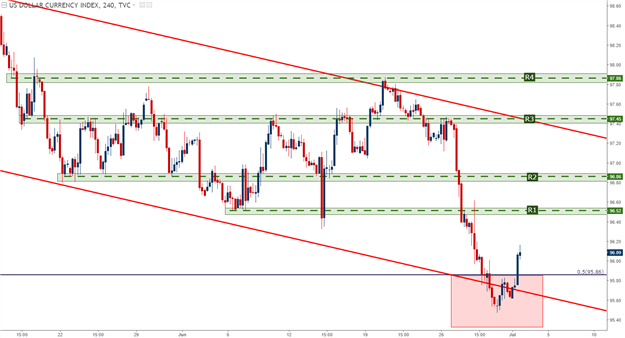 Probably one of the more surprising aspects of the first half of this year has been continued strength in Europe. While the first quarter of the year was populated with political worries around upcoming Dutch and then French elections, as those concerns abated in mid-April, bulls took over price action in the Euro. Perhaps more interesting is the way that bullish price action filtered into longer-term Euro charts, even with the ECB remaining relatively dovish at rate decisions in April and again in June. 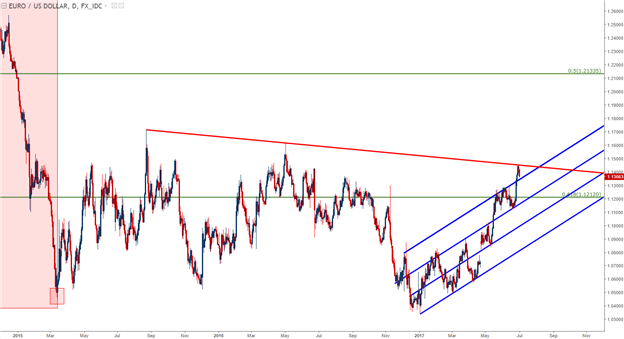 Last week appeared to produce a hastening in the move around some comments from Mario Draghi, and it appears as though Euro-strength will remain a go-to theme in the near-term. With this week being more USD-centric with zero high-impact Euro-zone data releases, the big item of interest is whether we can see a retracement in this recent bullish move in order to position-in to longer-term bullish entries. Last week saw price action in EUR/USD run-up to test a down-ward sloping trend-line on the weekly chart, and given the recent bullish structure in EUR/USD, there are three potential support areas that are attractive for longer-term bullish continuation entries.

IG Client sentiment remains elevated in EUR/USD at -3.23-to-1. Given retail sentiment’s contrarian nature, this is bullish for the pair. 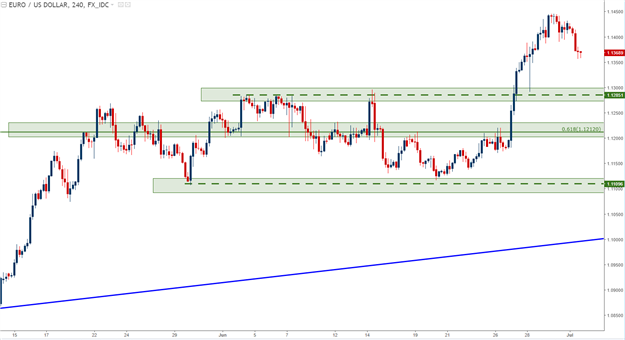 One of the few currencies that’s actually shown some element of weakness against the U.S. Dollar has been the Japanese Yen. This likely has to do with the fact that the BoJ will probably be one of the last major Central banks to move away from stimulus, and the Japanese economy will also probably be on the last major economies to reach their 2% inflation target. Meanwhile, inflation is near-target in Europe, well-above target in the U.K. and the Federal Reserve continues to hike rates in the U.S. This means that the Japanese Yen will likely remain as the favored ‘funding currency’ as long as risk aversion stays at bay. If we do see another bout of risk aversion in Q3 – we’ll probably see that filter through with some element of Yen strength, but outside of that scenario, traders will likely want to move-forward with a bearish bias on the Japanese Yen.

The week has started with an attractive move-up in USD/JPY, as prices have broken out of the big longer-term zone of support/resistance that runs from 111.61-112.40. With price action now working-up to fresh seven week highs, traders will likely want to let matters settle before looking to take on exposure. The area around 112.40 could be particularly attractive for ‘higher-low’ support for bullish continuation entries; and if the Dollar can retain somewhat of a bid throughout this week’s rather pertinent slate of USD-data, this is a position that could remain rather attractive. 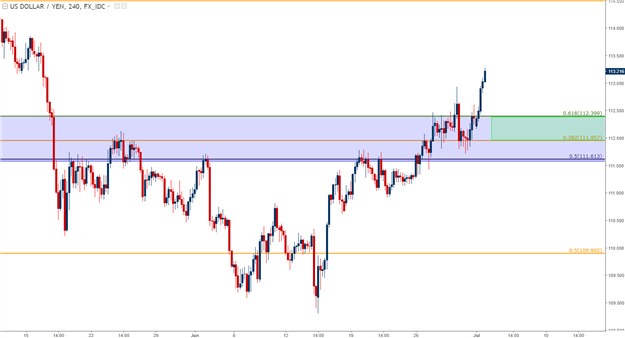