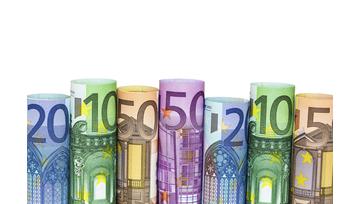 - U.S. Dollar weakness continues after yesterday’s release of FOMC minutes from the bank’s June rate decision – and tomorrow brings Non-Farm Payrolls, so we will likely see volatility in USD for the next ~24 hours.

- Euro strength continues as EUR/USD has posed a bullish break of a bull flag formation. An analyst pick was set for long EUR/USD yesterday and remains active.

In yesterday’s article we looked at what was a relatively strong U.S. Dollar after testing resistance at 96.52. Later in the day, meeting minutes from the Federal Reserve’s June rate hike were released; and while there was little that was directly telling, the net takeaway was one of Dollar weakness. The Fed appears rather divided on the topic of balance sheet reduction and, once again, markets walked away scant on details of how the Fed might embark on whittling down the $4.5 Trillion portfolio sitting on their balance sheet. One interesting topic contained within those meeting minutes was the fact that the multiple Fed members appear to be growing concerned that loose monetary policy may be posing risks to the financial system. While the timing of such a concern may feel rather odd for a bank that sat on near-zero rates for seven-plus years, the fact that the Fed has this on the radar could bring even more persistence around future rate hikes. This also means that the Fed may be even more willing to overlook ‘transitory’ or, as we heard yesterday ‘idiosyncratic factors’ that cause inflation to print below the banks 2% target while continuing to hike rates.

The reaction in the Greenback was quite interesting around yesterday’s FOMC minutes. While the initial move was rather muted, follow-thru price action has been quite telling. In yesterday’s article, we looked at four potential resistance levels in the U.S. Dollar via ‘DXY’. Price had just tested the ‘R1’ level that we were looking at, and as we advised, traders would likely want to wait for short-term support to break at 96.33 before looking to press the weak-USD continuation trade. DXY slid below this support just ahead of the minutes release, and then resisted there a few hours later before breaking-down again. On the hourly chart below, we’re including the levels from yesterday with emphasis on potential support levels for the days ahead. 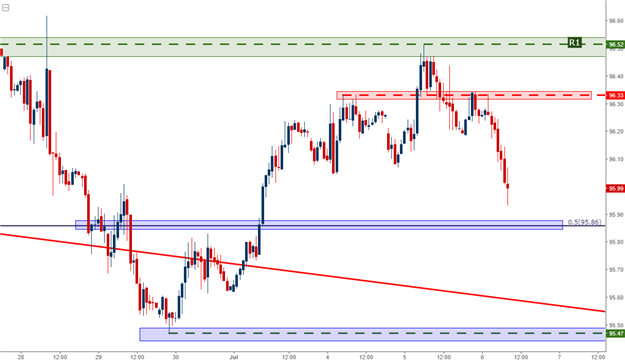 Tomorrow brings the big data release with Non-Farm Payrolls, so we will likely see the Dollar volatile for at least the next 24 hours. The bigger question is whether NFP can bring anything strong enough to turn this tide of USD-weakness, as this trend has become rather pronounced; and this likely has as much if not more to do with Europe than it does the United States.

This recent wave of USD-weakness really got started after this morning’s Euro open, and along with this move was another burst-higher in the Euro while European yields continued to rise. As we discussed yesterday, the move in EUR/USD around yesterday’s FOMC minutes would be telling for near-term price action in the pair. After a visit to support at the 38.2% retracement of the most recent major move, strength returned in EUR/USD to drive price action above a bull-flag formation that’s populated on the chart. On the hourly chart below, we’re looking at this move as Euro strength has continued: 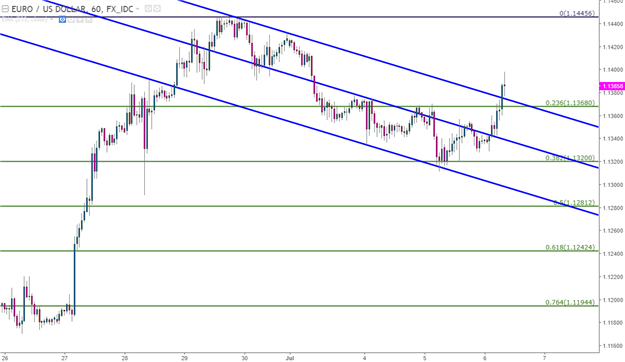 For those looking at bullish approaches, support at 1.1368 is particularly interesting, as this is the 23.6% Fibonacci retracement that had previously helped to carve-out short-term resistance. If today’s price action is able to find support around this zone, topside re-entry could be attractive under the motivation of trend continuation. 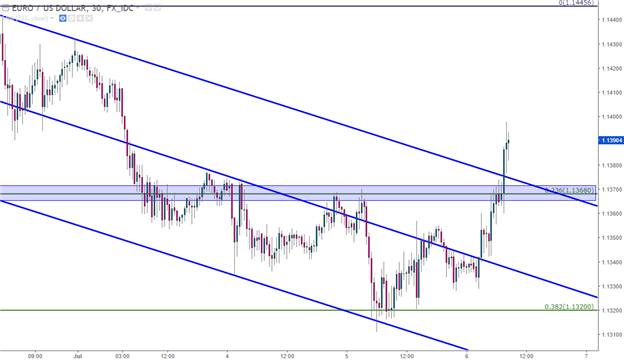