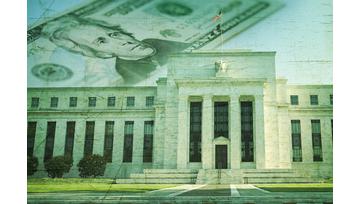 Dollar Drifts to Resistance Ahead of FOMC Minutes, NFP

- Today brings the release of meeting minutes from the Federal Reserve’s rate hike in June, and Friday brings Non-Farm Payrolls for the month of June. The Dollar has rallied to open the week, but will these drivers bring more strength to the Greenback?

- With the pullback in EUR/USD, IG Client Sentiment has tapered-down to -2.45-to-1, as of this writing. Given retail sentiment’s contrarian nature, this is bullish for the currency pair.

The U.S. returns from holiday today, and markets get re-started on a rather quick foot as later this afternoon brings the release of FOMC meeting minutes from the bank’s rate decision in June. This can be a very pertinent driver as there are some details that markets may be looking for, primarily on the front of balance sheet reduction and how that may go along with the Fed’s rate hike plans to the end of 2018.

After that hike in June, the Dollar found support and moved-higher for about two weeks. Then – last week saw an entourage of Central Bankers from some of the largest economies offer comments that created another deluge in USD price action. Much of the bearish move was Euro-related, as the single currency popped-higher after Mario Draghi’s comments were construed in a very hawkish light. Perhaps more interesting is that the day after Draghi’s comments, and ‘unnamed ECB source’ said that those remarks were ‘misjudged’ as they were meant to be more balanced in nature. Markets didn’t care, and the bullish run in the Euro and the bearish drive in the Greenback continued. This is fairly clear evidence of a market attempting to front-run a widely-expected action (ECB stimulus exit).

On Monday, we looked at four resistance levels on DXY in the effort of bearish continuation. As we near the release of those meeting minutes later this afternoon, price action has begun to find resistance at the ‘r1’ level that we looked at to open the week.

Short-Term Resistance in the U.S. Dollar, via ‘DXY’: Four-hour Chart 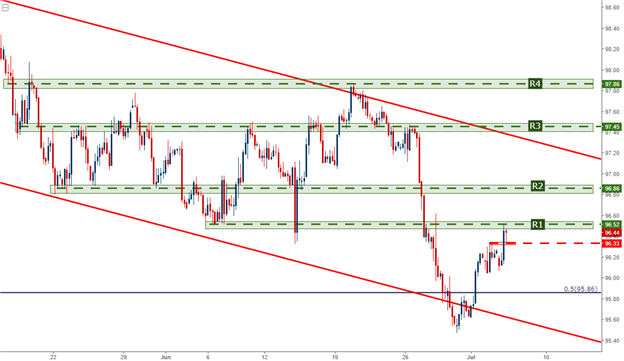 If we move down to a shorter-term hourly chart, we can focus-in on this week’s bullish move, and it appears that there could be some deeper continuation into the ‘r2’ zone looked at above. After prices ran into resistance earlier this morning, buyers jumped-in to support around prior resistance of 96.33. If price action breaks-below this level, then bearish continuation can become attractive again. But as long as this level holds, traders will likely want to wait for prices to test the zone around the 96.86 level. 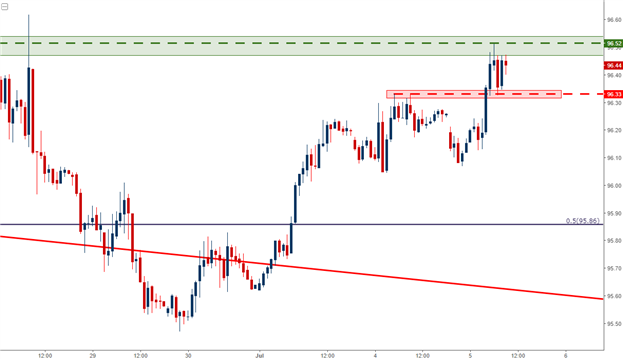 While the Dollar has been dropping, the Euro has been running, and this has been rather pronounced throughout the first half of this year. The European Central Bank enacted another round of stimulus in December of last year, and EUR/USD set a low just a few weeks later. But after bottoming-out on the second trading day of 2017, price action has been very bullish in nature, trading within an upward-sloping channel as prices have jumped-higher by more than 1,000 pips.

As we mentioned earlier, this appears to be markets attempting to front-run stimulus exit from the European Central Bank, and as growth an inflation data throughout the bloc remain solid, those bets for tighter policy have continued to increase and may continue to do so until something changes. 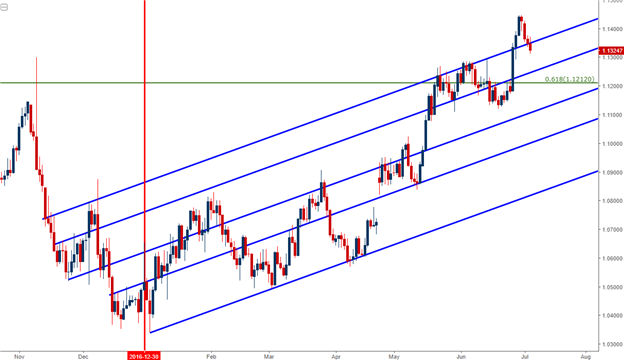 Last week’s outsized move in the Euro brought upon a bullish break of the already bullish channel, and events such as this can highlight a market that is overbought. Since that plummet in the Dollar on Thursday of last week, EUR/USD prices have edged-lower as we’ve retraced approximately 38.2% of that most recent bullish run.

Just a bit-lower, around the 50% retracement of that same move we have a confluent level around 1.1280, as this had previously helped to set the highs in EUR/USD around the ECB’s rate decision in June. A support test here can open the door to bullish re-entry with stops applied below the longer-term level of 1.1212. 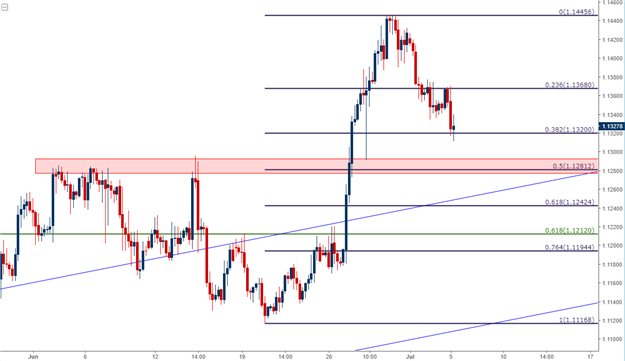 USD/JPY continues to run to fresh seven-week highs, and while the Dollar was offered-lower against most major currencies last week, the bullish move in USD/JPY remained intact. This highlights the fact that while growth and inflation numbers appear to be moving-higher across the globe, inflation continues to lag in Japan and the BoJ will likely be one of the last major Central Banks to face a ‘taper dilemma’. And without the threat of rate hikes or tighter policy from the Bank of Japan, the Yen can remain one of the favored ‘funding currencies’ for carry trades around the globe.

USD/JPY has posed a top-side break of a key resistance zone that runs from 111.61-112.40, and prices remain near seven-week highs. On the four-hour chart below, we’re looking at three potential support levels that can be incorporated for bullish continuation strategies should FOMC Minutes and/or NFP Produce weakness in USD. If prices in USD/JPY break-below the prior support area around 111.13, traders would likely want to abandon the bullish approach. 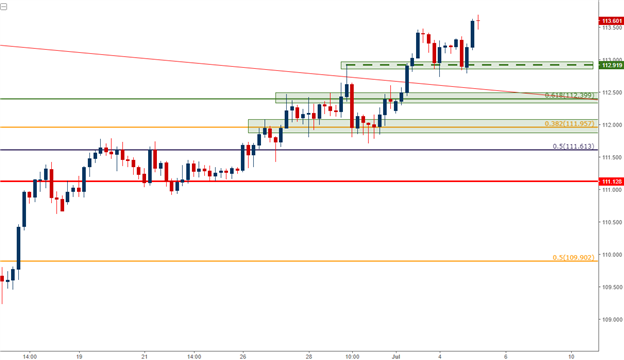