Trump Speech to Highlight a Busy Week for Markets

- This week’s economic calendar is loaded; but the headline of the week will likely be the Speech from President Donald Trump to both houses of Congress, held on Tuesday night.

- Despite the continued run in stock prices, bonds are not indicating that all is well with the ‘reflation trade.’ The U.S. Dollar remains relatively-weak despite the Fed’s increase in hawkishness. Below, we look at three of the more pertinent market themes for traders to follow this week.

Last week’s economic calendar was relatively light, but that didn’t keep key markets like the U.S. Dollar from putting in some interesting moves, all the while stocks continued to run up to even higher all-time highs. And while the feel-good euphoria appears to be setting in throughout many pockets of the equity market, this week’s calendar picks up considerably – with one huge event that will likely denominate everything else on the docket; and that’s President Trump’s speech to both houses of Congress, set for Tuesday evening.

The rest of this week’s calendar remains robust with high-impact announcements on each day. One notable exception is the lack of Non-Farm Payrolls; normally held on the first Friday of every month. Non-Farm Payrolls for February will be released the following Friday, March the 10th, and this is probably a good thing considering how loaded this week’s calendar is. Below we look at just the high-impact announcements (please click here for the full, sortable economic calendar), and below that, we look at three of the more interesting themes to be answered by this week’s data: 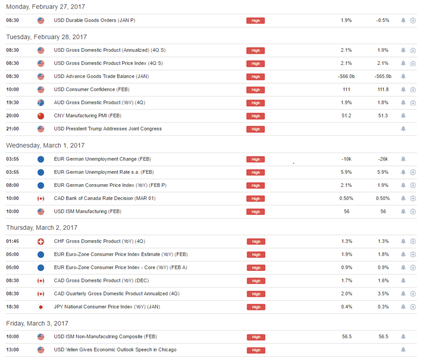 The past two weeks have seen some slightly-hawkish clues from the Fed; first with Chair Yellen’s Humphrey-Hawkins testimony and then again last week with the release of the Fed minutes. When the Fed hiked rates in December, they said that they were looking at a full three rate hikes in 2017. Markets never really ‘bought’ that idea, though, and as we’ve worked deeper into the New Year, the combination of commentary from the Trump administration combined with the recent historical patterns of a very passive Fed have kept equity markets flying high while the U.S. Dollar has been unable to continue that brisk up-trend that started on the night of the election.

Stock Prices – Vulnerable on the Road to Infinity and Beyond?

U.S. Equities have become the honey badger. Regardless of the risk factors that appear to be showing in the backdrop, or the Federal Reserve threatening near-term interest rate hikes, equity prices just continue marching-higher, not caring about downside or detriment. Sure, valuations are still expensive. But just as we saw in 1999, valuations can get even more stretched as excitement drives traders’ behavior. The excitement in this most recent iteration of gains appears to emanate from the one-two combo of a passive Fed and the hopes for fiscal stimulus (tax cuts). But the Fed has been trying to transmit more-hawkishness to markets; that much has been obvious, and betting on robust fiscal policy expansion just yet may prove a bit aggressive.

Regardless, we’ll likely see this theme come to light during President Trump’s speech. If the President prioritizes and places emphasis on tax cuts and removal of regulations, equities could get another shot-in-the-arm. However, if the focus is on immigration, trade policy and border control, we may see a bit of softness in equities. This doesn’t mean a full-on reversal, but given the feel-good euphoria that’s driven equity prices to even higher all-time-highs, any change in the backdrop could produce a pullback.

To read more about this theme, please check out Paul Robinsons weekly forecast for Equities entitled, S&P 500, DAX & FTSE 100 Could be Under Pressure This Coming Week.

Are directional changes in store for Euro, Yen?

While the above two US-centric themes carry global connotations, they certainly aren’t the only market items of importance for the week ahead. We get a series of European data points that could further contribute to a top-side move in the Euro, and this is an area where we’re beginning to see pre-election jitters begin to show ahead of what’s looking to be a critical election-cycle in France; and in Japan we’re going to see the release of a very important inflationary print. Below, we take a look at USD/JPY working with a very interesting long-term zone of support, and if you’d like to read more on either of these themes, please click on the relevant link below for the DailyFX Trading Forecast for that specific market.

To read more about Yen please navigate to the weekly forecast entitled, Kuroda Stokes Bullish Motivation in the Yen; CPI on deck.