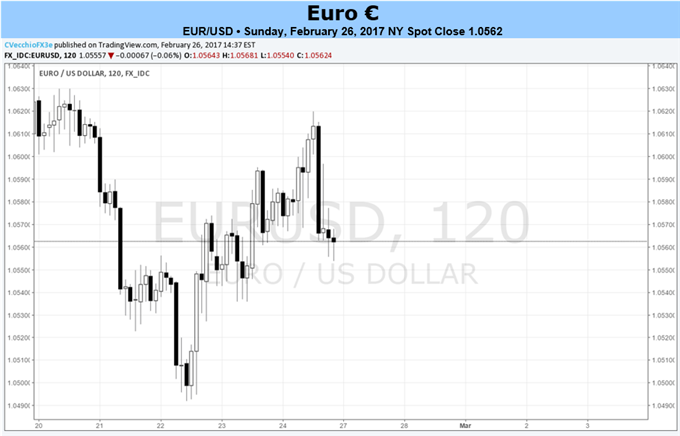 - Euro under pressure across the board last week as odds of a Marine Le Pen victory during the French elections seem to be creeping higher: Brexit/Trump 2.0 for markets?

- Positioning in EUR/USD and EUR/JPY are now net-long, a contrarian signal for further losses in the pairs.

The Euro slipped against all of its major counterparts last week, a sign that political risks are creeping in on the single currency just months out from a series of crucial elections. With Dutch elections in March and the French elections in April and May, it seems market participants, recently burned by the dual surprises of the June Brexit vote and Donald Trump’s November victory, are not being so quick to dismiss the risks that the wave of right-wing populism poses to financial markets this time around.

While EUR/USD only fell by -0.50% by the week’s close, it had briefly dipped under 1.0500 amid signs that the National Front’s Marine Le Pen was becoming a legitimate force be reckoned with. Yet after François Bayrou, the centrist who was widely considered the fourth man and spoiler in the French presidential elections, stepped down while throwing his support behind Emmanuel Macron, the independent who currently (according to polls) has the best shot to stave off Le Pen, the Euro found some relief, rallying back through 1.0600 briefly by Friday.

The easiest place to spot the growing concern over the French election would be in French OAT yields, particularly how they’ve traded relative to German Bunds over the past month. The 10-year French-German yield spread closed this past week at 74.2-bps, up from 56.9-bps one-month earlier. As a proxy for rising political risk in the Euro-Zone more broadly, the 2-year US-German yield spread closed at 2.089% on Friday, up from 1.886% on January 27.

While some may be inclined to think that speculation over the timing of the Fed’s next rate hike may be influencing EUR/USD, there has been little movement in the expectations curve in recent weeks: there is still less than a 40% chance of a March rate hike, per the Fed funds futures contract. Similarly, it’s not as if Euro-Zone data has been disappointing either: the Euro-Zone Citi Economic Surprise Index finished at +70.2 on Friday, a sharp turn higher from +41.5 on February 17.

In the days ahead, a few upcoming data releases are likely to catch traders’ collective attention and drive the Euro. The second reading of Q4’16 French GDP, due out on Tuesday, could be fodder for the elections. Perhaps more directly related to policy, preliminary February German inflation and Euro-Zone inflation data, due out on Wednesday and Thursday respectively, may serve to cushion the Euro. Signs that inflation is returning to the region’s largest economy (and the region more broadly) may serve as support for the idea that the European Central Bank won’t loosen its policy further at said time.

As time presses on through March, it seems predetermined that markets will be under the greater influence of headlines pertaining to the French election. That’s not to say that economic data releases and activity by the ECB won’t matter; they will just be taking a backseat.