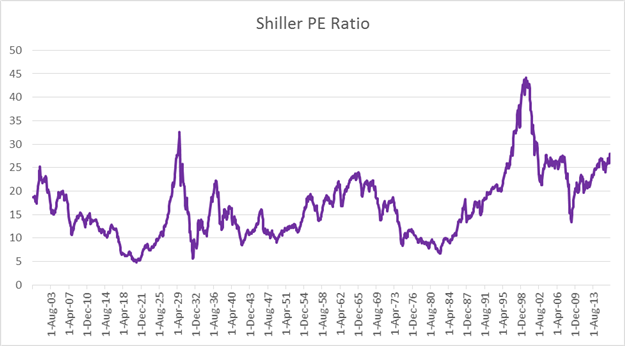 - As euphoria has swept global markets after U.S. elections, prices have run very far, very fast. And while many are debating whether stocks are ‘expensive’ here, data indicates that U.S. stocks are at historically-elevated levels.

- Being overbought is not a bearish thesis; this is merely reason to pause on bullish-continuation, especially whilst at highs. But the thesis could become bearish very quickly, especially if the Federal Reserve can’t contain risk aversion with dovish commentary or inference in the future, as they have in the post-Financial Collapse environment.

As we head into the New Year with excitement enveloping the economic world, many investors have begun to ask the dreaded question as to whether stocks are ‘overpriced.’ Meanwhile, many others are cheering the excitement of a new regime in Washington that may bring business-friendly, growth-positive initiatives into the biggest economy on Earth; and this is leading to some uber-ebullient forecasts when looking at stock returns next year. So – what is an investor to do? Should they lose their better sense and just buy based on the excitement of the unknown? Or should they take profits while markets are riding highs, looking to diversify out of high-flying markets into a more-balanced portfolio?

At the center of this question is something that we heard Chair Yellen address last week, and that’s whether or not stock prices are ‘expensive.’ When Ms. Yellen was asked this questions, she responded that she didn’t feel that stocks were over-priced when considering the context of the current economic environment (low rates). And while it’s reassuring to hear the head of the Federal Reserve say that stocks aren’t expensive, we’ve been down this road before in the very recent past – both when Ben Bernanke said that there was no bubble in the housing market in 2005 and when Alan Greenspan said he didn’t see a bubble in tech stocks just before the implosion in the year 2000. So while these types of assurances may be ‘nice,’ it doesn’t necessarily mean much.

But putting some data behind the question presents a far different picture. Valuing an index is more challenging than an individual company because we have to find a way to homogenize earnings across some very different corporate landscapes. For instance, and apples-to-apples comparison between a company like Facebook and U.S. Steel could be pretty challenging from a financial metric point of view. Sure, both companies have earnings and revenue; but each has a far different set of circumstances to drive each of those figures.

Shiller PE aims to address those issues by using inflation-adjusted 10-year average earnings for companies. By using 10-year averages and adjusting for inflation using CPI, earnings comparisons can be normalized across companies in the effort of making a more valid apples-to-apples comparison amongst various sectors and industries. This is also how we can compare broad-based market valuation metrics, like that of the S&P 500.

At first glance, this chart probably doesn’t mean a whole lot to you. This is just a valuation-ratio. But on the chart below, we’ve added a few historical events that have taken place each time we’ve moved into this area of historical Shiller PE ratios. 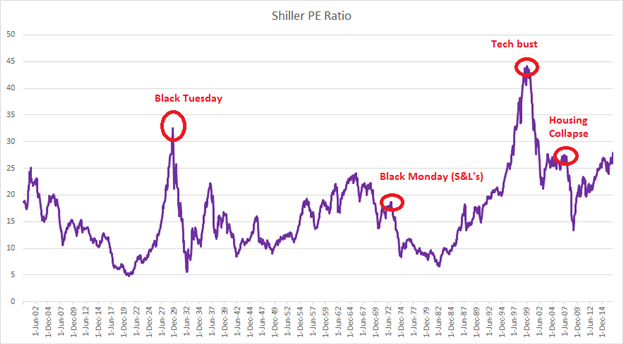 The part of this chart that should catch your attention is on the right side, and the fact that we’ve moved back-up to the level that we were at just-ahead of the housing collapse in the United States; with Shiller PE approaching the level of ’30.’ There have only been two other historical instances since 1900 when Shiller PE moved over 30 – and neither turned out well; as this took place just before ‘Black Tuesday’ signaled the start of the Great Depression, and when tech stocks went bonkers in 1999, just before the tech ‘boom’ turned into the tech ‘bust.’

On the chart below, we take an even-closer look at Shiller PE ratios since 1993. 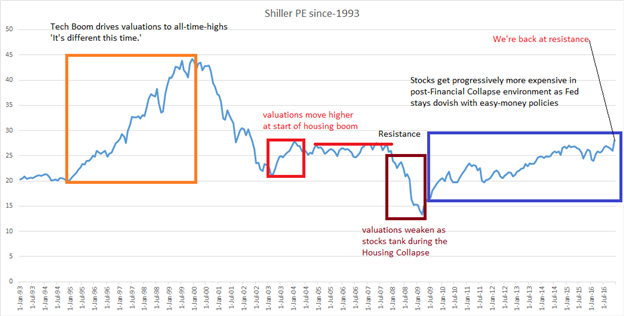 Since Stocks Are Expensive; Does That Mean that They’ll Go Down?

Not necessarily. Just as we saw in 1996 leading into 1999, stocks can get more expensive and as John Maynard Keynes himself had said, markets can stay irrational far longer than you or I can remain solvent. So – stocks being at historically expensive levels is not, in and of itself, enough to support a bearish thesis. For that – we need drivers, and we may have such a driver on the horizon as we move into 2017; although we don’t have a significant amount of clarity on the topic at the moment.

What is it that’s kept stock prices elevated since the Financial Collapse, thereby helping to produce these historically-elevated PE ratios? This is also the same thing that Chair Yellen had mentioned when asked about equity valuations at last week’s Fed meeting; and what we’re referring to here are interest rates.

This is what has helped to produce such expensive valuations on U.S. stocks, as each pullback in equities over the past few years has been countered with more dovish Fed commentary. This is what we saw around the Taper Tantrum in 2014, then again when China began to implode in 2015, and then again at the beginning of this year just after the Fed posed their first rate hike in over nine years. Each time, when equities began to stumble, Fed comments made their way into markets to help restore order and strength to U.S. issues.

But now that euphoria is engulfing global risk markets, we may not have that same sense of security should equity prices stutter-step in 2017. And we know for a fact that the Fed wants to use this more-positive backdrop to hike rates even-faster, just as we heard last week. And there are still many persistent global economic issues in which the U.S. economy does carry exposure; namely China and their dwindling FX reserves.

Combine this with the fact that we’re likely at least a year before we see any type of fiscal stimulus actually driven into the U.S. economy (bill must be drawn up, approved by Congress, etc.), and we could be nearing a type of vacuum in which the push point of yesterday’s markets no longer exist to support the fundamentals of today; all while we’re waiting for the excitement of tomorrow to actually show-up.

What is an Investor to Do?

Again, stocks being expensive and at elevated levels is not in-and-of-itself a bearish-thesis. This is, however, perhaps compelling enough to second-guess chasing those fresh highs as markets are bursting-higher with euphoria. For investors that do want to play a continuation of the ‘Trump Trade,’ perhaps short-Yen, or maybe even short-Gold could be attractive ideas to fill-in instead.

For investors or traders that do want to play a short-thesis on U.S. stocks, they’d likely want to wait for resistance to show-up first, at which point they can watch price action on a shorter-term chart in the effort of playing a bearish near-term break.