In last week’s forecast, we expressed our concern that risk was rising for the indices, but that the trend still remained upward until we saw a break in the bullish price action. As the week concluded we saw cracks in the lining begin to develop.

Next week we have a few ‘high’ impact data points which could bring volatility, but as typically the case the brunt of impact may be most felt in the FX/rates space, not in the indices. With that said, however, we need to be mindful when managing risk around these events.

Looking to the most important scheduled economic events in the U.S., we start the week off on Monday with Durable Goods Orders at 13:30 GMT; Tuesday holds Q4 GDP at 13:30 as well as Advance Goods Trade Balance, followed by Consumer Confidence at 15:00; Wednesday brings Core Personal Consumption Expenditure at 13:30, then ISM Manufacturing at 15:00; and to end the week ISM Services/Non-manufacturing at 15:00, followed by Yellen speaking in Chicago at 18:00.

Looking to the techs, the S&P finally showed some weakness at the end of the week after a torrid run for most of February. Volatility has been compressed for several months and likely due for a pop sooner rather than later; March can be a volatile month. The first area of support to watch on weakness is the February trend-line. How the market responds to support should it start dropping will provide insight into whether a healthy pullback is all we will see, or if something more sinister is kicking off. 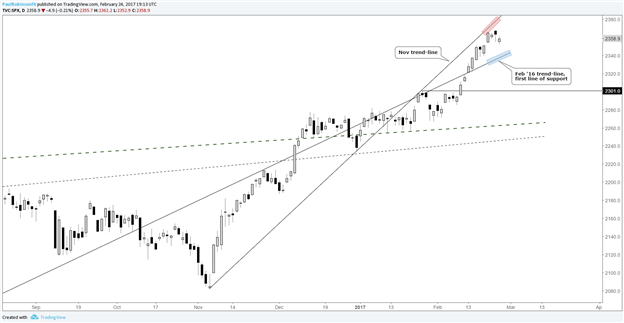 Key Eurozone and German data on the docket begins with Eurozone CPI at 10:00 GMT on Tuesday; German employment data on Wednesday at 8:55, and later in the day German CPI at 13:00; Friday we will get a look at Italian GDP for Q4 at 9:00, but not likely to have much impact on German equities.

Moving on to the chart: The DAX broke hard on Friday, shedding 1.2%, just a couple of days after touching off a confluence of top-side trend-lines. The break lower held at the December trend-line, managing to put in the day’s low just beneath it. The index will need to respond shortly to support or else we will have to start looking for more selling towards the next area of significant support in the 11400/500 vicinity. 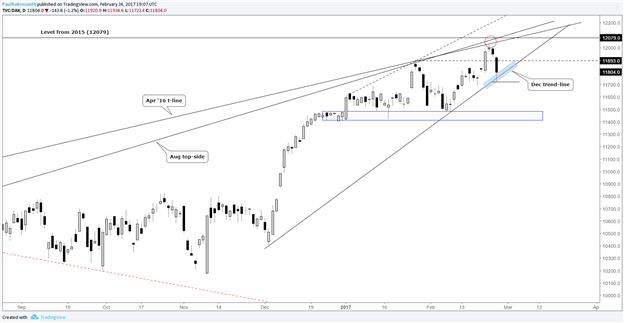 The UK isn’t set to release any ‘high’ impact data this coming week, but there are a few minor data points to watch out for – see the economic calendar for details.

Technically speaking, the FTSE began rolling over a few days prior to the other indices, and took a hard spill for much of Friday before an afternoon rebound. Should we continue to see last week’s beginnings of ‘risk-off’ continue we will look to the Friday low at 7192 first, then the June trend-line(s) and prior record highs near 7100 as support. On the top-side, some work will need to be done in order to restore good technical posturing. Keep an eye on sterling, the correlation between GBPUSD and the FTSE sits at -65% on a 21-day basis. A sharp move in the currency could very well have an impact on how the 100 trades. 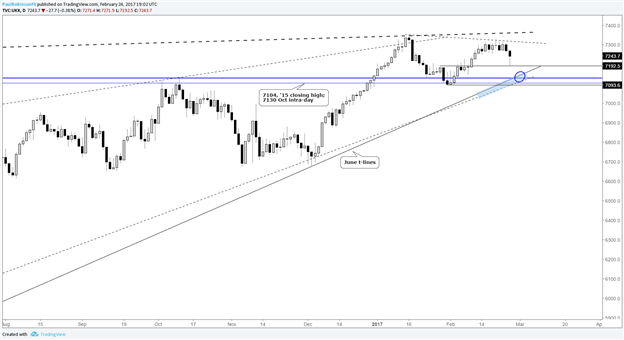