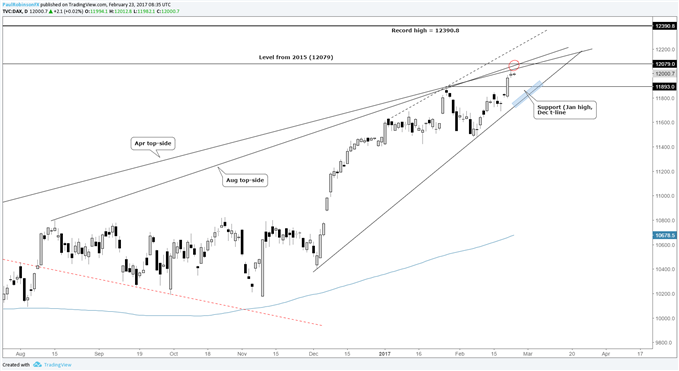 DAX: Resistance Looms, but Support Not Far Below

The DAX ‘keeps on keeping’, testing levels we’ve been taking note of running as far back as 2015; where several swing highs were created on the decline from record highs. Thus far, the market continues to surpass those levels, with the first one nearly 600 handles lower. The trend for several months has been higher, and now the German index looks as though it could at some point join the UK and US in notching out new record highs this year; 12391 is the level to surpass.

If it is to do so, though, it still has a few more levels and lines to peel through before doing so; the top-side trend-line extending back to April, another off the August peak, and then another 2015 swing high arriving at 12079. Those three levels come together in close proximity. This might be where we see a break in the action and a potential spot to look for the market to pull back. On any weakness, if the DAX is to keep the trend since November intact, a decline should hold around either the Jan high of 11893 or the trend-line not far below.

Should the DAX blow through the trio of resistance, then we will look to another shorter-term top-side trend-line off the Jan 4 high as the last line of resistance before the old record high can be achieved.

Looking a little further out in time and using our imagination a bit, there is an alternate path which could unfold, but will require some time before coming to fruition. Given the converging top-side trend-line and rising December trend-line, a rising wedge may eventually carve itself out. From where that takes us, we’ll worry about that should the pattern come into view. For now, it's just food for thought.