Financial markets may overlook ample top-tier economic data and a steady stream of central bank commentary as a pivotal speech from US President Donald Trump takes the spotlight.

US Dollar Forecast: US Dollar May Struggle as Trump Speech Overshadows Hawkish Fed

The US Dollar may struggle in the week ahead as doubts about the impact of still-uncertain fiscal policy overshadow hawkish pronouncements from Federal Reserve officials.

The Euro has shown increased sensitivity to French-German yield spreads, suggesting that traders are becoming more fixated on the upcoming French elections.

One of the biggest beneficiaries of the ‘Trump Bump’ across global markets was Japan. After the BoJ spent more than three years weakening the Yen as part of ‘Abe-nomics. ’

The broader outlook for the British Pound remains tilted to the downside with the U.K. on course to trigger Article 50 in March.

The Australian Dollar may gain if fourth-quarter GDP data confirm that the Lucky Country has avoided recession for yet another year. It is very likely that they will.

The Canadian Dollar was pressured for most of last week, but an unexpected rise in inflation pressures by the end of the week helped stabilize the Loonie. Eyes will be on energy prices and US President Donald Trump’s State of the Union address in the coming days.

Looking forward, there are a bunch of events dotted on both China’s and the U.S’ economic calendar, which could add some volatility to Dollar/Yuan rates.

The rally in gold prices continued this week with the precious metal up 1.7% to trade at 1255 ahead of the New York close on Friday.

Equities Forecast: S&P 500, DAX & FTSE 100 Could Be Under Pressure This Coming Week

In last week’s forecast, we expressed our concern that risk was rising for the indices, but that the trend still remained upward until we saw a break in the bullish price action.

The Oil market finds itself in a unique spot of the commodity landscape of Q117. Two of the largest global suppliers, the United States Shale Oil Producers and the Organization of Petroleum Exporting Countries (OPEC) are trending in different directions while the price seems to have stalled near the 2017 Opening Range high. 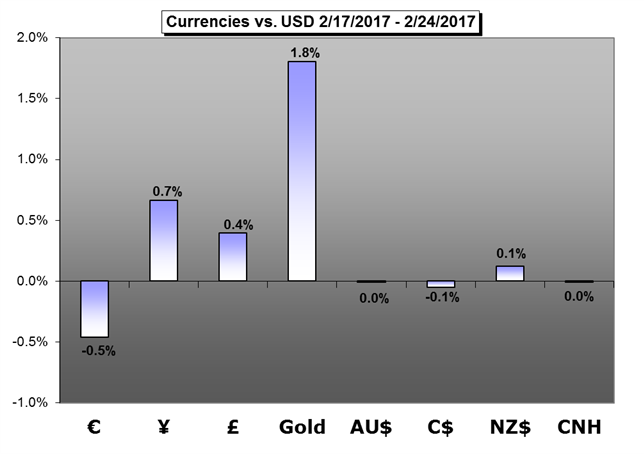