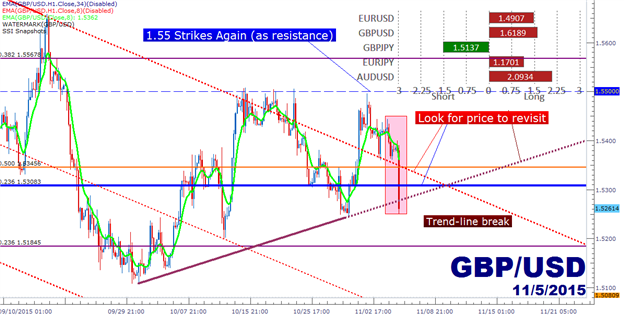 1. One of the few economies that looked primed for a rate hike within the next couple of years is now looking at ‘looser for longer.’ This morning marked the Bank of England’s Super Thursday, in which we received a rate decision, meeting minutes and the Quarterly Inflation Report. And for much of the year, the Bank has pointed towards the end of the year for the picture of rate hikes ‘to come in sharper focus.’

This morning, the Bank of England took a cautious stance as they lowered their inflation forecasts going out to the end of 2016. The bank is now looking for inflation to stay below one percent until the second half of next year, and they also noted the potential for downside risks in their outlook (namely continued slowdown in Commodity prices and the fear of a meltdown in Asian economies). They also mentioned that a stronger British Pound will likely continue to subdue inflation, with the expectation that this impact will slowly dissipate in the future.

The rate decision for this meeting was, again, an 8-1 vote with the sole dissenter being Ian McCafferty voting for a rate hike. Christopher Vecchio had written a more full-fledged write-up on Super Thursday, so if you want to get more depth behind the details, check out the article ‘GBP/USD Slides as BoE Cuts Forecasts, Keeps ZIRP Policies in Place.’

More interesting has been price action in the Cable this morning, as this dovish BoE report sent the Sterling lower against most major currencies. The short-setup mentioned in this week’s GBP/USD Technical Report has already met its first two targets, with open limits remaining at 1.5184 and then 1.5000. And perhaps more-to-the-point for those that don’t yet have a short position in GBP/USD, the trend-line connecting the October lows to the 10/29 swing has just given way after price had broken below the pivotal 1.5308 Fibonacci level. Traders looking to open short positions in GBP/USD can look for price to revisit these previously supportive levels as new resistance. This is a price action tell that may offer trend-side entries over the next couple of days.

2. USD-Strength is back: The Greenback looks poised to set a new intermediate-term high at 12,110. This high came in shortly after a hawkish-FOMC pointed towards a quicker-than-expected rate-hike for markets. As we mentioned on Monday of this week, traders could look to buy a ‘higher-low,’ after the US Dollar pulled back after those new highs were printed.

The fundamental perspective on this makes logical sense: With the Bank of England pulling back on the rate hike picture (or at least appearing to do so), the United States is one of the lone developed economies actually considering a rate hike at some point in the near-future. This could lead to continued USD-strength until it becomes obvious that a December rate hike isn’t happening.

In Yellen’s congressional testimony this week, she struck a largely dovish-tone, but was sure to keep options open towards a December hike, and this has accelerated this USD-strength over the past three days. We’ve now re-broken the top-side of the longer-running symmetrical wedge, and after near-term resistance clears at 12,110, the next obvious target becomes 12,162 – which is the 12-year high on the FXCM Dow Jones US Dollar Index. 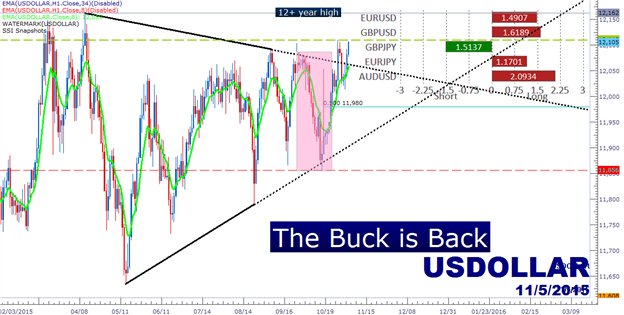 3. How to institute these themes to use the FX-market to your advantage: One of the few universal factors in this world is that the better you are at something, the more that flexibility can help you out. The FX market is no different, at least in my opinion, as the additional flexibility can open up a whole range of options for how you want to go about instituting your trading plan.

Right now, we have a pretty fantastic opportunity to play some of these monetary policy dichotomies that we constantly discuss in these market talk emails. As in, if we trade stocks or futures, that’s, in essence, a one-sided market: You either buy or you sell them. And they go up or go down, and you get a profit or loss. But you really only have one decision – do you want to buy or do you want to sell?

In FX – you get to decide how you want to do it. As in, if you want to sell GBP, you don’t have to do it against the dollar or the yen or anything else that you don’t want to be exposed to. And with Central Banks around the world taking on differentiated stances towards near-term economic stimuli, traders can jump on these themes.

We’ve just seen the BoE taking a dovish stance after traders had been pricing-in the first rate hike in over seven years, and as these rate-hike expectations continue to get priced-out of the market, traders can look to sell GBP against currencies that they feel will strengthen. As we looked at with point #2 above, USD is strengthening on the prospect of a quicker-than-expected rate hike. So, the fundamental direction of both of these economies appears to be in the same direction, at least for now, and this can offer opportunity to the trader.

But these themes can be extrapolated elsewhere in the FX market, as we had outlined in Two Ways to Trade the Euro and the Dollar. The European Central Bank has already taken a decidedly-dovish tone in announcing that they would re-examine QE at their December meeting, and this can, yet again, offer opportunity to the trader. They can look to marry up a weak Euro with a perceived strong currency of their choice, and look to play the continued divergence between Europe and whatever economy they wanted to match the position up with.

One of the markets that we’ve been focusing on of recent has been EUR/JPY, as the Bank of Japan recently took a step back from hopes of additional intervention. We had seen Yen weakness going into the October BOJ announcement under the premise that we may get an increase or extension of the program; and when we didn’t, this opened the door for some of those intervention-hopes to get priced out of the market with Yen-strength.

On the chart below, we’re looking at the current setup in EUR/JPY; and if you’d like to get a more technical explanation on near-term price action, I had discussed this in the EUR/JPY Technical piece published on Tuesday, aptly entitled ‘Playing Central Bank Dichotomies.’ 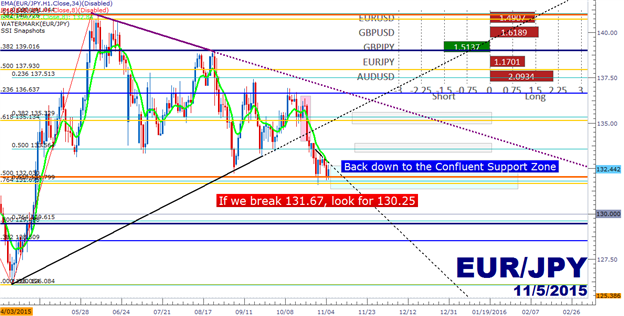