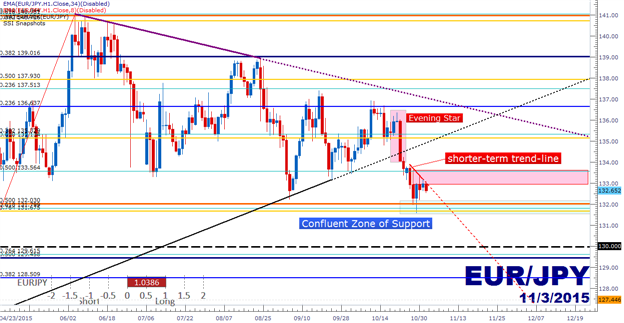 In our previous article, we looked at short setups in EUR/JPY after the 6-month symmetrical wedge gave way to falling prices after a dovish-ECB told markets that they’d look to re-examine QE at their December meeting. As we outlined in that piece, one of the few motivators for a long EUR/JPY position would be the prospect of additional easing from the Bank of Japan at their most recent meeting last Thursday. Well, that meeting came and went and there was no ‘Halloween Surprise’ from the BoJ this year; and this further exposes the Yen as a candidate for carry trades, particularly against weak or potentially-weak currencies like the Euro that may be sitting in front of an increased stimulus outlay.

This confluent zone of support marked the lows of the most recent run, and prices have continued to peel higher after setting this new intermediate-term low. But as prices have moved higher, sellers have continued to jump into EUR/JPY… and they’ve been getting increasingly aggressive, as can be evidenced by the lower-highs seen over the past five trading days (post-BoJ), with the red trend-line on the chart below covering the most recent set of price action highs.

This can open the door for a multitude of approaches looking to jump on the short EUR/JPY trade. For traders looking to keep risk tighter, or for those wanting to use a shorter-term approach, stops above these progressively lower-highs can be utilized for a tighter element of control on the position. This could entail stops placed within the 133-133.60 zone of potential resistance (shown in the red rectangle on the below chart). This would open the door for profit targets in that same confluent zone of support between 132.03 down to 131.67.

But the real allure of the short setup in EUR/JPY isn’t a potential 100-pip runner. The real attractiveness is the prospect for that monetary policy divergence between these two economies to really drive prices for an extended period of time, and for that purpose, profit targets at 130-flat (major psychological level), 129.45 (50% retracement of the ‘big picture move,’ taking the low from the year 2000 to the 2008 high), 128.50 (38.2% of the tertiary move, taking the 2012 pre-‘Whatever it takes,’ low to the 2015 high), and then 127.50 (next major psychological level).