Two Ways to Trade the Euro and the Dollar

1. Last week ended on an interesting tune: On Wednesday, the Federal Reserve took on a hawkish stance that saw the removal of the phrase ‘monitor developments abroad’ from the statement. We saw the US Dollar strengthen going into the release, and as the statement came into the market, the dollar continued to firm up to a new 6-month-high. But shortly after setting that high, sellers came in to bring prices lower on Friday, creating a Doji at resistance on the weekly chart to close the week. With a heavy week of data ahead of us, and with NFP on Friday, we’re likely to see significant volatility in the US Dollar this week.

The short-term setup could look attractive for reversal entries should we break below 11,980 on the Dow Jones FXCM Dollar Index. This would create an evening star formation on the Weekly chart, and this is a bearish reversal pattern that can be triggered if looking for a short-term swing to continue lower.

The bigger-picture setup is to the long-side in the direction of the longer-term trend, with the challenge being that we’re currently trading so near resistance. To trade the long-side, traders can look for a higher-low to develop above the low of morning star formation created in the early portion of October (indicated with the red-line on the below chart).

2. Now that Central Banks have spoken, we may be able to jump on some themes: The largest single-driver of price movements across markets over the past six years have been Central Banks. You’ve probably heard a lot about ‘the new normal,’ over the past few years, and this seems to be a big part of that: Central Banks can drive themes for extended periods of time, and as the old saying goes: ‘You can’t fight the Fed.’

And with the Fed taking on a more-hawkish stance towards a 2015 rate hike, potentially even looking at December for that first hike in over nine years, investors may be able to jump into USD in anticipation of continued strength as the Fed brings on that first rate hike. This has become so profound that investors will often not wait around to get that confirmation from a Central Bank, like we saw in the chart above and the fact that the US Dollar put in more strength in the week leading up to the October FOMC statement than it did during the week of the actual announcement.

And while USD-strength on the back of a more hawkish Fed might be a more complicated prospect given the continued posturing from the Central Bank, one area where we could probably get more confidence behind future Central Bank movements is Europe, and the Euro. The week before last, and one of the big reasons for such USD-strength leading into last week’s FOMC

announcement, was the news that the European Central Bank is going to re-examine their QE-policy at their next meeting in December. As the European economy continues to grapple with deflationary pressure, it’s become increasingly obvious that the ECB is going to need to ramp-up their QE program. And while the ECB hasn’t yet made any formal announcements, they have made and announcement that they’re going to consider ramping up the program, and in this Central Bank-driven environment, that may be enough for investors to jump on that theme in anticipation.

On EUR/USD specifically, we saw a dramatic drop on Wednesday as this more-hawkish-than-expected statement found its way into the market. But in the three trading days since, we’ve seen EUR/USD crawl higher within a bear-flag formation. Bear-flags are not unfamiliar to EUR/USD, as we were in a 7+ month channel before last week’s FOMC announcement finally gave us a concerted break below the flag. This is relevant because it can help us identify a resistance level with which stops or new short-side entries could be based.

On the chart below, we’re looking at the hourly EUR/USD setup; and notice how consistently most price action over the past three days has been confined to this upward-sloping channel. The level of 1.1087 is the 50% retracement of the most recent major move, taking the March low to the August high. Traders can look to trade EUR/USD either inside or outside right now. To trade this move inside, traders can wait for price action to move up towards these resistance levels, and once a lower-high prints below 1.1095 (the previous swing-high), a short-side entry could be taken with a stop above the highs and an initial target at 1.1000 (the projection of the bear-flag trend channel, denoted with a green-line on the chart).

For those looking to trade the move outside, a break of 1.1000 could signal down-side resumption, which would be a new ‘lower-low’ while also proffering a break of the bottom-side of the flag, with targets cast towards 1.0934 (the 61.8% fib retracement of the most recent major move), and then 1.0900 (the prior price action swing-low). 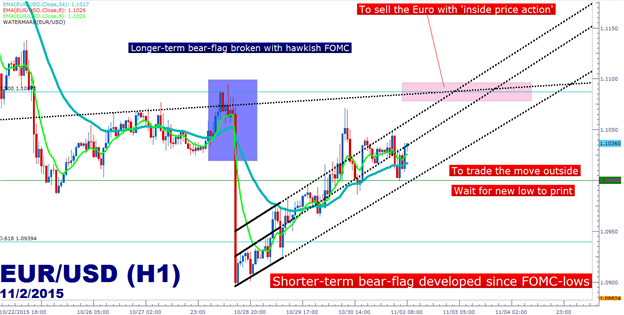 3. China could drive markets again: Equity markets haven’t yet opened in the US and we’ve already seen a mixed bag of data out of China. On Saturday night, Chinese Manufacturing PMI came in slightly below estimates at 49.8 versus an expectation of 50, and on Sunday night, Caixin Manufacturing PMI came in at 48.3 versus an expectation of 47.6. We get the larger headline Caixin PMI tomorrow night (this includes services PMI to give a broader overall-read), and this could provide significant drive to markets.

But perhaps more interesting is the fact that Chinese equities appear to have paused their recent ascent after a crushing August and first half of September. From mid-September to mid-October, we saw then Shenzhen Composite claw back over 34% of its value, and keep in mind that much of this was happening as Chinese data looked worse and worse. This was largely on the premise of the expectation of additional stimulus policies to be rolled out by Beijing along with the Fed taking a more cautious approach towards rate hikes while the rest of the world seemingly looked to loosen or ease monetary policy.

But the past few days haven’t been kind to Chinese equities. We saw the Shanghai Composite move lower by -1.7% to open up the week, and the Shenzhen Composite posted lower by -1.33%.

Should volatility in Asia pick up this week, led by Chinese stocks, we could see an increase in volatility now that the Fed has taken a more hawkish stance towards a 2015 rate hike. We just ran into a major level of resistance on the Shenzhen Composite, the 38.2% retracement of the ‘big picture move,’ taking the 2005 low to the 2015 high. 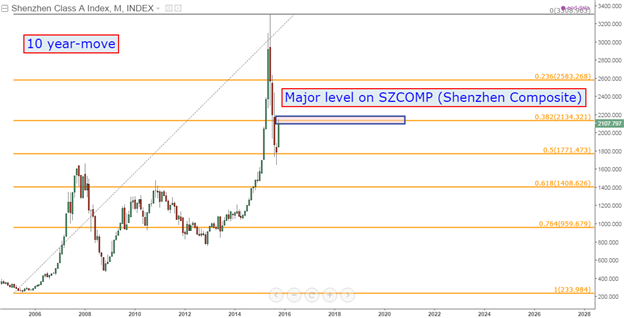