An Exuberantly Bullish US Dollar Awaits the Fed

1. Here Comes the Fed: Price action today will likely march to the beat of Ms. Janet Yellen, as the Federal Reserve meeting at 2PM will dominate financial media and many markets until we get to the actual announcement. There is little expectation for a move today. Despite Ms. Yellen’s repeated claims that October is a ‘live meeting,’ in which the bank could elect to hold a press conference should they decide to make a move, the multiple pressure points in the global economy combined with softness in US data points to the fact that we’re probably not going to see a move from a Central Bank that has been cautious, to say the least.

After the tech bust of 2000/2001 led to the Financial Collapse of 2007, the Fed has taken quite a bit of criticism for their inconsistency in managing market expectations and setting interest rates. After all, the ‘tech bubble’ and the ‘housing bubble’ didn’t just blow themselves up; it was fast and loose monetary policy that created environments in which investors constantly chased prices in bubbling markets until there was no one left to buy. So then the bubble popped. And even though former Fed chairman Mr. Ben Bernanke has already written his book ‘The Courage to Act,’ and claimed that the Fed ‘worked’ by averting a full-system collapse in 2007, if the past two months have shown us anything – we’re not out of the woods yet, as we’re still limping along with emergency policy. This story is far from over.

The big fear is that even more ‘extraordinary accommodation’ to markets in the form of zero-interest rates is creating another more-troubling scenario for the global economy. We’re at the point where investors are chasing bubbling markets again, and this time – Central Banks already have stretched balance sheets after multiple salvos of Quantitative Easing. This is why the Fed was so vociferous in talking up an interest rate hike in the first place, to ‘offset excessive risk taking,’ i.e. creating a bubble/bubbles by keeping rates super-low, and compelling investors to invest in riskier asset classes merely to get some form of a return.

So as we near this October meeting at 2PM today, the details are what will matter. Specifically, on what the fed is ‘monitoring.’ This was an important word in the September minutes release; as the Fed said that they had held off of a rate hike in order to ‘monitor developments abroad,’ and to ‘continue to monitor inflation developments closely.’

In pertinence to international developments, the September statement had a new line that could allude to a later-than-expected rate hike: The fed said ‘Recent global economic and financial developments may restrain economic activity somewhat and are likely to put further downward pressure on inflation in the near term.’ This is an out for the Fed to get away from a 2015 rate hike, and should they include this statement again in the October statement – a month that has seen the S&P claw back over 10% in value while the Shenzhen composite has traded over 34% off of their lows, this could be taken as the Fed incorporating a very-dovish tone.

And on the vote – we had a 9-1 vote at the last meeting with the lone dissenter voting for a rate hike thought to be Mr. Jeffrey Lacker. Should this move up to an 8-2 vote, or perhaps even 7-3, we could see December rate-hike expectations increase as we’d have evidence of a growing divide within the Federal Reserve.

The primary asset for watching this release is the US Dollar index, and below we’re looking at the FXCM Dollar index. Notice how after setting a 12-year high in April of this year, USD has been making ‘lower-highs.’ But shortly after setting that high, the US Dollar took a swan dive by over 5% in a month to set a new low at 11.634. Since then, prices have been congesting deeper and deeper into this symmetrical wedge formation of ‘lower-highs’ and ‘higher-lows.’ Christopher Vecchio outlined pre-FOMC trade setups in his morning piece today.

The near-term bias is to the short-side of the dollar under the expectation that the Fed will take on a familiar dovish tone. Should the Fed take on a more hawkish tone, or should we see dissenters climb in the vote, we can see the top-side of this wedge give way as rate hike expectations get moved closer. 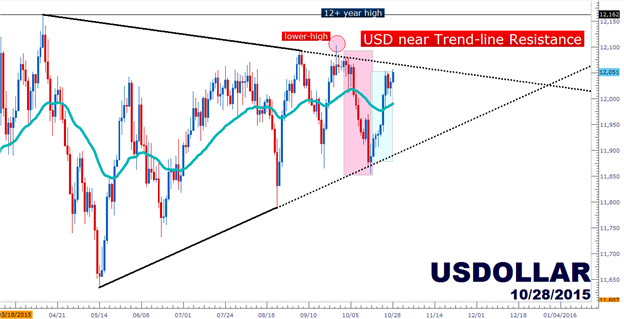 2. Apple Earnings look Strong, but iPhone sales missed and China ticked lower: we discussed the relevance of Apple earnings in terms of the larger macroeconomic landscape yesterday, and as outlandish as it may sound – the sales performance of a cellular phone can be reasonably thought of as a leading indicator of consumer activity in the most important economy in the world (China).

Our own Ilya Spivak wrote up a phenomenal recap and explanation of Apple earnings after yesterday’s release, and in the article, Ilya says ‘Apple’s success is very much dependent on the sale of the iPhone. The firm sold 48 million units of the device in the third quarter for $32.2 billion in net sales. This fell below analysts’ estimates of 48.5 million, but still contributed 62.5% of overall revenues for the quarter.’

So, while EPS and revenue beat estimates, the company’s core product failed to meet sales expectations, and Ilya also noted in reference to China, that there was a ‘5.4 percent downtick from the previous quarter.’

So while the headlines were positive, the numbers inside of the release were less encouraging. On the conference call, Tim Cook added that he didn’t see any slowdown in China. During the call, Mr. Cook said “Frankly if I were to shut off my web and shut off the TV and just look at how many customers are coming into our stores regardless of whether they’re buying, how many people are coming online, and in additional looking at our sales trends, I wouldn’t know that there was any economic issue at all in China.’

This contrasts heavily with Chinese smartphone giant Xiaomi, which has become the second most valuable startup in the world (only behind Uber) as they built a technology empire very quickly on the back of cheap mobile phones with iPhone-like features, specifically targeted towards the Chinese market. At the outset of the year, Xiaomi set a target to sell 100 million phones; only to scale that target back to 80 million in March and then in July, the company reported that they had sold 34.7 million in the first half. Now those estimates are dipping down towards the 70 million range and this is troublesome. These phones usually sell for between $100 to $300, which is a key demographic in China. The iPhone, on the other hand, sells for between $650 and $1,000, which is aimed at the upper-echelon of the Chinese economy.

When you hear about the ‘rising middle class’ or the ‘growing consumer segment,’ this is the demographic that Xiaomi is addressing, not Apple. So while Apple saw a small down-tick in iPhone sales last quarter, Xiaomi has been grappling with a much more severe problem as its this ‘middle class’ of China that has been hit the hardest by wild stock market swings and the initial stages of slowdown.

As confirmation of this, Chinese equity markets finally went down last night after Apple earnings beat estimates, and there was no late-session rip higher as has become normal since the middle of September. The Shanghai Composite was down by -1.72%, Shenzhen Composite was down by -2.22%, and Hong Kong moved lower by -.8%.

On the chart below, we’re looking at the weekly HKG33, based on the Hang Seng index. Notice the voluminous rip higher since mid-September. Last week produced a Doji, which can often come in at the top or bottom of a move, and with the movement lower thus far on the week, we may be at the very early stages of a shooting star formation. If HKG33 finished the week below 22,715, the formation would be complete, and this would be a bearish reversal pattern to short the market with the prospect of a lower-high coming in the market.