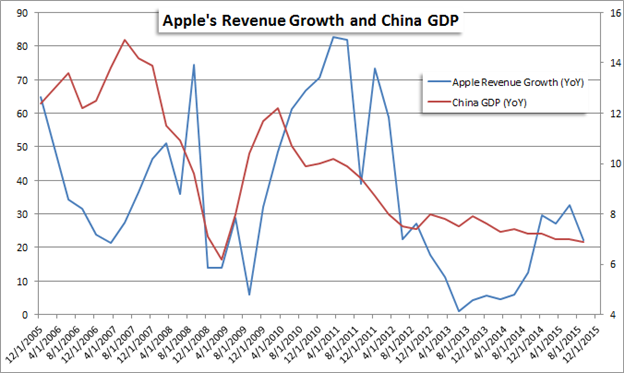 Third-quarter US corporate earnings season saw releases from major corporations on Tuesday, with Apple Inc. being the most notable on the docket. Outside of the Federal Reserve’s FOMC rate decision and othe top economic news, Apple’s earning report was a seen as crucial pace-setter for overall market sentiment.

Apple Inc. posted a third-quarter profit of $11.1 billion, or $1.96 per share on $51.5 billion of revenue. The company topped analysts’ estimates on both the top and bottom lines, showing year-on-year growth of 38 percent for earnings and 22.2 percent for revenue.

Apple has been heavily reliant on Chinese growth prospects. CEO Tim Cook is looking to the East Asian giant to add new customers. The firm generated revenues of $12.5 billion in China in the third-quarter. While this was an increase of 99 percent year-on-year, it marked 5.4 percent downtick from the previous quarter. While growth in China has been slowing, Apple is still predicting that it will become its biggest market.

Apple’s success is very much dependent on the sale of the iPhone. The firm sold 48 million units of the device in the third quarter for $32.2 billion in net sales. This fell below analysts’ estimates of 48.5 million but still contributed 62.5 percent of overall revenues for the quarter.

Apple’s stock price has shown a rising positive correlation with the S&P 500, acting as something of a bellwether for the market as a whole. Apple ended the earnings report with guidance for the next quarter, where they expect revenues between $75.5 and $77.5 billion amid the holiday shopping season. It seems prudent watch Apple’s next quarterly earnings for clues about the direction of US stocks as well as the company’s ability to increase sales of iPhones in China as an indicator of Chinese growth.