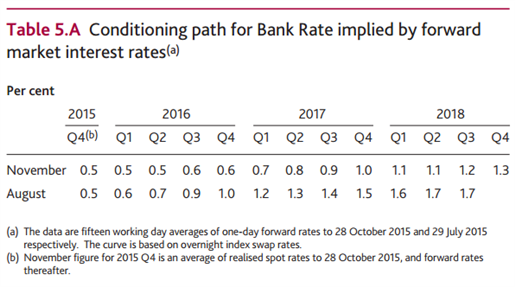 Thanks to what’s informally known as the Bank of England’s “Super Thursday,” the British Pound was smacked lower this morning after a seemingly unexpected pivot in tone from the Bank of England’s Monetary Policy Committee. The BoE reduced its inflation forecasts for the rest of 2015, as well as in 2016 to 2017, and introduced a new, three-year inflation target, that called for an overshoot to +2.2% y/y.

Growth forecasts were also mixed, with the 2015 and 2016 growth forecasts revised lower, and the 2017 nudged up, with a new, 2018 forecast (+2.5%) introduced. The biggest factor for the British Pound, however, has been the reduction in market forward rates between August and November; concurrently, the BoE’s commentary that the eventual rate rise will be gradual, while offering a disclaimer that this is “an expectation, not a promise,” sees the previously hawkish BoE realigning itself with the more dovish market expectations, not the other way around (ahead of the meeting, it was expected that the BoE would give higher inflation forecasts to push back against recent dovish expectations having been priced in). These lower expectations are displayed in the chart below.

You can read the Bank of England’s Quarterly Inflation Report in its entirety here. 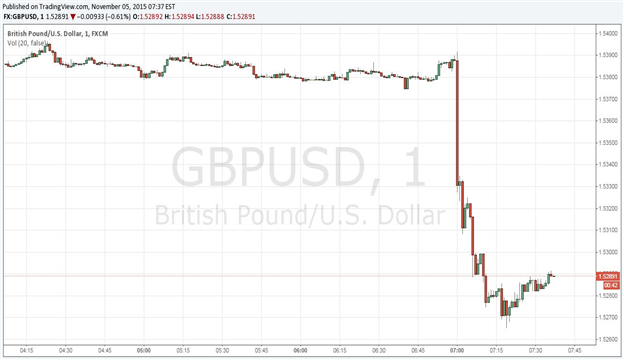 After the data releases and commentary contained within, GBP/USD quickly dove towards its lowest levels over the past week. GBP/USD opened up the 12:00 GMT hour trading at $1.5388, and hit a session low of $1.5265 within the first 20-minutes of trading thereafter. At the time of writing, as Governor Mark Carney's press conference was just getting underway, GBP/USD traded at $1.5290.