- Reserve Bank of New Zealand to Reduce Cash Rate to Record-Low of 2.50%.

According to a Bloomberg News survey, only 15 of the 18 economists polled forecasts the Reserve Bank of New Zealand (RBNZ) to cut the benchmark interest rate to 2.50% but, the market reaction may not be clear cut should Governor Graeme Wheeler signal an imminent end to the easing cycle.

The RBNZ may sound less-dovish this time around as the previous rate-cuts work their way through the real economy, and the New Zealand dollar may continue to recoup the losses from earlier this year should the central bank adopt an improved outlook for the region and show a greater willingness to shift gears over the medium to long-term horizon.

The weakening outlook for global growth accompanied by the slowdown in employment may encourage RBNZ Governor Wheeler to further insulate the real economy, and the local currency stands at risk of facing additional headwinds in 2016 should the central bank .

However, the RBNZ may look to conclude its easing cycle amid improving demand from home and abroad, and the New Zealand dollar may face a larger correction in the days ahead should the central bank endorse a wait-and-see approach. 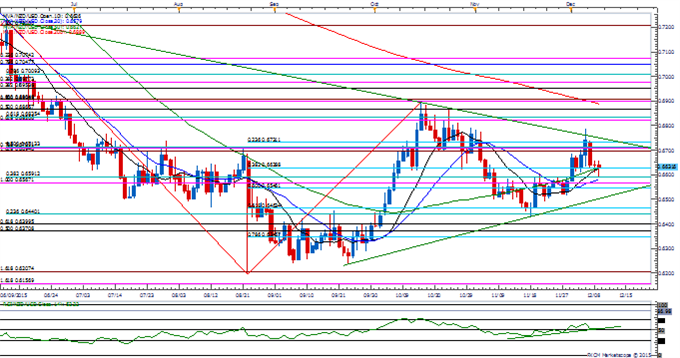 The Reserve Bank of New Zealand (RBNZ) held the Official Cash Rate (OCR) at the record-low of 2.75% in October as the previous rate-cuts continue to work their way through the real economy. Even though Governor Graeme Wheeler keeps the door open to implement lower borrowing-costs, it seems as though the RBNZ appears to be getting a step closer to the end of its easing cycle as the central bank softens the verbal intervention on the local currency. Even though the RBNZ largely retained a dovish outlook for monetary policy, NZD/USD quickly bounced back from the 0.6620 region to close the day at 0.6676.

COT-Small British Pound Traders are Most Short Since April Low

Webinar: USD Setups in Focus as NFP Clears the Way for Fed Hike