Crude Oil plunged to new 6-year lows on Monday, the trading day after OPEC decided to lift their output target (read: drill baby, drill), which pushed the price of Oil below the August 24th low. We stated earlier that what separates this move from the August move is that the August move was a momentum-based worldwide dump of risk assets whereas the current move towards presumed new lows is more fundamentally driven by the strong dollar, weak demand, and increasing production. Looking across the board, the easiest, most likely component that would take Oil higher would be a sell-off in the US Dollar were the Fed to disappoint USD Bulls in the same manner that the ECB disappointed EUR bears and those in Mario Draghi’s crowded trade. The US Dollar is inversely correlated to the price of US Oil so a weaker US Dollar would presumably send US Oil (and other dollar-denominated assets higher.

To Learn What FXCM’s Most Successful Traders Do on a Consistent Basis, sign up for our free guide here.

A pertinent, yet hard to answer question when the price of an asset is trading at new multi-year highs is where the next target is. The weaker answer to a strong question is the prior multi-year extreme. On Crude Oil, that closing low of 2008 happened on December 18th, 2008 at $33.87, whereas the intraday low sits at 32.40, of December 19th, 2008. Between the extremes of 2008 and where we presently are lay a few Fibonacci relationships. ,Below the August 24th, Black Monday low is the 1.414-1.618% Fibonacci extension as shown on the chart. That zone of Fibonacci confluence is between $36.55-$34.85. If price breaks lower from there, we would likely turn our focus toward the price extremes mentioned above.

As a trader who believes that price and the collective minds of market participants have a memory of turns, keep an eye on the price action of Oil around December 18th & 19th where we made lows seven years ago. Bearish sentiment will likely build into that, and that is a few days after the anticipated FOMC meeting where the Fed is expected to raise rates for the first time since 2006. Should a push lower in Crude Oil take place, USD/CAD will likely be making a confirming move toward 1.3750/1.4000. From a sentiment perspective, our own internal readings are showing an SSI reading of +2.555.We use our SSI as a contrarian indicator to price action, and the fact that the majority of traders are long gives signal that the US Oil may continue lower. This trend lower in US Oil will remain in place as price trades below resistance of today’s high at $40.11, a level that acted as support before today’s ~5% decline. 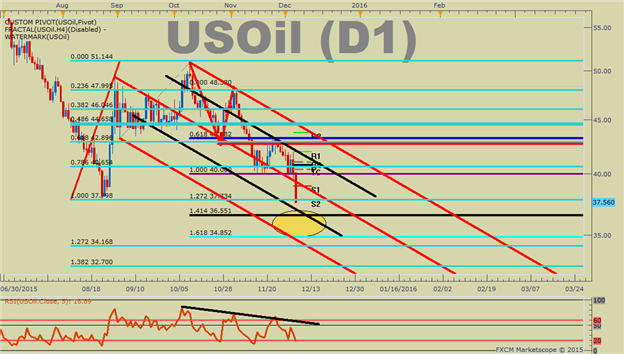