Australia’s 2Q Consumer Price Index (CPI) may trigger a near-term breakout in the AUD/USD should the data print put increased pressure on the Reserve Bank of Australia (RBA) to normalize monetary policy sooner rather than later.

Another uptick in the headline reading for inflation may undermine the neutral tone held by RBA Governor Glenn Stevens as price growth comes up against the upper bounds of the central bank’s 1-3% target band, and the AUD/USD may continue to mark fresh 2014 highs in the second-half of the year should a growing number of officials adopt a more hawkish tone for monetary policy.

The pickup in the growth rate along with the improvement in the labor market may generate a strong inflation print, and heightening price pressures in Australia may heighten the appeal of the higher-yielding currency as it limits the central bank’s scope to further reduce the benchmark interest rate.

However, subdued wage growth paired with the downturn in private sector consumption may limit the upside risk for inflation, and a dismal CPI report may ultimately push the AUD/USD back down towards the key 0.9200 handle as it drags on interest rate expectations. 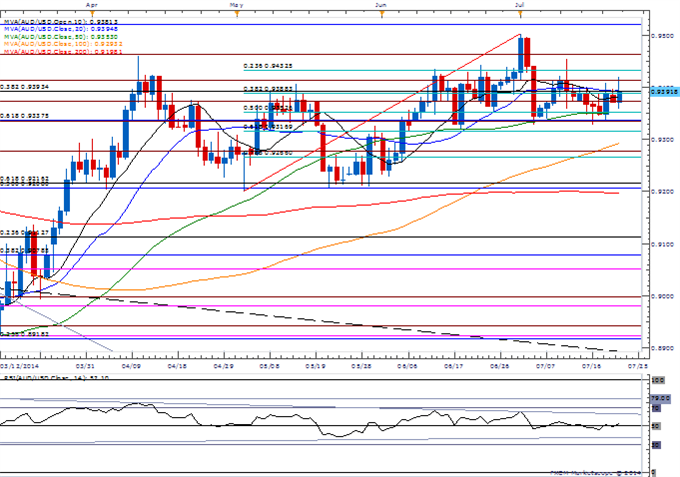 Australia’s Consumer Price Index (CPI) climbed an annualized 2.9% in the first quarter after expanding 2.7% during the last three-months of 2013, while the core rate of inflation held steady at 2.6% amid forecasts for a 2.9% print. The weaker-than-expected CPI report dragged on the Australian dollar, with the AUD/USD slipping below the 0.9300 handle, and the higher-yielding currency struggled to holds its ground throughout the day as the pair closed at 0.9286.