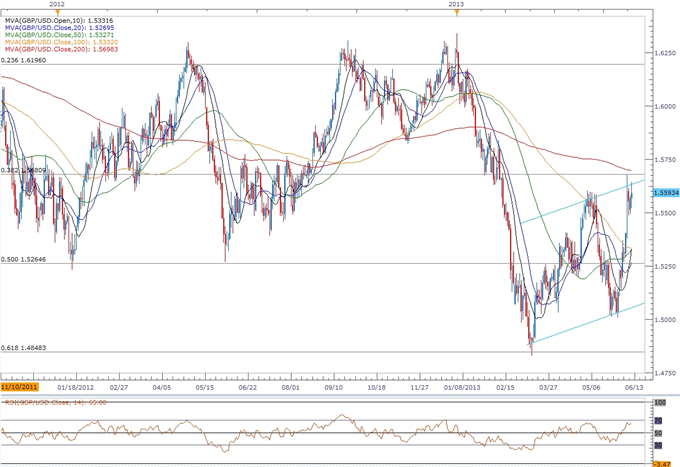 U.K. Jobless Claims are expected to contract another 5.0K in May and the ongoing improvement in the labor market should increase the appeal of the British Pound as the region skirts a triple-dip recession. As the Bank of England (BoE) sees a sustainable recovery in Britain, the Monetary Policy Committee appears to be slowly moving away from its easing cycle, and we may see a growing number of central bank officials adopt a more hawkish tone for monetary policy as the board continues to operate under its inflation-targeting framework.

The pickup in manufacturing and service-based activity may encourage U.K. firms to expand their labor force, and a positive development should produce a bullish reaction in the sterling as market participants scale back bets for more quantitative easing. However, the slowdown in private sector consumption may prompt businesses to scale back on hiring, and a dismal development may weigh on the exchange rate as it renews speculation for additional monetary support.

Although the shift in the BOE’s policy outlook favors a bullish outlook for the British Pound, the GBPUSD appears to be capped by the 38.2% Fibonacci retracement from the 2009 low to high around 1.5680, and we may see the pair consolidate further as the relative strength index comes up against overbought territory. Nevertheless, as an upward trending channel appears to be taking shape, we will look to buy pullbacks in the GBPUSD on a longer-term scale, and the sterling may outperform in the second-half of the year as the BOE appears to be slowly moving away from its easing cycle.

Forecasts for another drop in U.K. Jobless Claims instills a bullish outlook for the sterling, and a positive development may pave the way for a long British Pound trade as market participants scale back bets for more quantitative easing. Therefore, if claims contract 5.0K or greater in May, we will need to see a green, five-minute candle following the release to generate a buy entry on two-lots of GBPUSD. Once these conditions are met, we will set the initial stop at the nearby swing low or a reasonable distance from the entry, and this risk will establish our first target. The second objective will be based on discretion, and we will move the stop on the second lot to cost once the first trade hits its mark in an effort to preserve our profits.

On the other hand, the persistent slack in the real economy may continue to drag on the labor market, and a dismal development may spark a selloff in the sterling as it dampens the outlook for growth. As a result, if the report misses market expectations, we will carry out the same strategy for a short pound-dollar trade as the long position laid out above, just in the opposite direction.

Unemployment claims slipped another 7.3K in April following a revised 9.9K contraction the month prior, while the claimant count rate narrowed to 4.5% from 4.6% to mark the lowest rate since April 2011. Indeed, the British Pound tracked higher following the better-than-expected print, with the GBPUSD climbing above the 1.5250 region, but we saw the sterling consolidate during the North American trade as the pair closed at 1.5233.