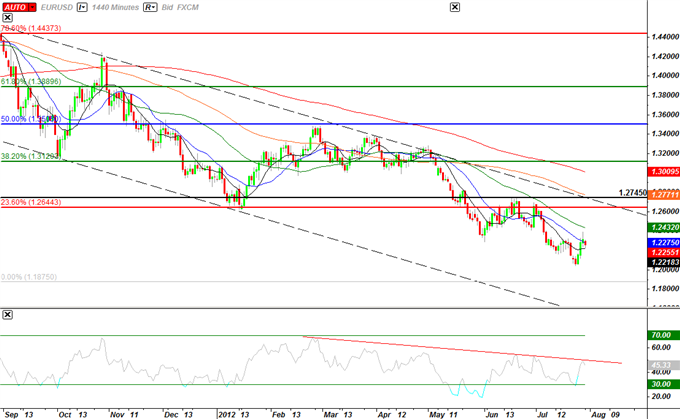 Unemployment in Europe’s largest economy is expected to increase 7K in June and the weakening outlook for the euro-area may produce a selloff in the single currency as it raises the threat for a prolonged recession. In turn, there’s growing speculation that the European Central Bank will take additional steps in August to stem the downside risks for growth and inflation, but we may see the Governing Council carryout its easing cycle throughout the remainder of the year in an effort to stem the risk for contagion.

The pickup in demands paired with the rise in global trade may encourage businesses to expand their labor force, and a positive development may increase the appeal of the single currency as it dampens the scope of seeing the ECB implement a range of policy tools over the coming months. However, the ongoing weakness in manufacturing and service-based activity may push firms to scale back on hiring, and another rise in unemployment may trigger a sharp decline in the exchange rate as market participants see the central bank expanding monetary policy further in 2012.

The relief rally in the EURUSD appears to be tapering off as the relative strength index maintains the downward trend from earlier this year, and the pair may continue to give back the rebound from 2010 (1.1875) as the fundamental outlook for Europe turns increasingly bleak. As long as the RSI maintains the bearish trend, we should see further declines in the exchange rate, and we may see the EURUSD carve out a lower high going into August as the ongoing turmoil in the euro-area continues to drag on investor confidence.

Projections for a fourth consecutive rise in unemployment casts a bearish outlook for the single currency, but a positive outcome may set the stage for a long Euro trade as it limits the ECB’s scope to implement a range of tools to shore up the ailing economy. Therefore, if the labor market unexpectedly improves in July, we will need to see a green, five-minute candle following the print to generate a long entry on two-lots of EURUSD. Once these conditions are met, we will set the initial stop at the nearby swing low or a reasonable distance from the entry, and this risk will establish our first objective. The second target will be based on discretion, and we will move the stop on the second lot to cost once the first trade hits its mark in order to lock-in our gains.

In contrast, the ongoing slack within the real economy paired with fears of a prolonged recession may continue to drag on business sentiment, and a marked deterioration in the labor market may produce a sharp selloff in the exchange rate as it fuels expectations for additional monetary support. As a result, if unemployment increases 7K or greater in July, we will carry out the same strategy for a short euro-dollar trade as the long position laid out above, just in the opposite direction.

German’s labor market weakened further in June, with unemployment climbing another 7K following the 1K rise the month prior, while the jobless rate held steady at 6.8% for the seventh consecutive month. Indeed, the ongoing weakness in job growth dragged on the Euro, with the EURUSD slipping below the 1.2450 figure, but we saw the single currency consolidate during the North American trade as the pair ended the day at 1.2442.