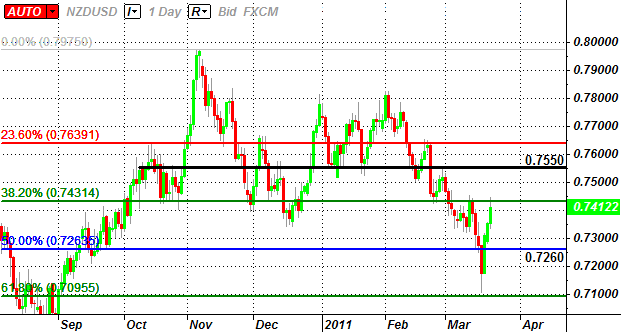 Economic activity in New Zealand is projected to expand 0.1% during the last three-months of 2010 after unexpectedly contracting in the third-quarter, and the rebound in GDP could spur a bullish reaction in the NZD/USD as the central bank maintains a neutral tone for future policy. After lowering the benchmark interest rate to 2.50% earlier this month, Reserve Bank of New Zealand Governor Alan Bollard said GDP “held steady” in the fourth quarter, but went onto say that it was “quite possible” to see a contraction in the growth rate as the devastating earthquake in Christchurch disrupts the economic recovery. In turn, a dismal growth report could spur speculation for lower interest rates, and the central bank may look to support the real economy throughout 2011 in an effort to stem the risk for a double-dip recession.

As businesses increased their rate of production, with private wage growth gathering pace, economic activity may have recovered in the fourth quarter as the region continues to benefit from the expansion in global trade. However, as household confidence slips to a two-year, the ongoing weakness within the private sector could produce an unexpected contraction in the growth rate, and a dismal GDP report is likely to bear down on the exchange rate as interest rate expectations falter. As growth and inflation remain subdued, the RBNZ may see scope to ease monetary policy further over the coming months, and speculation for another rate cut could lead the NZD/USD to pare the advance from the previous year as the central bank aims to shore up the economy.

Expectations for a rebound in GDP certainly reinforces a bullish outlook for the kiwi, and the market reaction following the report could set the stage for a long New Zealand dollar trade as the prospects for future growth improves. Therefore, if the growth rate expands 0.1% or greater in the fourth-quarter, we will need a green, five-minute candle subsequent to the release to establish a buy entry on two-lots of NZD/USD. Once these conditions are fulfilled, we will set the initial stop at the nearby swing low or a reasonable distance from the entry, and this risk will generate our first objective. The second target will be based on discretion and we will move the stop on the second lot to cost once the first trade reaches its mark in an effort to lock-in our profits.

In contrast, the economic shock from the devastating earthquake could lead to an unexpected contraction in 4Q GDP, and a dismal growth report is likely to spur speculation for another rate cut as the central bank aims to encourage a sustainable recovery. As a result, if economic activity holds flat or weakens from the previous period, we will implement the same strategy for a short kiwi-dollar trade as the long position mentioned above, just in reverse.