Rally on Hold as the Euro Fails at 1.3200; Is the Dollar Beatdown Finished?

• ECB May Wait for Investor Deal on Greek Swap – Bloomberg

Higher yielding currencies and risk-correlated assets trended higher in Asia but any momentum was quickly lost after European exchanges opened for trading on Thursday. The recent snag in the Greek debt saga has disappointed market participants once again, as it is becoming quite evident that neither the European Central Bank nor Germany are willing to budge from their respective positions.

In terms of the former, Greece and its creditors remain engaged in intense debt-swap negotiations for the country, which would lessen the struggling nation’s debt burden. The ECB has indicated that it will not be participating in the bond swap, much to the chagrin of private creditors. However, the ECB should not take a haircut on their bond holdings, for two primary reasons. First, the ECB is only holding Greek bonds because of the crisis, and it is well-advertised that without ECB involvement, Greece would be in a much worse scenario. Accordingly, while they do not take a haircut, they should be the last in line to receive repayment for their holdings. This would ensure the explicit support the ECB and thus the Euro-zone has for Greek debt, restoring confidence to private investors in the years ahead, while not compromising the ECB’s role as an independent institution.

In regards to the latter, Germany is now demanding oversight of Greece’s finances, and without that power, they are refusing to provide more funding for the Greek bailout package. Many are surprised by this; however, this was just the next logical step if you viewed the current predicament as the groundwork for the breakup of the Euro-zone. As a rational actor, Germany ultimately wants to do what’s best for…Germany. Given the lack of progress the Greek leadership has made in terms of turning around their economy, it’s obvious that German officials would want control of the money they are dumping into a failing investment. Of course, this threatens Greek sovereignty, but without German help, Greece will go under. This is the most important development of the Euro-zone crisis to date, and should be monitored exceptionally carefully in the coming weeks.

Moving on to credit, a rather curious day has unfolded across European bonds, with the French and Portuguese 10-year bonds outperforming their counterparts, while the Spanish 10-year bond worsened on the day, moving back towards the 5.000 percent yield threshold. With the core bonds strengthening, it the “smart money” is continuing to look for safety. Across the pond, U.S. Treasuries look to weaken slightly on the day, though the 10-year note remains below the psychologically significant 2.000 percent yield threshold. Commodities’ price action was rather uninspiring, though it is worth noting that crude oil continues to decline, trading below $97.00 per barrel, at the time this report was written.

Overall, the day has produced mostly mixed results, with the U.S. Dollar in the middle of the pack among the majors. To no surprise, with equity markets continuing to hold up, the Australian and New Zealand Dollars were the top two performers, while the Euro and Swiss Franc trailed the pack. Ahead of Federal Reserve Chairman Ben Bernanke’s testimony on the U.S. economy, it is worth noting that the USD/JPY continued to crawl towards its post-war record low at 75.557, trading at 76.144, at the time this report was written. With both the USD/JPY and EUR/CHF close to key levels that would warrant action by their respective central banks, it appears the next bout of government interventions is on the horizon. 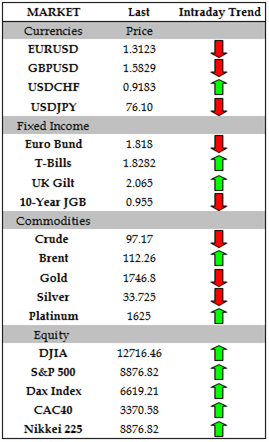 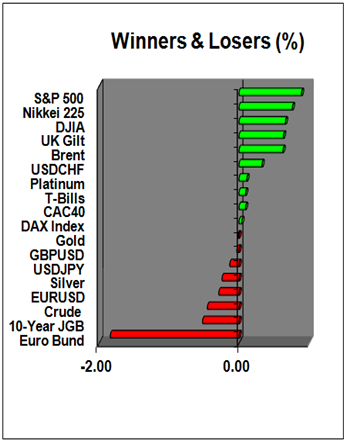 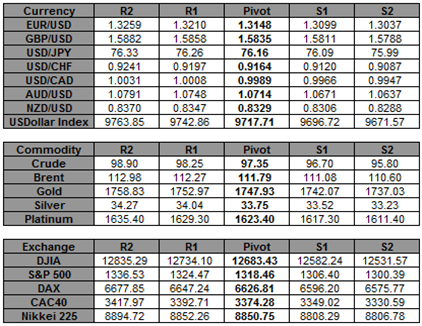