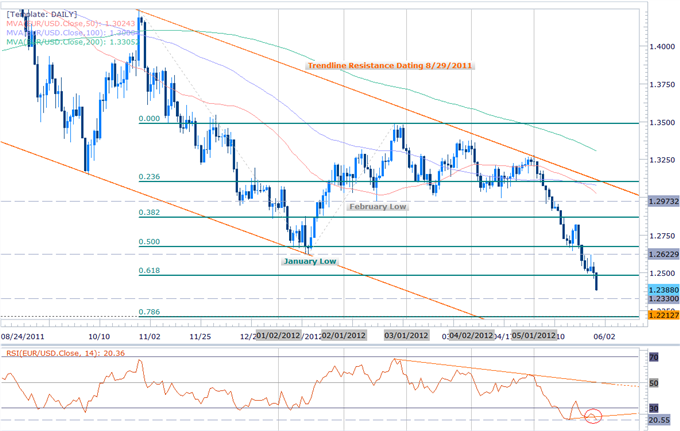 EURUSD an Active Scalp as Technicals Align with Fear

We have been aggressively scalping downside targets in the EUR/USD as a steady stream of negative headlines out of Europe continue to weigh heavily on future prospects for the single currency. The pair has remained under pressure for the entire month after making its monthly high on the first of May at 1.3283 with today’s break below key Fibonacci support offering further conviction on our directional bias.

A look at the encompassing structure sees the euro trading within the confines of a broad descending channel formation dating back to August 29th with the single currency breaking below our monthly objective at the 61.8% Fibonacci extension taken form the October and February highs at 1.2485. Initial downside objectives are now eyed at 1.2330 and the 78.6% extension at 1.2215. Note that the daily relative strength index, while in over-sold territory, remains above the 20.55 low made back in 2010 when the pair made fresh lows below 1.19. The last time we saw daily RSI dip below this level was during the second half of 2008 when the worst financial crisis since the Great Depression sparked rapid advances in the US dollar as investors flocked into the ‘safety’ of the world’s reserve currency. That said, should the European debt crisis continue to deteriorate as expected, look for the euro to remain heavy despite the current oversold conditions with a break below the RSI lows at 20.55 likely to spark a more substantial sell-off in the single currency. A breach back above the 61.8% extension at 1.2485 invalidates this specific setup, with a continued move above the 1.25-handle eyeing subsequent topside targets. 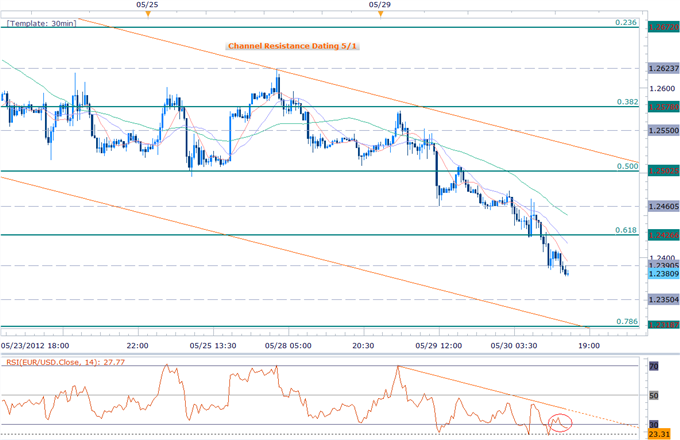 Our scalp chart shows the EUR/USD continuing to trade within the confines of a descending channel formation dating back to the 1st of the month with the single currency pressing soft support at 1.2390 ahead of the US close. Downside scalp targets are seen at 1.2350, the 78.6% Fibonacci extension taken from the May 1st and 21st crests at 1.2320, and channel support (currently around 1.2280-1.23). A break below this mark offers further conviction on our directional bias with such a scenario eyeing subsequent support targets at 1.2260 and the 78.6% Fibonacci extension noted on our daily chart above, at 1.2215. I

*Note the scalp will not be active until a confirmed break below 1.2350 or a rebound off 1.2390 or subsequent resistance level with RSI conviction. We will remain flexible with our bias with a break above our topside limit at the 1.25-handle eying topside targets.

Join Michael on Thursday morning for a Live Scalping Webinar at 1400GMT (10ET) to cover this scalp and more.

For more information on his strategy, refer to Michael’s Introduction to Scalping for Beginners Webinar