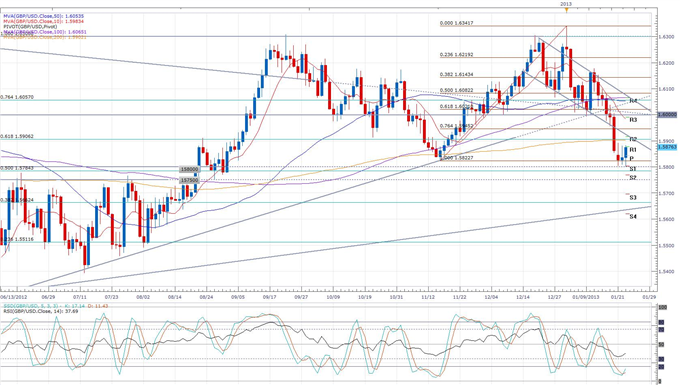 It’s been an exciting session for Cable traders.

The Pound fell to a new 4-month low, slightly above 1.5800 against the US Dollar, at the beginning of the European hours. The pair steadily fell following BoE Governor King’s comments yesterday about the possibility of giving up the central bank’s 2% inflation target for a nominal GDP target. King said he still supports the inflation target. King’s comments were referring to a statement by incoming BoE Governor Mark Carney, who said a growth target should be considered by central bankers without mentioning specific economies.

Then, as UK Prime Minister Cameron began to speak about a referendum on EU membership, GBPUSD began a rebound towards 1.5850 as Carney remained optimistic that the UK will succeed in negotiating EU treaty changes. The rally continued as high as 1.5880 when UK jobless claims fell more than expected.

The fourth quarter UK GDP will be announced on Friday, and Governor King said yesterday that he expects the economy to have depressed from Q3, which was boosted by the Olympics. In response to Cameron, German Foreign Minister Westerwelle said Germany wants ambitious reform of the Euro-area, and that he wants the UK to be an active part of the European Union.

In other economic release, Euro-zone government debt was announced at 90.0% of GDP in Q3, slightly higher than 89.9% in Q2. Also, French Finance Minister Moscovici said that France maintains a 0.8% growth forecast for 2013.

Later today, the Bank of Canada rate decision will be released at 15:00 GMT, and the bank is expected to maintain a 1.00% interest rate target.