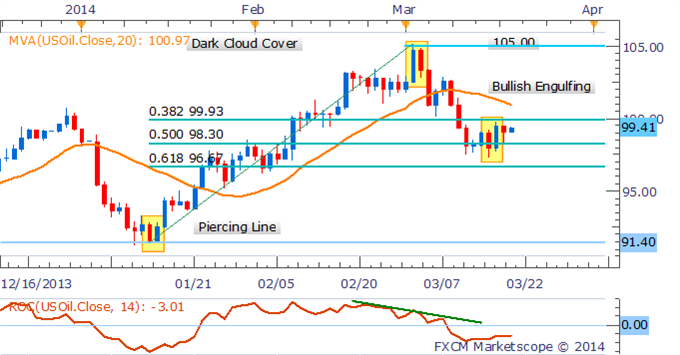 Gold suffered its biggest daily percentage loss since December on the back of a hawkish tone from Federal Reserve officials at their March meeting, which drove demand for the US Dollar. A continued recovery in the greenback may yet put further selling pressure on gold and silver while crude may correct if risk-aversion takes ahold of the market.

Gold and silver sank following the conclusion of the Federal Reserve March meeting where a further $10bn in stimulus cuts was announced that was married with a hawkish tone from the central bank.The pursuant press conference with Fed Chair Janet Yellen and the release of new economic projections offered further fodder for traders and fuelled declines for the precious metals.

Dr. Yellen suggested the Fed would continue winding back its asset purchase program in measured steps at future meetings supported by gradual improvements in the labour market, which would see the end of quantitative easing later this year. Additionally, a critical takeaway from the press conference was the suggestion that a rate hike may occur within 6 months of ending the record stimulus program. The firmer commitment from the central bank towards monetary policy normalisation drove traders back to the US Dollar, which in turn weighed on gold and silver prices.

Surprisingly, crude oil strengthened following the Fed meeting, which is unusual given the commodity’s risk-sensitive profile and the declines witnessed in US equities. The gains may be attributable to the upbeat economic outlook provided by policy officials, given a stronger US economy may stand to bolster demand for crude oil.

However, it should also be noted that the WTI contract had been drifting higher ahead of the release, and thus the passing of the event may have been seen as an opportunity for traders to resume their shift into the commodity. The gains followed on from another decline in crude inventories at Cushing, Oklahoma revealed by the weekly DOE inventories report which may have also offered support to oil prices.

Looking ahead, with only second-tier economic data on the calendar in the session ahead the catalyst for an improvement in trader sentiment may remain absent. This could put further gains for the WTI contract into question, despite its uncharacteristic behaviour following the Fed meeting. Moreover, traders’ nascent return to the US Dollar may put further pressure on gold and silver prices as demand for the fiat-money alternatives weakens.

CRUDE OIL TECHNICAL ANALYSIS – A bearish technical bias is retained for crude oil as the commodity remains in a short-term downtrend. While a Bullish Engulfing candlestick pattern on the daily has hinted at a bounce, the signal is yet to receive confirmation from a successive up-day. Support rests near the 50% Fib Retracement level ($98.30) while the psychologically-significant $100.00 handle offers a notable resistance level.

GOLD TECHNICAL ANALYSIS – Several bearish technical signals have emerged for Gold which may be warning of further declines for the commodity. Firstly, the short-term trend has shifted to the downside, indicated by prices moving below their 20 SMA in addition to the dip into negative territory by the ROC tool and a break of the ascending trend channel. This follows from a warning offered by the Bearish Engulfing candlestick pattern that formed near the key $1,392 resistance level. This opens up further declines for the precious metal with targets offered by the $1,320 as the next noteworthy support and $13,10 (the 38.2% Fib Retracement level). 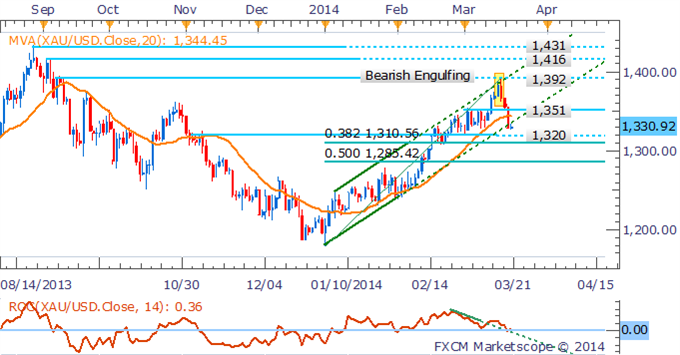 SILVER TECHNICAL ANALYSIS – Silver remains in a short-term downtrend which leaves the downside preferred. A break below key support at $20.50 would open up the 2014 lows at $19.00. 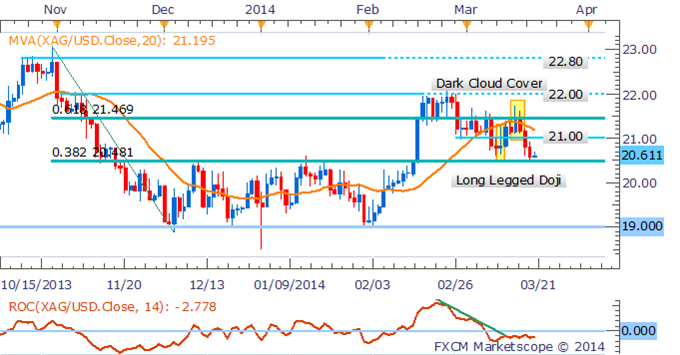 COPPER TECHNICAL ANALYSIS– The downside target offered yesterday of 2.910 was hit overnight and while we’re back at key resistance at $3.00 new shorts may offer limited potential. This is based on the bullish reversal signal offered by the most Hammer candlestick on the daily. Confirmation from a successive up-day and a break above $3.00 could open up more significant recovery for the commodity. 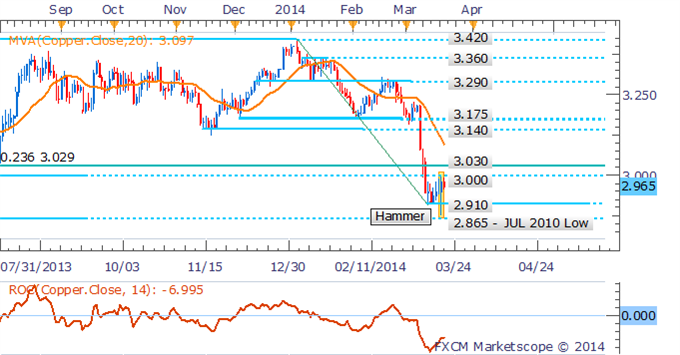