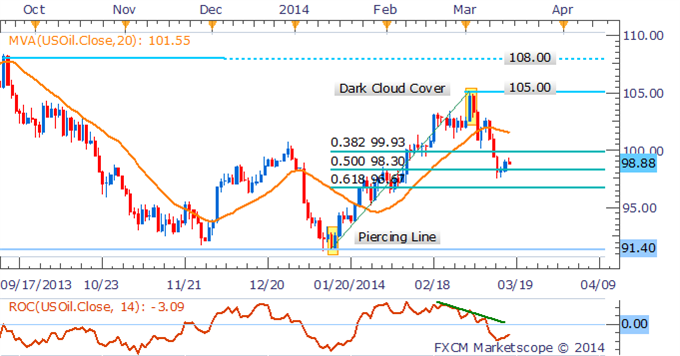 Gold’s recent bull run is showing signs of slowing in early European trading as investors discount geopolitical concerns and shift out of safe-havens. Meanwhile copper is showing tentative signs of a recovery as fresh negative news-flow from China remains absent.

The continued stand-off between Russia and Ukraine helped bolster safe-haven demand for gold during the past week which likely contributed to its break above $1,380 on Friday. Considerable uncertainty still remains regarding how the stand-off may be resolved, which has been complicated by a vote to return Crimea to its former master over the weekend.

Despite the weekend’s developments gold is struggling to climb higher in early European trading. This likely comes as investors weigh the prospect of escalating geopolitical tensions against the opportunity to capture yields in equities and high-yielding currencies like the Australian Dollar. Additionally, some profit-taking may be partly attributable to today’s pullback, given the dramatic run-up in the gold price to a six month high.

However, with Moscow showing little regard to threats of sanctions from the West, there remains the possibility of a resurgence in risk aversion which could quickly send traders back to gold in the coming week.

Following last week’s dramatic declines in copper on the back of discouraging economic data from China, the base metal has seen some stabilization around $2.930. With few major economic releases scheduled from the Asian giant in the session ahead, an absence of fresh negative news-flow may lead to some profit-taking on short positions and a bounce for copper.

Meanwhile, crude oil seems unresponsive to the positive shift in sentiment taking place in early European trading as it continues to flounder below the psychologically-significant $100.00 handle. With investors seemingly discounting Ukrainian turmoil and the potential for energy supply disruptions from Russia, there may be few catalysts to bolster the oil price in the session ahead.

CRUDE OIL TECHNICAL ANALYSIS – A bearish technical bias is retained for crude oil as the commodity remains in a short-term downtrend. This follows on from a Dark Cloud Cover formation on the daily that helped foreshadowed a correction. Additionally, the rate of change indicator has grown more negative, signaling building downside momentum. While buying support near the 50% Fib Retracement level has slowed crude’s declines and may prompt a short-term bounce, an eventual extension towards $96.70 looks possible.

GOLD TECHNICAL ANALYSIS – The Gold bulls have continued their run with the uptrend remaining intact. Sellers sitting at the $1,392 mark may act to slow the precious metals ascent with additional resistance offered by the top of the rising trend channel. An upside breakout favors an extension to 1,416 (the September 2013 high) while a retracement is likely to find support at $1,375. 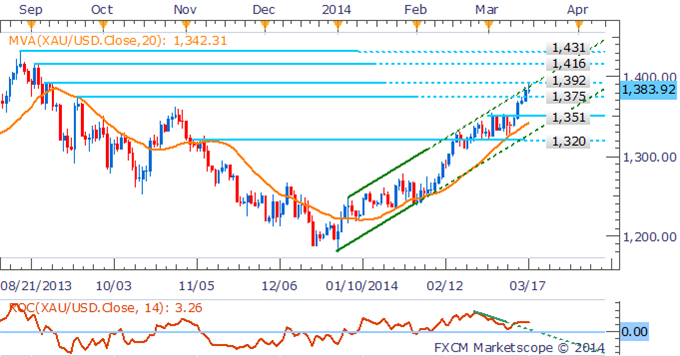 SILVER TECHNICAL ANALYSIS – Silver is showing signs of a shift to an uptrend, signaled by prices wavering around the 20 SMA and the ROC indicator becoming less negative. However, a bullish technical bias cannot be offered until a break above the critical $21.50 mark occurs. 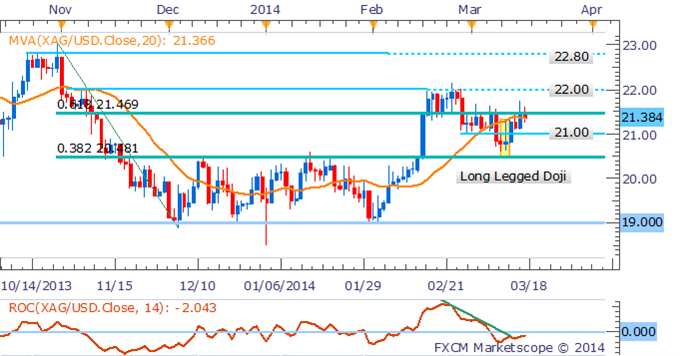 COPPER TECHNICAL ANALYSIS–While we retain a bearish technical bias for copper over the near-term, given the magnitude of the recent declines, chasing further falls may carry too much risk. As such new short entries are preferred on a corrective bounce to 3.00. Fresh declines may be met by buying support at the July 2010 low near 2.865. 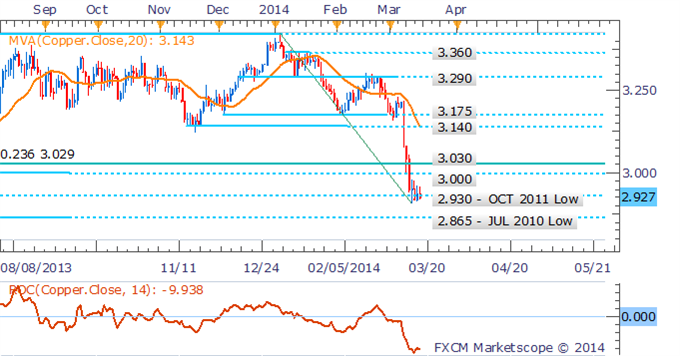