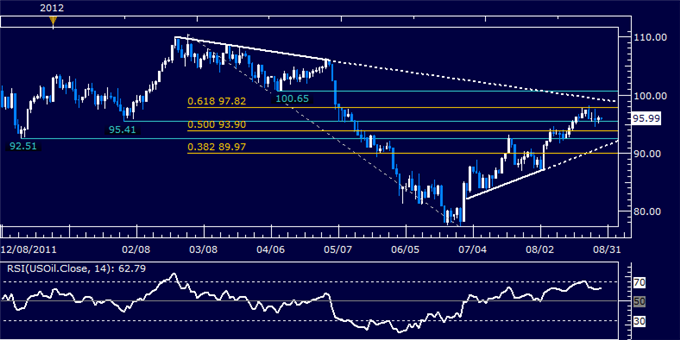 Commodity prices continue to consolidate near familiar technical barriers as traders wait for Friday’s much-anticipated speech from Fed Chairman Ben Bernanke at the Jackson Hole symposium. Traders hope the central bank chief will signal the intention of launching a third round of quantitative easing (QE3).

In the meantime, the focus is on the US economic calendar to set the stage for Friday’s main event. Revised second-quarter GDP figures as well as the Fed’s Beige Book regional economic survey are due to across the wires. Expectations see output revised slightly higher to show the economy added 1.7 percent compared with the originally reported 1.5 percent result.

Reinforcement by way of a firmer tone to the Beige Book may underscore the recent improvement in US economic data anddent easing expectations, weighing on risk appetite. This has scope to send sentiment-sensitive crude oil and copper prices lower, although in the case of the WTI contract news-flow surrounding Hurricane Isaac and its possible impact on Gulf refining capacity may overshadow risk trends. Such a scenario is likewise likely to punish gold and silver amid ebbing inflation-hedge demand.

Prices are consolidating between resistance at 97.82, the 61.8% Fibonacci retracement, and support at 95.41, the February 2 low. A break downward initially targets the 50% Fib at 93.90. Alternatively, a push higher through resistance exposes a falling trend line set from the late-February swing top, now at 99.09. 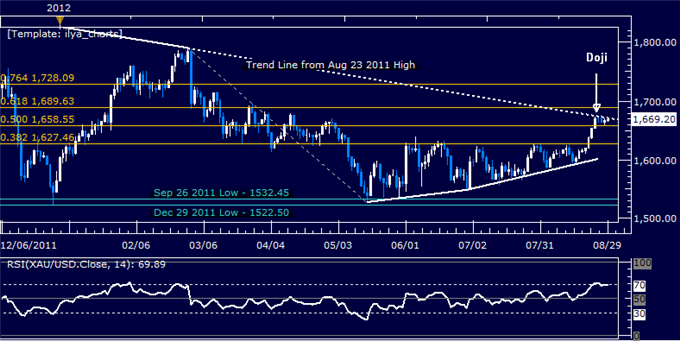 Prices continue to stall below trend-defining falling trend line resistance set from the late-April 2011 swing top (30.99). Near-term support lines up at 29.70. Alternatively, a break above resistance marks a significant reversal and initially exposes the 32.00 figure and a horizontal pivot at 32.93. 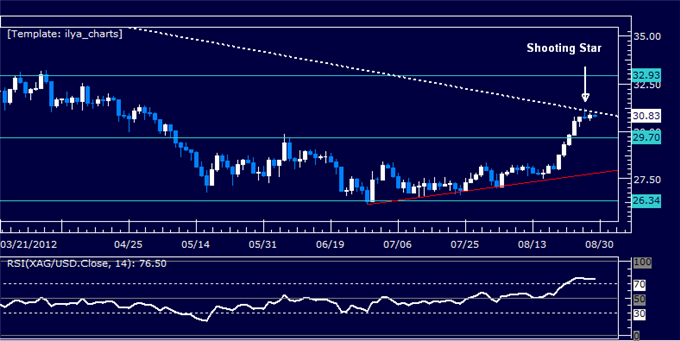 Prices are pulling back following a test of resistance at the top of a rising channel set from the August 2 low. Near-term support lines up at 3.442, with a break below that exposing the intersection of the channel bottom and a falling trend line set from the April 3 high (3.394). Channel resistance is now at 3.528, a hurdle reinforced by a range top at 3.535. A push above the latter level exposes 3.618. 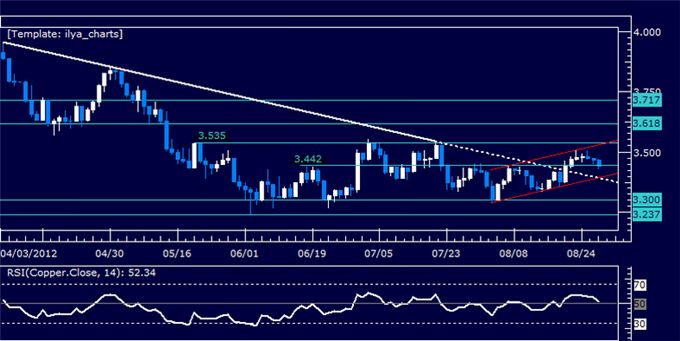