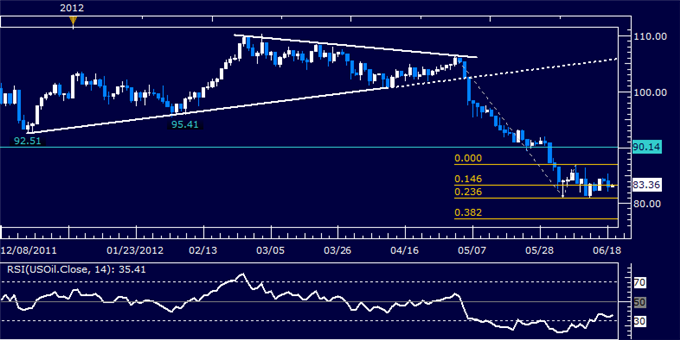 Commodity prices are sending mixed signals ahead of the opening bell on Wall Street, reflecting a notable departure from familiar trends. While European shares are edging higher, the typically sentiment-driven crude oil and copper are diverging to show modest losses instead.

The chipper mood follows reports that Greek political leaders are on the verge of cementing a ruling coalition and starting the process of reworking the terms of the EU/IMF bailout program. This arguably reinforces reduced fears of a sudden Greek exit from the Eurozone following the weekend’s general election. With that in mind, it is also curious to see gold prices higher considering the metal has recently traded as a store-of-value hedge against financial market dislocation.

On balance, the magnitude of overnight moves is modest at best, hinting that perhaps the temporary divergence is little more than consolidation before larger themes return in force. The possibility that commodities are offering an early sign of skepticism in the ability of a Greek accommodation to meaningfully defuse near-term sovereign risk jitters should not be dismissed however.

S&P 500 index futures are pointing higher for now, but given European-session price action it is unclear what that means for the commodity space in the near term. US Housing Starts and Building Permits data is on tap ahead, with small increases expected on both fronts. Sideline commentary from the G20 summit remains an important wildcard as world leaders focus their attention on Euro-area turmoil.

Unchanged from yesterday: “Prices are stalling after taking out a falling trend line set from early March. Near-term resistance remains at 1637.35, the 76.4%Fibonacci retracement, with a break above that exposing the May 1 high at 1671.49. The 61.8% Fib at 1616.23 has been recast as near-term support.” 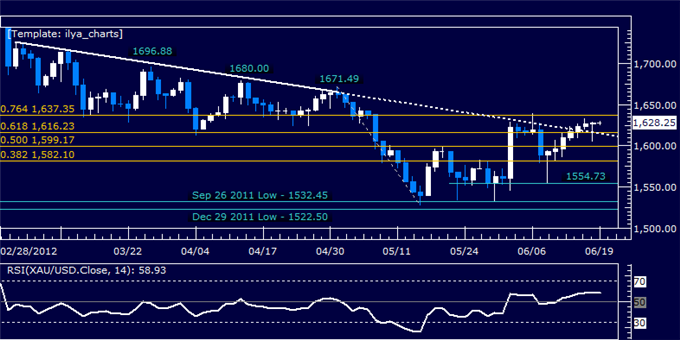 Prices continue to trace out a Flag chart formation, a setup indicative of bearish continuation. Confirmation is required on a daily close below the pattern’s bottom – now at 28.47 – which would expose 27.06 as the next downside objective. The first layer of major resistance lines up at 29.71. 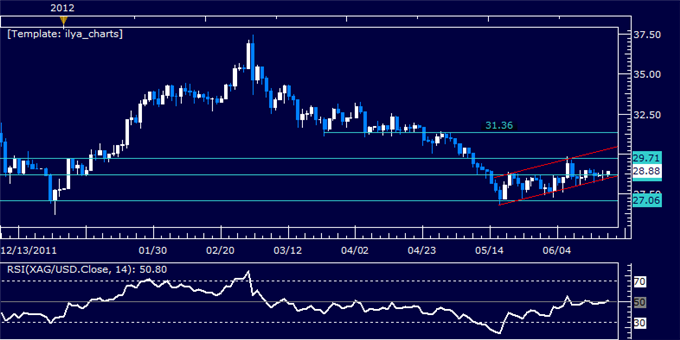 Prices took out resistance at 3.384, the 23.6% Fibonacci retracement, with the bulls now aiming to challenge the 38.2% Fib at 3.474. The 23.6%retracement has been recast as near-term support, with a break below that 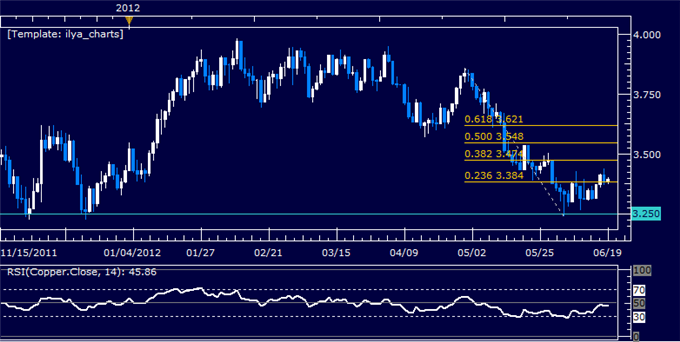