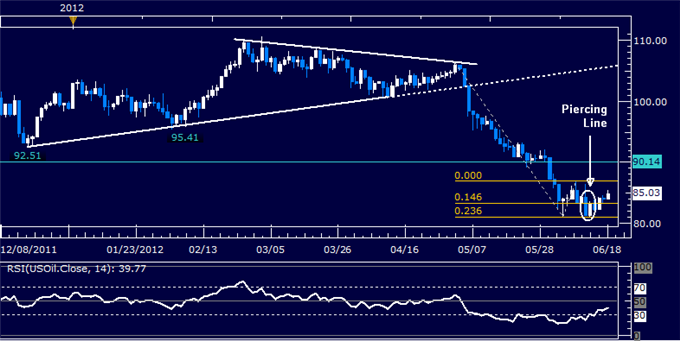 Growth-geared crude oil and copper prices are on the upswing amid a broad-based improvement in risk appetite after a general election in Greece over the weekend produced enough votes for the main pro-bailout New Democracy and Pasok parties to form a coalition government. The outcome downgraded fears of an imminent Greek exit from the Eurozone, boosting risk appetite and weighing on the go-to haven currencies. Investors feared a disorderly ejection of the country from the currency bloc may materialize if Syriza – a party pushing to renege on the terms of the EU/IMF bailout – were to emerge victorious.Gold is down as the result dents demand for the metal as a store-of-value haven. Silver is little changed.

S&P 500 stock index futures are pointing higher, suggesting the risk-on mood will probably carry forward at least in the immediate term. If last week’s Spanish bank bailout is to be repeated however, that could be mere hours. The election effectively returns markets to the status quo in place six weeks ago before the first attempt at installing a new government ended inconclusively. Now as then, the evolution of the Eurozone debt crisis appears likely to proceed as a slow simmer, not a sudden rupture triggered by a one-off event. The negative implications of a Eurozone slump for global economic growth have become no less significant, casting the recent recovery in risky assets as corrective in the context of a larger bearish dynamic still in play.

An empty European economic data docket leaves a French bond auction as the solitary piece of scheduled event risk on the calendar. Paris will sell €8.7 billion in bills up to 12 months in maturity. Traders will look to bid-to-cover and average yield readings to gauge Eurozone sovereign risk jitters. While the short tenor of the debt on offer would typically make for a lackluster response from price action, the proximity of the Greek election may amplify the results’ impact, which traders may treat as a referendum on the ability of the vote to meaningful relief. Sideline commentary from the G20 meeting getting underway in Mexico will also be sought out for guidance.

Prices are edging higher after putting in a bullish Piercing Line candlestick pattern above support at 81.07, the 23.6% Fibonacci expansion. The bulls now aim to challenge the June 7 high at the 87.00 figure. The 14.6% Fib at 83.30 has been recast as near-term support. 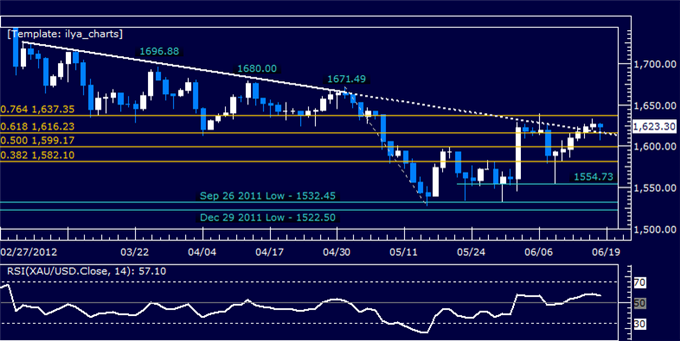 Prices continue to trace out a Flag chart formation, a setup indicative of bearish continuation. Confirmation is required on a daily close below the pattern’s bottom – now at 28.41 – which would expose 27.06 as the next downside objective. The first layer of major resistance lines up at 29.71. 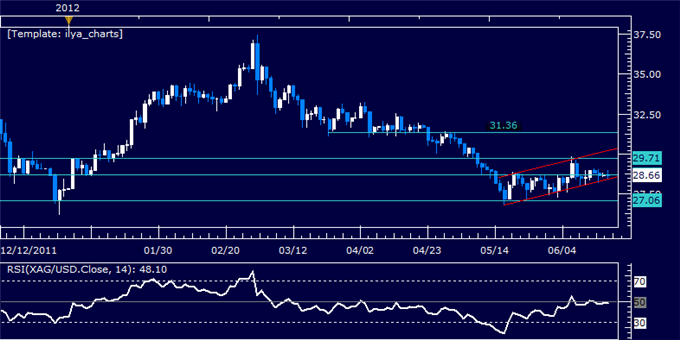 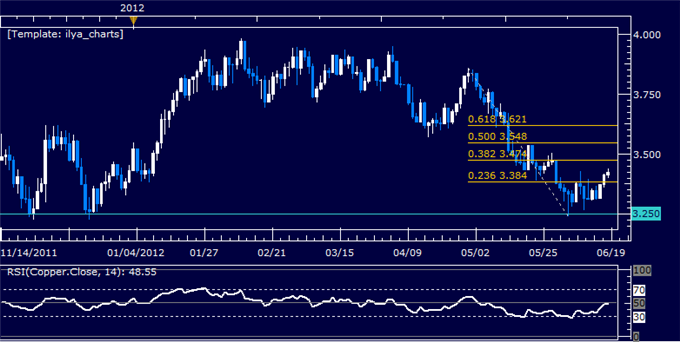