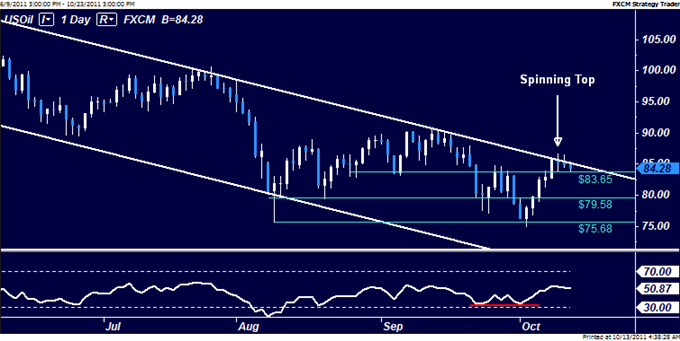 Crude oil remains anchored to broad-based risk sentiment trends, with prices continuing to show a strong correlation with the S&P 500. Futures tracking the benchmark equity index are pointing lower in overnight trade, hinting at the return of risk aversion and threatening to weigh on the WTI contact.

Sentiment is back on the defensive after European Central Bank poured cold water on hopes that a coherent solution to the EU debt crisis was starting to emerge. The central bank reminded traders of the dismal growth outlook for the region in the second half of the year and issued sharp criticism of policymakers’ plans for private-sector involvement in bailout efforts, saying such actions risk spreading contagion.

Looking ahead, US Trade Balance and jobless claims figures are in focus after a better-than-expected earnings report from JPMorgan Chase failed to prove supportive. The official set of weekly crude inventory figures is also on tap.

On the technical front, positioning is little changed from yesterday, with prices continuing to stall below resistance at the top of a falling channel set from early May after showing a bearish Spinning Top candlestick. The setup points to ebbing conviction behind bullish momentum and hints a reversal downward may be ahead. Initial support lines up at $83.65, with a break below that exposing $79.58.

Gold edged higher yesterday after minutes from the September’s Federal Reserve policy meeting showed some members of the rate-setting FOMC were in favor of a further expansion of the balance sheet, but countervailing arguments calling for a tamer approach than the “Operation Twist” outcome that was ultimately issued kept the tone of the release broadly balanced, robbing gold of a meaningful breakout higher. The apparent lack of urgency in calling for a QE3-type approach by its advocates likewise acted to restrain the yellow metal.

Looking ahead, the indirect effect of risk trends via the trajectory of the US Dollar is likely to return as the leading catalyst for gold prices. Indeed, with the monetary policy landscape effectively in place, the metal seems resigned to an anti-Dollar role for lack of other meaningful themes shaping the outlook. Needless to say, this means the metal is likely to find itself moving with risky assets, falling in the event that a return to risk aversion boosts the safe-haven greenback and makes it de-facto cheaper in terms of the benchmark currency (and vice versa).

The technical picture has remained effectively unchanged for the past two weeks. Prices remain locked in a choppy range between the 14.6% and 38.2% Fibonacci retracements at 1589.14 and 1680.78 respectively. A break below immediate support exposes the September 26 low at 1532.45. Alternatively, a push higher through the range top exposes the 50% Fib at 1726.60. 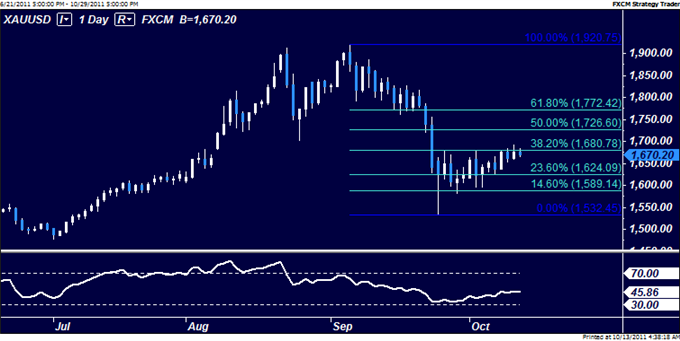 As with gold, silver managed a shallow advance yesterday in the aftermath of the FOMC minutes release but failed to secure a meaningful breakout. Prices continue to tread water above resistance-turned-support at $30.98, the 14.6% Fibonacci extension level, with the next upside barrier marked by the September 27 high at $33.51. Alternatively, a break of support exposes the 23.6% Fib at $29.42. 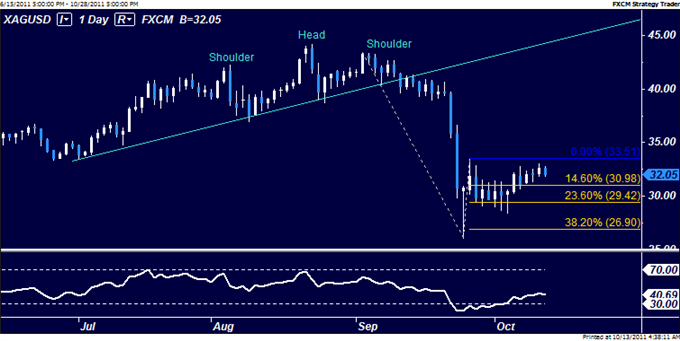