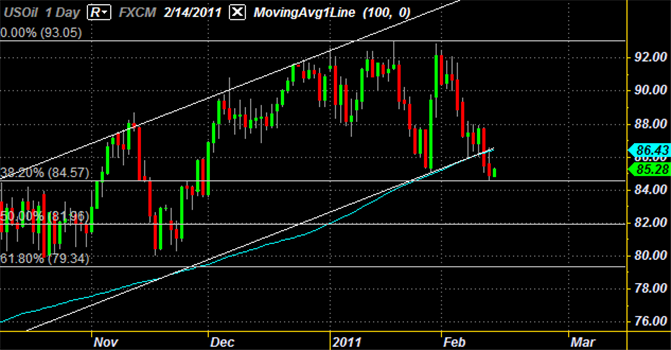 The positive momentum in financial markets continues to be relentless, as U.S. equities and commodities reach multi-month or all-time highs. Copper hit a new record, while the S&P 500 hit a 31-month high. For oil in particular, unrest in the Middle East and Africa remains supportive. Protests in Iran were the latest development, as spillover from the successful toppling of Mubarak in Egypt fuels democracy hopes across the broader region.

Meanwhile, interest rates remain relatively well-behaved. With rates in the developed world below 4% on the long end, markets are signaling that inflation isn’t a concern at this time. Easy monetary conditions and robust global growth is the perfect combination for continued gains in commodities in general, and oil in particular. That being said, we would not be chasing this move, and would look for a pullback before deploying any capital into these markets.

Technical Outlook: As would be expected from a major trendline break, a retest of former support as new resistance takes oil one step closer to a pivotal and lasting reversal. Monday’s intraday bounce is too be expected; and it isn’t a coincidence that the high would coincide with the former channel floor and 100-day simple moving average. That said, momentum is the next critical ingredient for follow through on a bearish wave. And, to ensure that this is not an easy move, the fresh two-month low still faces the 38.2 percent Fib retracement of the August to January bull wave.

Commentary: Gold rebounded on Monday, rising by $4.80, or 0.35%, to settle at $1361.85. The metal has been holding up extremely well in the face of a notable decline in ETF holdings and a distinct lack of catalysts. While monetary policy is generally loose, economic activity is picking up, signaling that these unprecedented conditions will soon be a thing of the past. Market-based indicators are suggesting that major central banks will hike rates multiple times over the next twelve months, which would be bearish for gold all else equal.

Technical Outlook: Gold is still chopping through congestion set just below the confluence of its 50-day simple moving average, the 50 percent Fib retracement on the January bear wave and former neckline from three-month head-and-shoulders pattern. We still need a trigger for a bullish surge or collapse; and the rising wedge formation from the past three weeks may provide the necessary push. 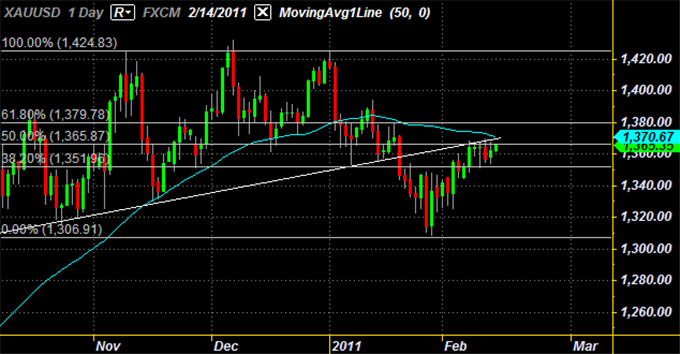 Commentary: Silver surged higher by $0.70, or 2.35%, to settle at $30.62. The metal once again outperformed gold, as the pickup in industrial demand disproportionately benefits silver.

Technical Outlook: Silver’s rebound is ongoing. A surge Monday would clearly diverge from the day’s performance seen in gold and other risk-based asset classes. Though this was only the largest rally since last Tuesday, the progress has put the metal well above the December 7th swing high. Any argument that this is a right-shoulder on a head-and-shoulders patter is quickly fading. At this pace, the metal will post a new three-decade high by Tuesday or Wednesday’s close. 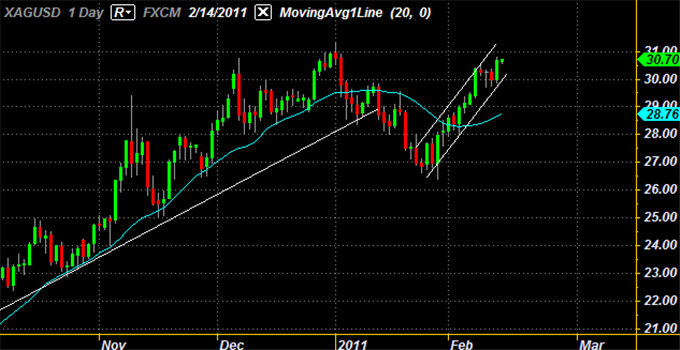