The Reserve Bank of New Zealand (RBNZ) is on deck to provide markets with its latest interest rate decision on Wednesday at 2:00 GMT, which brings kiwi currency pairs into focus. Spot NZDUSD has begun to rebound off its weakest level since September 2015 as forex market participants speculate over whether the central bank will opt for a firmer monetary policy stance following its recent dovish action. Last month, the RBNZ caught traders off-guard after Governor Orr and the Monetary Policy Committee (MPC) slashed the benchmark overnight cash rate (OCR) by 50-basis points in a more aggressive move than the expected 0.25% rate cut.

The August RBNZ monetary policy statement noted that “a material pickup in GDP growth is necessary for inflation to increase to 2% and for employment to remain around its maximum sustainable level, and more stimulatory monetary policy is needed to support this pickup.” The RBNZ further highlighted “inflation and employment are likely to be below their targets over the medium term without additional stimulus,” adding that “a lower OCR is necessary to achieve our objectives. 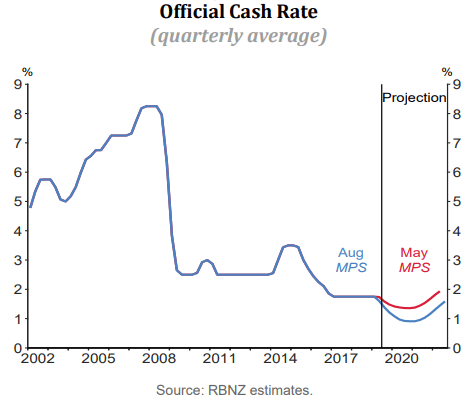 Although, the central bank’s updated projection for its policy interest rate appears to have accounted for last month’s 0.50% cut with 2020 OCR estimates sitting right at the current 1.00% level. This could explain the rebound in spot NZDUSD and other kiwi-crosses as markets could be expecting the RBNZ to stay sidelined going forward in lieu of making more dovish adjustments to the OCR. 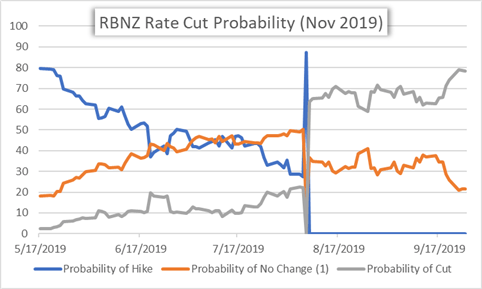 According to overnight swaps data pulled from Bloomberg, however, rate traders are pricing in roughly an 80% probability that the RBNZ will cut the OCR by another 25-basis points by the central bank’s final meeting of the year. Consequently, the New Zealand Dollar could be in store for heightened volatility over the short and medium terms as market expectations converge with monetary policy outlook from the RBNZ.

RBNZ monetary policy uncertainty has sent overnight NZDUSD implied volatility skyrocketing to 14.13%, which is significantly above its average of 7.85% and ranks in the top 95th percentile of readings over the last 12-months. I noted the potential for heightened price action in spot NZDUSD in my previous US Dollar implied volatility report, which is published daily. Second to the particularly interest rate sensitive JPY crosses, GBPNZD is expected to be the most volatile New Zealand Dollar currency pair during Wednesday’s trading session and could tee up GBPNZD for a big move in light of ongoing Brexit uncertainty and looming RBNZ monetary policy decisions. 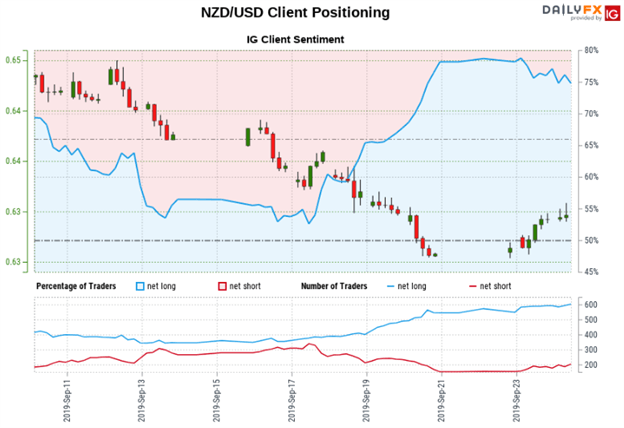 According to the latest IG Client Sentiment data, 76.77% of retail forex traders are net-long spot NZDUSD resulting in a long-to-short ratio of 3.30 to 1. Moreover, compared to last week’s figures, the number of traders net-long is 60.42% higher whereas the number of traders net-short is 45.88% lower. Seeing that we typically take a contrarian view to crowd sentiment, and the fact that traders are increasingly net-long suggests that spot NZDUSD prices may continue to fall.