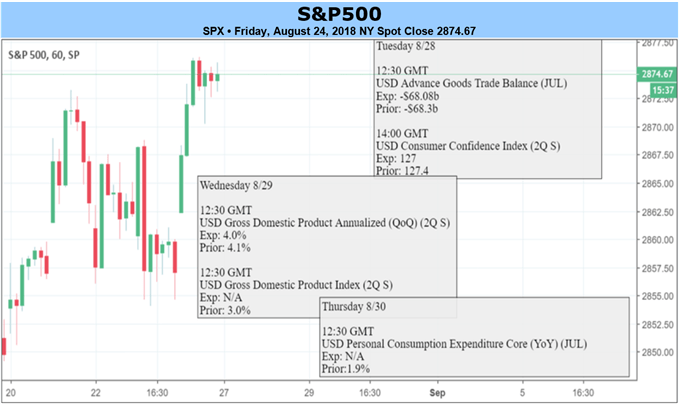 This past week the FOMC minutes revealed little to move markets on Wednesday, and on Friday Fed Chair Powell didn’t say anything earth-shattering at Jackson Hole, but did spark a little intra-day volatility. Trade War headlines for the week were relatively benign, but will continue to remain an ever present threat for the foreseeable future. We have a few ‘high’ impact data releases on the docket; Tuesday brings Trade Balance and Consumer Confidence data, GDP on Wednesday, and Core PCE on Thursday. For release times and details, check out the economic calendar.

With the S&P 500 traversing in record territory and not having a clear-cut price sequence in place, we’ve been turning to the Dow and Nasdaq 100 for cues. The Dow is posting a reverse symmetrical triangle while ironically the Nasdaq 100 is carving out a regular symmetrical triangle, and despite this perhaps sounding strange, the outcome of the mirror image patterns could be the same. Right now, looking bullish. For more on these patterns check out the Dow piece from Wednesday and Nasdaq 100 post from Friday. 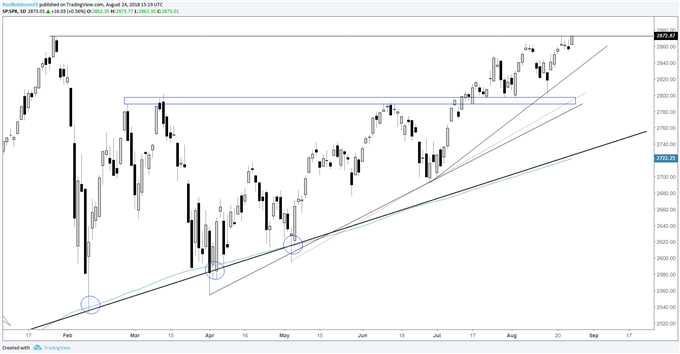 Looking ahead to next week, we have German unemployment and CPI figures due out on Thursday, followed by Euro-zone CPI on Friday. Keep an eye on risk trends and whether the broken inverse correlation to the euro can come back into play at some point.

The DAX remains a weak spot in major global markets. It’s doing its best to recapture the broken February 2016 trend-line, and with some more risk-taking in the U.S. it may do-so. For now, using a turn down and drop below 12104 as the line-in-sand for turning outright bearish, otherwise the U.S. indices are favored for longs.

Next week’s calendar holds no ‘high’ impact data releases to speak of. As evidenced by the price action in the FTSE, there hasn’t been a clear dominating fundamental theme driving stocks. It is one of the more difficult handles out there at this time.

The technical posturing of the FTSE is, in a word, a mess. Choppy price action is dominating trade and making it difficult to decide on which direction it could head. This usually means either take a mean reversion (range-trading) approach or do nothing until better clarity. If we see markets take cues from strong U.S. markets then the footsie will likely drift higher.