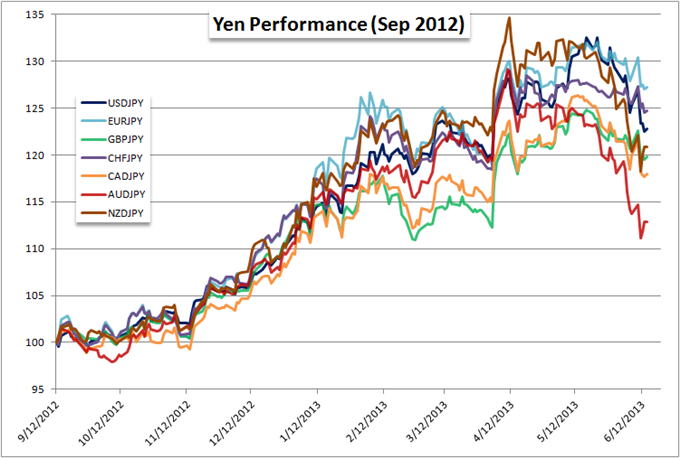 In a span of little over seven months, the Japanese yen plunged between 22 and 33 percent against its most liquid counterparts. That is an incredible pace for the deep end of the FX pool. While the yen could be argued to be overbought after hitting a record high late in 2011 and refusing to significantly depreciate from that general level, there was clearly more to the September 2012 to May 2013 run up than a simple shift in speculative interests. That provocative catalyst was stimulus.

During the fallout of the ‘Great Recession’ and concurrent global financial crisis, central banks moved in to stabilize the system. From there, the massive liquidity programs increased as the objective shifted to support economic recovery. Years, down the line, the growth goal seems to have evolved into a ‘wealth creation’ aim. And, the Federal Reserve (Fed) used the effort to considerable effect. Stable markets, slow but consistent growth and soaring capital markets drew central bank envy. Eventually, Japan – pressured by volatile economic swings, persistent deflation and long-term demographic problems – decided to follow in the US authority’s footsteps.

Though they have vowed that their intention is to end a long bout of deflation, the Bank of Japan adopted an open ended stimulus program – similar to the Fed’s QE3 – that has had the added benefit of devaluing the Japanese yen. This is a favorable outcome in many ways and not least for making Japanese-made goods cheaper on a global basis. This move was certainly not a surprise though.

Officials began a campaign to threaten the currency lower starting with new Prime Minister Shinzo Abe moving to then-BoJ Governor Shirakawa and eventually taken up by current BoJ Governor Kuroda. In the chart below, we see the incredible climb in the yen-based crosses (depreciation of the yen as it is the second currency in the pairing) since mid-September. This is a move that began well before serious policies were actually implemented. The market is forward looking and prices in expected outcomes.

A ‘front-run’ of serious policy changes proved extremely effective – though both the Japanese government and central bank have stated currency depreciation is not the aim of their guidance / policy since the G7 and G20 issued a statement warning countries against competitive devaluation (a technical term that essentially equates to ‘currency war’).

Yet, the market’s own expectations may have overreached what could reasonably be achieved by actual policy that would be limit bound. We can see this in the chart below. In this graph, we see the relative performance of USDJPY and all other yen crosses since April 4 when the BoJ introduced the unprecedented move to increase its monetary base by ¥60-70 trillion a year through regular purchases of ETFs, Japanese-REITS and Japanese Government Bonds (JGBs). While the yen did receive another solid push lower (yen crosses higher) immediately afterwards, the commitment started to taper. 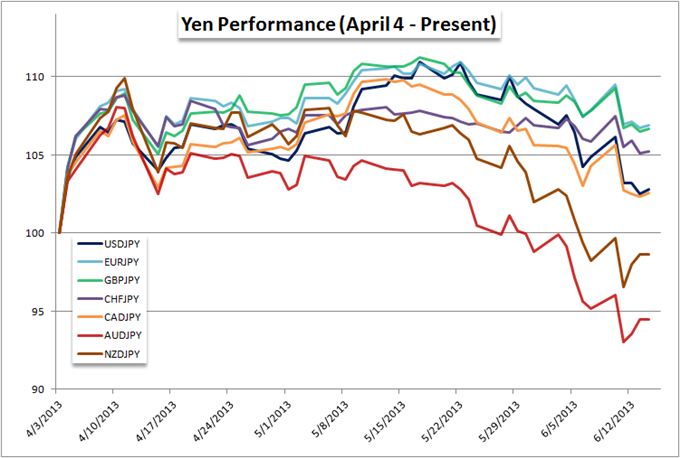 Doubt has started to creep into the market. Investors are aware of the Bank of Japan’s plans to remain a considerable presence in the market with asset purchases that are aimed to promote asset appreciation, devalue the yen and temper volatility. Yet, the central bank is fighting an uphill battle. There are a number of systemic issues that make the BoJ situation much more complicated than the Fed’s. Chief among them is the specter of a general risk aversion move from global capital markets.

If fear edges into the market’s psyche, the leveraged carry trade in Forex will be one of the biggest victims. In the graph below, we see the AUDJPY exchange rate (with the highest carry of the liquid yen crosses) versus the short-term yield it provides. The ‘return’ on the trade has significantly diverged from prevailing price levels. 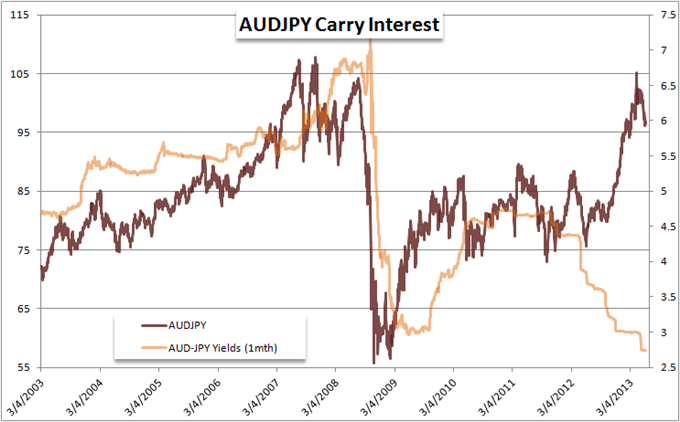 Risk aversion has proven exceptionally difficult to stoke in the global financial markets, but the incredible threat is presents necessitates preparation. In the event of such a shift, there are more than a few near-term, long yen setups that look exposed (use Mirror Trader to trade a yen basket– long or short). First, we have USDJPY which has finally slipped below its 100-day moving average this week and is now facing a noteworthy trendline and long-term 38.2 percent Fibonacci retracement. 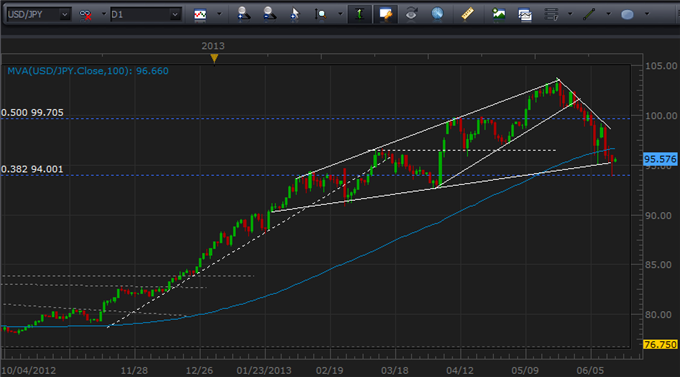 Another stand out is EURJPY which has tempted its own collective support at 126.50 before making a dramatic effort to keep on the bullish side of the floor. But, a simple assessment of current conditions, we can see in the graph below that momentum has already overheated. The pair has spent 202 consecutive trading days above its 100-day moving average. In the past decade, only a 206-day run through March 1, 2007 can match that incredible pace. 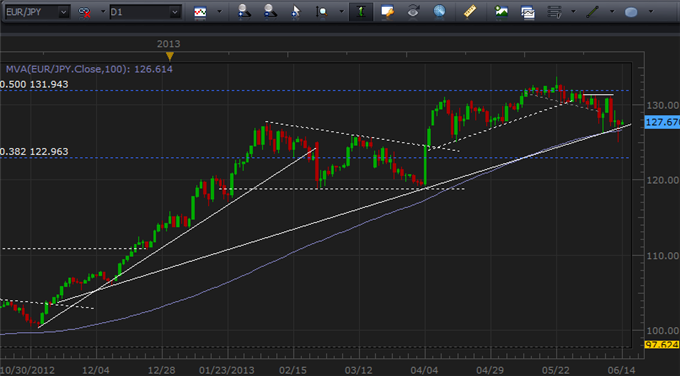 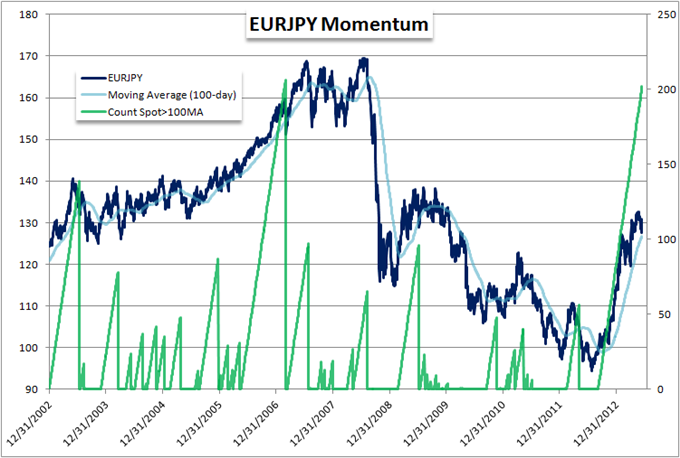 How Technical Levels Will Develop In Q2 of 2022
Advertisement