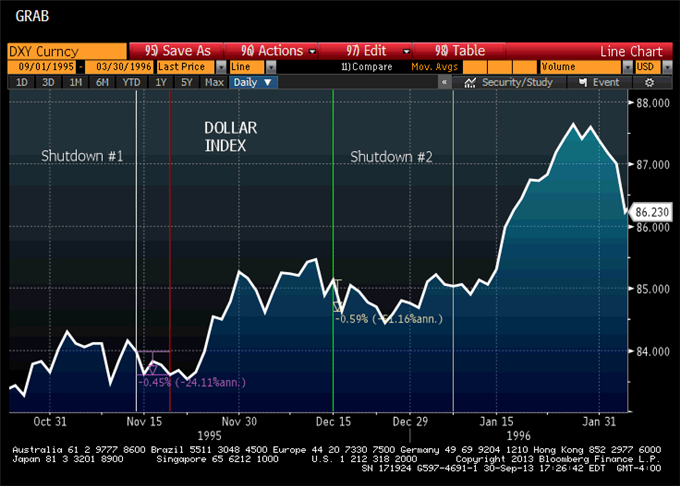 Despite Shutdown, Disaster Is Still 16 Days Away

Although Congress failed to compromise in time to avoid a government shutdown, the dollar impact is likely to be modest unless no deal is done before a first-ever US debt default on or before October 17.

Unless members of Congress suddenly shift their tone and put political differences aside, large sections of the US government will be shut down before the Tuesday open. Many have been holding out hope that there would be a last-minute compromise, but there has been absolutely no progress on the budget negotiations.

The Senate swiftly rejected the spending bill submitted by the House and returned a version that strips out a one-year delay to the controversial Affordable Health Care Act. The proposal of a one-week temporary stop-gap measure was also quickly rejected by Republicans, who said "it doesn't make any progress in the right direction."

In other words, we are right back where we started before the weekend, and at this stage, we have to consider how the US dollar (USD) will react to the first government shutdown in 17 years. While the looming shutdown weighed on US equities on Monday, there has been only a limited selloff in the greenback.

The dollar index lost more than 2% of its value since the beginning of September in anticipation of the dysfunction in Washington, but with the October 1 deadline now here, the pressure on politicians to compromise will only intensify.

As shown in the chart of the dollar index below, the last time the US government was shut down, the dollar dropped only 0.5% and recovered quickly thereafter. Similar price action can be seen in USDJPY, which leads us to believe that while the dollar will most likely extend its losses tomorrow, the selloff should be limited.

Guest Commentary: Can the Dollar Weather the Shutdown?

According to Treasury Secretary Jack Lew, the US government will reach its debt limit no later than October 17, and the US will effectively default on its loans for the first time ever if the debt ceiling is not increased by that date. The consequences of a default would border on catastrophic, and Republicans and Democrats are both keenly aware of the risks. Now, even if a shutdown occurs, Congress has another 16 days to compromise, and we firmly believe that they will at least pass a temporary measure to fund the government for a few more months.