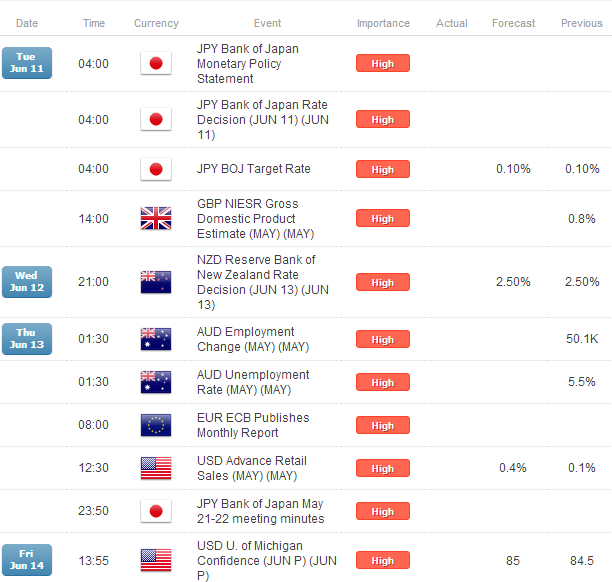 The Dow Jones FXCM Dollar Index (Ticker: USDOLLAR) is bouncing off its May 29 low of 10517 in light of Friday’s good NFP data. While this week was focused on the USD, some of that focus will shift next week to other majors with both the BOJ and RBNZ announcing rate decisions. Investors should carefully watch Tuesday’s BOJ decision and observe Governor Kuroda’s rhetoric regarding further easing, the strengthening of the yen, the rapid decline in the Nikkei and Japanese Government Bond markets.

The Bank of Japan (BOJ) will give important clues as to the direction of Japanese monetary policy in the face of investor doubt over the viability of “Abenomics”. On Wednesday June 5, investors were unimpressed by Japanese Prime Minister Shinzo Abe’s plans for further easing, which focused on business deregulation. Attention now turns to Bank of Japan Governor Kuroda, who will need to calm bond and currency markets; 10YR Japanese Government Bond (JGB) yields reached 0.933% on May 29, more than double their yearly low of 0.446% (April 4). The Yen has likewise strengthened by as much as 7 percent since the BOJ’s May 21 meeting. The stage is set for potentially big JPY moves.

The Reserve Bank of New Zealand (RBNZ) is expected to keep benchmark rates steady at a record low 2.50% as the economy remains stagnant – much like the rest of the world. On May 30, RBNZ Gov. Graeme Wheeler stated that the kiwi was “significantly overvalued” (NZDUSD was trading around .8080 at the time). In the last month, the NZD had the second worst performance out of all the majors (-6.5% at the time of writing), only outpaced by AUD (-6.9% at the time of writing). The RBNZ will keep a close eye on AUDNZD as well and NZ favors a strong AUDNZD rate to support exports.

Australian May employment numbers will provide a barometer for the Australian economy, with Bloomberg News survey expecting a contraction of 10K. Global markets have been lethargic as of late and more concerns surface around China, Australia’s main trade partner. The important mining sector in Australia has been continually slowing and commodities have been performing poorly in the last few months. Although the overall sentiment is negative, investors should be cautious that the upside risk – should the employment numbers beat estimates—will result in larger upside risk than the corresponding downside risk should the numbers miss due to the plethora of existing short AUD positions.

US Advance Retail Sales (MAY) will provide a timely indication on the important consumer spending aspect of the US economy. The US reported a slew of mixed economic data this week with ISM Manufacturing data showing a contraction (actual: 49.0; expected: 50.7 according to Bloomberg News survey). The most important release nonetheless beat expectations as Friday’s Nonfarm Payrolls data showed a +175K increase in jobs versus the Bloomberg News survey expected +165K figure. The USD quickly strengthened against most currency pairs following this report and the Dollar Index bounced off Thursday’s low of 10517 to 10648 (+1.24%) at the time of writing. US Advance Retail Sales figures may add further color on the strength of the US economy and help decide the Dollar’s fate.

Friday’s U. of Michigan Consumer Confidence report will add flavor to the state of the US consumer, being released one day after US Advance Retail Sales report. The figure is expected to remain at May’s 84.5 reading. Markets are currently skeptical regarding US consumerism; the SPDR Consumer Discretionary ETF (Ticker: XLY) has declined 0.66% in the last month at the time of writing. If both Thursday’s and Friday’s consumer data report well, the USD should strengthen. However, investors should be prudent about drawing conclusions on QE tapering just based off of Thursday and Friday’s data prints.