Most Expensive Currency - Buy or Sell?

Article Summary: A Forex trading tip we often talk about is buying strength and selling weakness. The Norwegian Krone has continued to hold strong amidst this recent rise of the EUR. Look for opportunities to buy weakness in the NOK.

When faced with the choice of purchasing an expensive product, do you buy it or look for a cheaper alternative? People buy expensive products all of the time for a variety of reasons. Trading currencies is no different. This article will share with you what is considered to be one of the most expensive currencies from a valuation perspective, the Norwegian Krone (NOK) and how you can trade it. 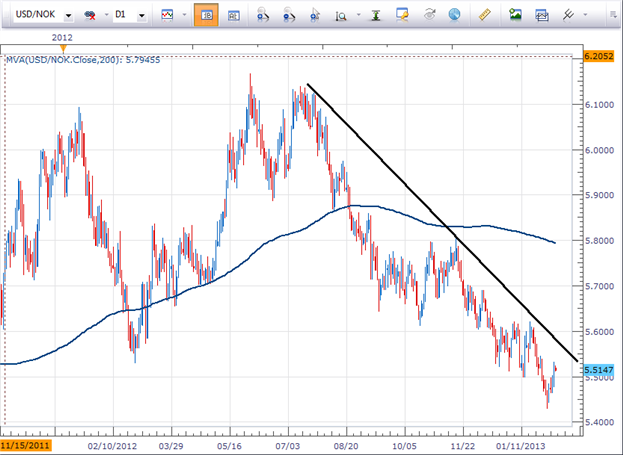 Recently, the NOK has made headlines because both The Economists’ Big Mac index and the Organization for Economic Co-operation and Development cited it as being one of the most over-valued currencies. The Big Mac Index is meant to be an easy to understand currency comparison by simply comparing the retail cost of a McDonald’s Big Mac in various parts of the world. The logic is that a Big Mac should have a stable relative value and any differences are likely the result of changes to the exchange rate between the two countries.

The Big Mac Index is not the only source calling the NOK overvalued. A recent Bloomberg article (“Krone Gains Provokes Norway Policy Response to Preserve Jobs”) mentions the OCED recently gauged the NOK as being 40% over-valued. Some reasons are spelled out clearly in the article.

Norway has benefited as being perceived a safe haven in the middle of an on-going European Sovereign Debt Crisis. This has caused capital to flee debt laden countries and move towards a currency that is geographically nearby and perceived to be more stable. Additionally, Norway is a rich nation that is producing what the rest of the world wants in oil and oil resources.

This has produced a vibrant economy that is at risk of over-heating. The Norges Bank (the central bank of Norway) has begun to talk down and push out further the possibility of a rate increase. They know the action of raising the target interest rate will likely increase the strength of their currency even more. Therefore, the Norges Bank has decided to call an audible on the battlefield of a currency war to help tether their currency’s strength.

Although this sounds on the outside to be NOK negative, when compared to other fiat currencies, the NOK continues to shine.

One of the things our traders hear regularly from the team at DailyFX EDU is to identify a strong currency and a weak currency and marry them together as your chosen market to trade. Once the pair is identified, trade the pair where you are buying strength and selling weakness.

Well, the Euro has shown tremendous strength over the past 6 months. For example, the EURUSD has gained nearly 1100 pips since August 2012. Additionally, this Euro strength has been broad based as it has increased against all of the other main currencies for the past 6 months…except for the NOK.

So when you see a broad based rally like we have in the Euro and witness that it is not making headway against the NOK, then obviously this means the NOK is just a little bit stronger. Buy strength.

The question then becomes, which currency do I sell when buying the NOK? A weak JPY certainly makes sense. However, you can also use your view of the EURUSD to guide you in your trade.

For example, if you feel the EURUSD exchange rate will continue to rise, then buy the NOK against the weaker USD (this means selling the USDNOK pair). 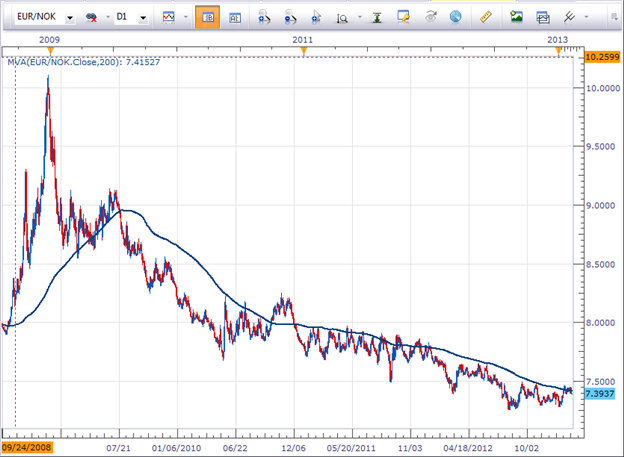 If the feel the EURUSD will fall as a result of the Sovereign Debt Crisis flaring up, then buy the NOK against a weaker EUR (this means selling the EURNOK pair).

All three instruments are available to trade at FXCM (NOKJPY, EURNOK, and USDNOK). To check out current prices and roll over rates, open a demo account and try trading them with virtual funds.

Want to learn about trading with Fibonacci? Register for this free Fibonacci course that will take about 20 minutes to complete.