What Volume & Sentiment Say About AUDJPY Near 18-Month Lows

-AUDJPY is Ground Zero for Risk Sentiment in the FX Market

AUDJPY is grounded zero for risk sentiment and the Forex market. Each currency in the pair displays one emotional view polar opposite to the other. The Australian dollar is heavily bid in times of economic growth and expansion where interest rates are on the rise and traders are seeking and buying higher yielding currencies while selling lower yielding currencies in a classic carry trade play.

On the other side of the spectrum, the Japanese Yen is the secular risk off currency. Because of the low interest rates held by the Bank of Japan, the Japanese Yen is often sold when risk sentiment is on the rise in order to seek greener pastures and higher yields. However, when the global risk tree shaken so that many of the speculators fall out, the yen is often forcefully bought back causing sharp moves higher. When the yen strengthens, rarely are the headlines on DailyFX going to make you feel good about the near-term economic future.

For these reasons above, it is important to know the direction of AUDJPY. If AUDJPY is heading higher, there are often ripple effects in other markets of risk taking at expanding rates. If AUDJPY is moving lower, and when it does it is often aggressive, there are often ripple of facts and other markets of profit-seeking capital being taken off the table in order to preserve that capital from dropping further.

What Volume and Sentiment Say About AUDJPY

Have you heard of the phrase,’ sell in May and go away’? It appears that AUDJPY have and did. Looking at a daily chart over the last three months, AUDJPY pushed higher from early February to May before falling aggressively by 800 pips over the summer with the potential to keep pushing lower. Should this continue, this would spell out a dire warning for risk sentiment in FX and other markets.

As you can see above, AUDJPY has moved aggressively lower with two gaps highlighted on the chart above marking key resistance in a downtrend. Additionally significant, you can notice that the gaps developed on a relatively high volume. High volume in a move with the trend shows market endorsement of the move and the continuation in the direction of the breakout with high volume is likely.

Secondly, at the top of the chart, you’ll notice the speculative sentiment Index reading of AUDJPY of +2.697. This reading shows a strong majority, nearly 75% of retail open positions are buying and fighting this trend. We use our SSI as a contrarian indicator to price action, and the fact that the majority of traders are long gives signal that the AUDJPY may continue lower.

The combination of volume and sentiment favor further downside. As a contrarian indicator, speculative sentiment Index shows retail traders are fighting this trend and have been doing so unsuccessfully over the summer. From a volume perspective, momentum and endorsement of the move lower is gaining steam. Now, let’s add technical analysis to the picture to round up our view.

When considering technical analysis, AUDJPY is showing extreme weakness by recently pushing 2014 lows. The sharp falling blue channel on the right has framed a majority of price action since the June 2014 lower high and ADJPY. This channel has taken us below the corrective rising channel labeled on the chart above, and the break along with volume and sentiment mentioned earlier, favor further downside.

Another tool, Fibonacci ratio analysis, provides targets based on prior moves. The sharp, five-month move in AUDJPY in 2013 will likely influence the drop or seeing from the 2014 top to whatever low we’re working on now. If the moves are similar, this current move would have another 660 pips to the downside taking us from 90.432 around 83.80. Of course, there’ll be retracements and confusion along the way but as long as the price stays within the falling blue channel and lower highs continue, downside targets will be preferred over a reversal.

Lower highs in a downtrend are very helpful for managing risk. The recent lower high in early July of 92.45 can act as a short term invalidation of eminent downside. As you can see in the chart above, the highlighted rectangle shows a thick zone of support that may be difficult to break. Bounces often happen near prior extremes and if you’re trading a market that has bounced near a prior extreme, be on the watch out for reversal.

Currently,The RBNZ loosened two of last year's four hikes, and it says further easing is probable. The growth outlook has deteriorated since June. Fundamentally, this will likely add to the ~16% decline we’ve recently seen.

Alternative Scenario: If the July 15th high on AUDJPY is taken out, watch for JPY to be a better sell against some of the stronger currencies such as GBP, USD, or NZD. A positive surprise to the global growth picture could bring this move into picture. Currently, this seems improbable. 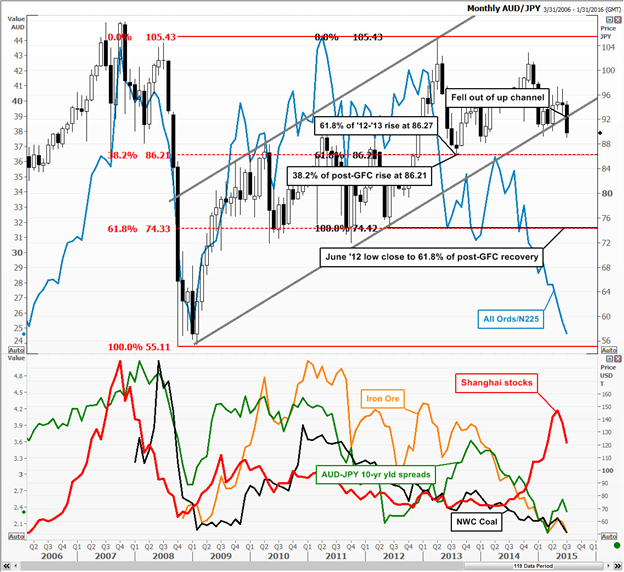 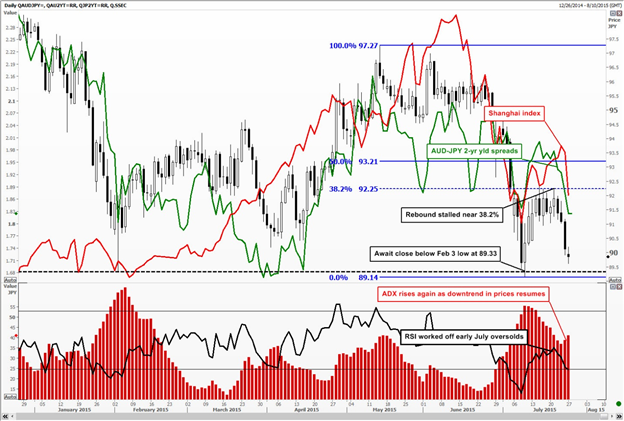 Despite Japan's massive QE program, AUD/JPY is threatening to test a crucial 2013 low and long-term Fibo supports at 86.21/27/36. Successively lower peaks in the wake of the 2007 high served as preludes to the current move. Fundamentally, countries such as Australia have suffered from the relentless fall in commodities that accompanied China's economic rebalancing. Demand for raw materials has dwindled in the process, as China's services sector overtook its manufacturing. Japan, on the other hand, benefits from cheap commodity import prices that offset the yen's weakness. A daily close below the Feb 3 and 2015 low at 89.33 should trigger the crucial support test at 86.21-36. A monthly close below 86.21 would target the low 74.00s