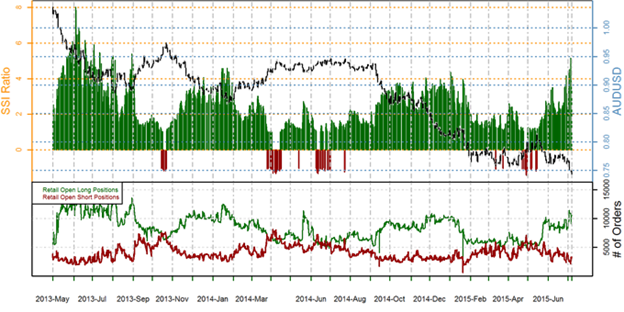 Financial markets are subject to ripple effects from other markets. Specifically, when fear or risk-off sentiment hits one market, another market will often act in a similar manner. Recently, China’s Shanghai Index has seen a 29% drop from mid-June highs nearly taking it negative for the year and hurting regional sentiment.

However, in addition to China there is also risk-off sentiment due to concerns over Greece’s potential exit from the Eurozone and hard assets, such as Oil moving aggressively lower. Earlier today, the Thomson Reuters CRB Commodity Equity Index hit a 5-year low today. This risk-off environment has created a sell-off in AUDUSD. Thankfully, we can look to volume & sentiment to see what developed behind price as well as look to other correlated markets and technical analysis to see what is developing in light of the uncertainty to see what opportunities may develop.

As you see from the picture above, Retail FX traders have aggressively and unsuccessfully fought this downtrend. This fight has taken place as AUDUSD continued lower. Sentiment favors further downside as you can see when the client positioning is heavily leaning one direction, it often aligns with a strong trend that they’re hoping is about to reverse. Additionally, you can see that Retail Open Long Positions have increased and are at their greatest exposure since the market peaked in spring of 2014.

The changes in long and shorts show additionally that the long view is getting more aggressive. The increase inretail long positions are 23.7% above levels seen last week showing the fight is only accelerating. SSI is used at DailyFX as a contrarian indicator to price action, and the fact that the majority of traders are long gives hints that AUDUSD may continue lower.Combining current sentiment with recent changes gives a further bearish trading bias.To see whether or not it’s time join, we can combine additional forms of analysis with Volume & Technical analysis. It’s been said that mobs do not think, and that view is validated by the aggressive fight of this multi-year trend.

Volume is shown at FXCM via blue bars on the bottom of the chart. The higher the bar, the greater the volume transacted. The lower the bar, the lower the volume transacted and the less trustworthy a move is treated. You can see below that the recent break of support shown by white lines attracted a relatively large amount of volume. With an increasing amount of support or multitude of buyers, a sustained move below that 4-month support of 0.7550/0.7600 could develop.

This is where AUDUSD Technical Analysiscomes in handy.When a tested level of support breaks, stops are often cleared out. Technical analysis looks to other forms of evidence to back up a trade idea. A wedge break is one sign of weakness. Additional forms of weaknessesare shown via the RSI on the Weekly chart below. RSI shows maintaining a bearish bias with no signs of divergence as price trades within a large falling channel. An inability to break out of this long-term bearish pattern would favor a run to the ~0.7200 area highlighted on the chart.

Additional forms of technical bearishness and correlations are through Ichimoku and the AU US yield spread. The chart above shows price moving aggressively through the Ichimoku Cloud with momentum, visualized by the green line, following suit. In terms of apositively correlated market, the 2yr yield spread between AU & US debt shows a consistent decline. A Decline in the yield spread has been correlated with AUDUSD weakness.

AUDUSD has broken significant support in the 0.7550-0.7600 zone. This break of support has aligned with increasing volume, aggressive opposition from retail traders, and technical confirmation of bearish follow through. If those patterns continue to hold, you can look to levels of Fibonacci Retracements of the 2009-2010 rangeas a target while using prior support to set your protective loss.