US Dollar Index (DXY) in a terminal wave

US Dollar Index appears near a terminal point in the bull market that began February 2018. This advance has taken shape as a corrective structure and therefore we will be on the look out for a top forming. We can count the minimum waves in place for a meaningful high so it is possible DXY may begin correcting lower to 92-94 and possibly down into the mid-80’s.

One USD market that has carved a clean pattern to this point is USDCHF. 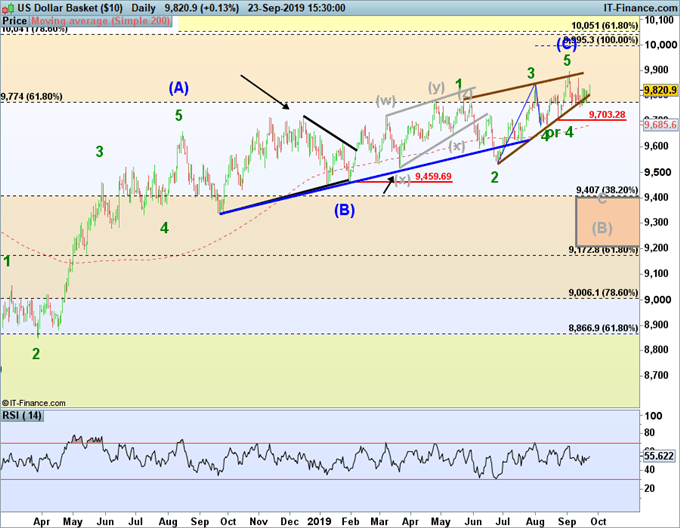 Elliott wave ending diagonal patterns offer good risk to reward ratio opportunities. They are a wedge-shaped pattern consisting of five zigzags. USDCHF began carving this pattern on August 13, 2019 and it now appears finished. If this is the case, the USDCHF price high on September 18 of .9984 is the risk in this scenario. USDCHF is trying to break down briefly poking below the ii-iv blue trend line. A breakdown below Monday’s low would be a sign of further weakness may be coming.

Elliott wave ending diagonal patterns tend to be quickly retraced. The origination of this pattern was the August 13 low of .9660 so that becomes a target.

what is the current elliott wave for USDCHF?

Ending diagonals are just like they sound in that they are ending waves of a larger wave. Ending diagonal patterns appear in only two places of the Elliott wave sequence. They appear in the 5th wave of an impulse or ‘C’ wave of a flat or zigzag pattern.

In this case for USD/CHF, the ending diagonal pattern appears in the ‘C’ wave of a larger flat pattern. Therefore, the higher probability move for USDCHF is towards new lows below .9660. 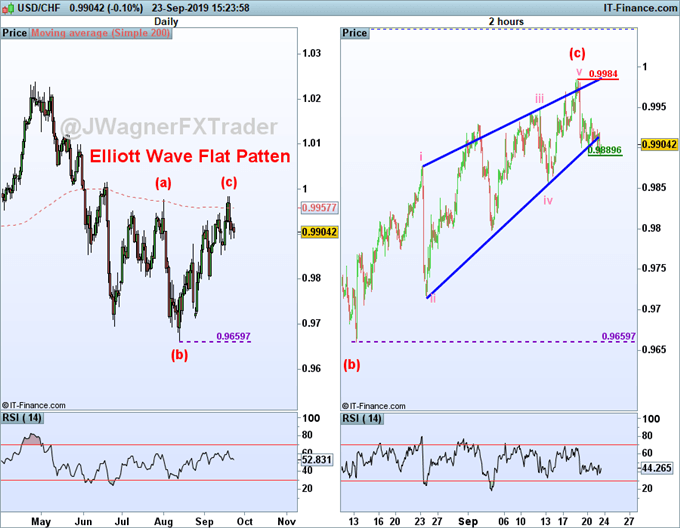 So long as USDCHF holds below .9984, the Elliott wave pattern is bearish anticipating a multi-hundred pip move. The origination of the ending diagonal pattern at .9660 is a price zone to watch.

A rally above .9984 suggests the interpretation of the ending diagonal pattern was incorrect.