The Elliott wave pattern for silver and gold suggest the uptrend is becoming exhausted. The EURUSD down trend is mature and may be approaching a pivot.

The video above is a recording of a US Opening Bell webinar from September 23, 2019. We focused on the Elliott wave patterns for key markets such as silver, gold, DXY, EURUSD, USDJPY, and GBPUSD.

The large performance and rally in silver prices today keeps the door open to an ongoing bullish impulse wave. If this is the case, wave 4 of silver has finished or may become an Elliott wave triangle pattern. Either way, more strength is not out of the question in the short term.

If wave 4 has already finished, then wave 5 has begun towards higher levels. The fifth wave may run into resistance near $20-21.

If wave 4 is still in progress as an Elliott wave triangle pattern, then we may be rising in the ‘B’ wave. Therefore, it is quite early to provide estimates and wave projections. The ‘B’ wave could move beyond $19.65 though it doesn’t have to. The point to remember with triangles is that they are sideways consolidation patterns and three more legs would appear (waves C-D-E).

Bottom line, this up trend in silver that began in May is mature. The bulk of the move appears behind us though some tradeable opportunities may continue to exist. 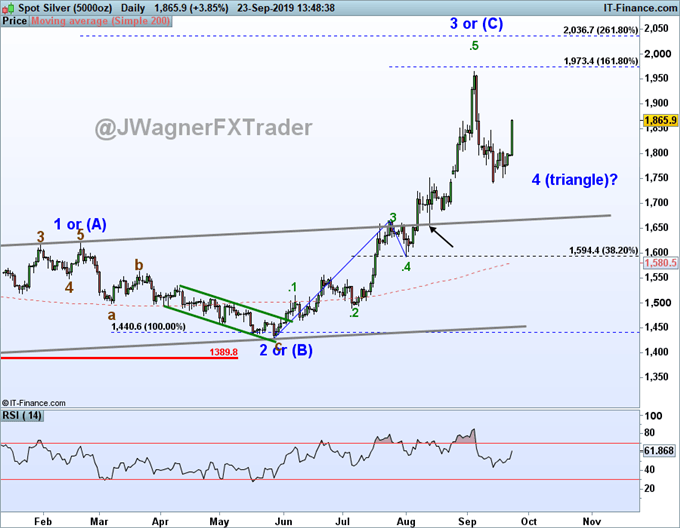 The Elliott wave gold price forecast is unclear at the moment. We can count an incomplete bullish trend still in play. We can also count a medium term top in that points towards a mild correction.

Looking at the weekly chart for gold prices, we are viewing the uptrend from the 2015 low as a (W)-(X)-(Y) double zigzag. We are within the terminal wave, the (Y) wave. This trend has moved higher at a quick rate so a correction to $1400 to alleviate overbought pressure is feasible. If gold prices continue higher, a zone to watch is $1600 as this is where a couple wave relationships rest.

Bottom line, if gold prices continue to rally, keep an eye on $1600. 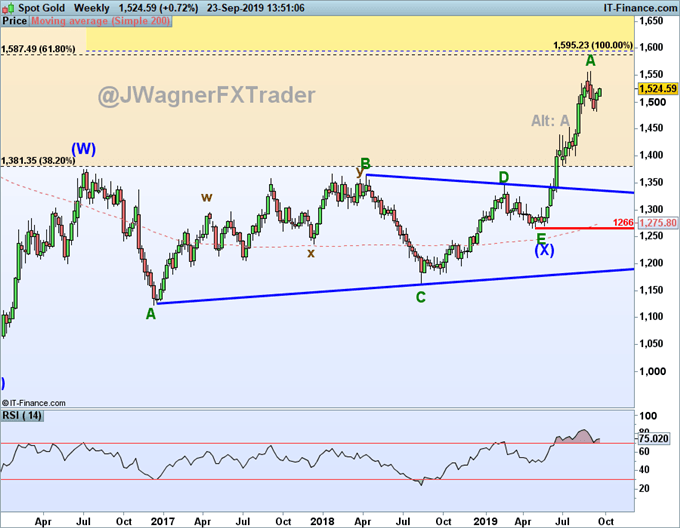 EURUSD may be approaching a bullish reversal

EUR/USD continues to slowly work lower without much momentum. The EURUSD Elliott wave forecast is that we are in a terminal wave of a larger bearish wave that began February 2018. It is possible to count this wave as complete. However, the sluggish nature of the pattern may allow it to dig a little deeper.

Any dip below 1.0926 is seen as a temporary move according to the Elliott Wave Principle. Therefore, we are beginning to bias a bullish move. From not much further lower, a rally back to 1.18 and possibly higher levels (like 1.20 or 1.25) are not out of the question.

If EURUSD does break above 1.1110, then the chances improve that a low is in place. It is my opinion, that a move below 1.0926 is temporary and delays the bullish trend. If 1.0926 is met, then we will reassess the Elliott wave count accordingly. 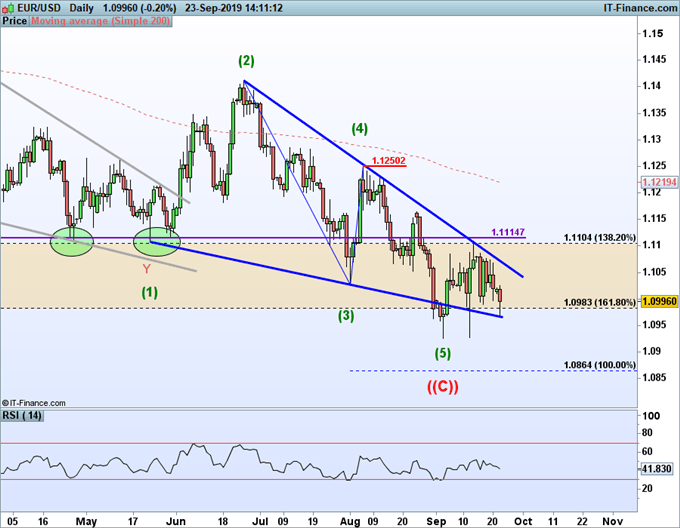